In Nicaragua, workers face a dangerous contradiction—organize within the limits of the government’s corporatist development model, or be shut down. 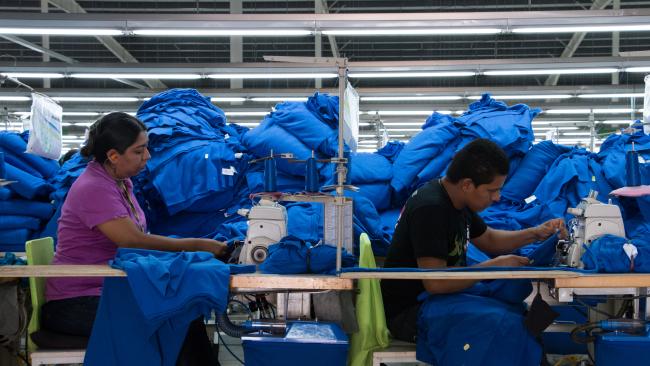 In the cavernous ironing area of the Tecnotex factory complex, around 80 workers spend the workday pressing handheld irons against freshly-sewn garments, dripping in the humidity and heat. In 2012, this was where 22-year-old Darwing Lopez worked.

Tecnotex is part of the Senika Free Trade Zone, located in Lopez’s hometown of Tipitapa, a municipality on the northeast edge of Managua. The area is dense with zonas francas (free trade zones)—sprawling, boxy complexes where hundreds of workers, mostly young people from the nearby neighborhoods, assemble export goods for foreign consumer markets.

While he was working there, Lopez would arrive at seven each morning to start his shift at the factory, where he worked punishing 10- to 11-hour days with only short breaks for water and food. Tecnotex is owned by SAE-A, a multinational textiles corporation based in South Korea, which also operates factories in Guatemala, Haiti, and Southeast Asia. During Lopez’s time there, the factory was producing garments licensed by Under Armour and branded with the logos of university sports teams, destined for the U.S. collegiate market. He made an average of 173 córdobas (about $7) per day, at a rate of 17 córdobas (less than 70 cents) per hour. This was a good job for people his age, Lopez told me—among the best incomes available in Tipitapa.

Like about half the population of Nicaragua, Lopez is a member of the post-Sandinista generation. He was born too late to experience the revolutionary 1980s, when the Sandinista National Liberation Front (FSLN) toppled the Somoza dictatorship and initiated a process of national re-foundation based on local development, popular education, and land reform. Instead, Lopez grew up in an era of aggressive neoliberalization, as successive anti-Sandinista administrations rolled back the revolution’s gains to reestablish profitable conditions for foreign and domestic capital in the country. This included entry into free trade agreements, notably the Central America-Dominican Republic Free Trade Agreement (CAFTA-DR), which opened Nicaragua’s poorest areas to multinational companies in search of cheap labor.

The FSLN returned to national power with the election of president Daniel Ortega in 2006, a result many at the time interpreted as a popular rejection of that neoliberal consensus. Since its founding as a clandestine guerrilla organization in the 1960s, the FSLN had espoused staunch opposition to North American imperialism and a commitment to redistributing wealth to the poorest sectors of society. To Lopez, hulking big-box factories like Tecnotex seemed incompatible with that political vision. In 2012, with Daniel Ortega still in office after a controversial reelection the year before, Lopez and some other Tecnotex employees began to organize a union, which they named after FSLN founder Carlos Fonseca Amador.

The name was a strategic choice, part of the organizers’ delicate plan for confronting a sticky paradox of life in Nicaragua. Despite the left-populist rhetoric of the sitting president, it is exceedingly hard to organize a union in the country, or even to bargain for better wages through an existing one.

It isn’t just zona franca workers like Darwing Lopez who have felt the pinch of Nicaragua’s corporate paradox. The effects of a national government that positions itself rhetorically as the historic defender of Nicaraguan workers while simultaneously frustrating workers’ attempts at self-activity distort nearly every aspect of the country’s economic life. This distortion permeates the free trade zones as inescapably as it does the agrarian sector, and exerts itself as powerfully in foreign-owned gold mines as it does in the historic sugar mill where Nicaraguan Flor de Caña rum is produced.

Today, the country is reeling in the aftermath of a sustained insurrectionary challenge to Daniel Ortega, which began in April 2018 and continued for months, when roadblocks paralyzed the country and protests beset Managua. During the crisis, the Superior Council of Private Enterprise (COSEP), the major political representative of the private sector in Nicaragua and a stalwart Ortega ally for over a decade, formally separated itself from the administration. After some initial hesitation, COSEP assumed a clear role in the opposition, first through participation in the aborted National Dialogue in May 2018, and now inside coalitions like the Blue and White National Unity and the Civic Alliance, where it is joined by other private sector groups like the American-Nicaraguan Chamber of Commerce (AmCham).

The private sector is not homogenous, and it contains a range of actors that sometimes work at cross purposes. Predictably, then, the private sector has played a contradictory role in broader opposition politics. On the one hand, because of their control over commerce in the country, business interests have sometimes been able to exercise control over the opposition agenda, including through the single-day paros (business strikes) that have shaken Ortega’s legitimacy at several key moments over the past year. But on the other hand, some prominent private sector representatives have routinely declined to take a clear position on whether a solution can be negotiated without Ortega’s removal, playing a moderating role against a more radical consensus within the opposition movement that demands the president’s ouster is a prerequisite for any meaningful reform. Inside coalitions like the Blue and White National Unity, some movement-oriented opposition figures are suspicious of COSEP, and wonder just how definitive and permanent its break with the Ortega administration truly is. Further complicating the private sector’s role are figures like agribusiness magnate (and FSLN economic advisor) Bayardo Arce—one of the many Sandinista entrepreneurs whose enterprises are thoroughly imbricated with the FSLN and for whom Ortega’s removal could be catastrophic. This ongoing political crisis in Nicaragua has demonstrated the instability of President Daniel Ortega’s governing strategy, under which the FSLN positions itself as both a steward of private profits and a benefactor of Nicaragua’s poorest sectors. The FSLN government’s supporters on the international left defend its socialist credentials by pointing out its success in reducing extreme poverty through generous social welfare grants, which have been undeniably positive. But they often leave the contradictory position of the FSLN government towards Nicaraguan workers and their organizations unexamined. The April uprising and its aftermath have made clear that it is impossible to apprehend the current crisis in Nicaragua solely in terms repurposed awkwardly from the Cold War. It is instead necessary to look again at the class dynamics at play in the country, and at the effects of the FSLN’s economic policies on labor.

Labor relations in the free trade zones and throughout the Nicaraguan private sector are governed by a tripartite agreement between the state, represented by the Ministry of Labor and the Free Trade Zone Commission; employers, represented by various chambers of commerce and sectoral business associations; and official union federations, whose role is to maintain labor peace in historically contentious labor environments. The “Tripartite Agreement for Labor Stability and Productivity in Free Trade Zones,” first passed in 2008 and later renewed in 2012, establishes a prevailing wage across the free trade sector, which increases periodically according to a predetermined calendar. In exchange, employers like SAE-A Tecnotex receive the promise of stability—no days lost to work stoppages, something that was nearly impossible to imagine prior to this agreement, when Nicaragua’s fledgling maquila sector was famously lively with strikes and walkouts.

Daniel Ortega’s government has negotiated tripartite agreements like these for nearly every business sector in Nicaragua since taking office in 2007, exploiting the FSLN’s historically strong presence in the union movement to facilitate negotiations with some of the party’s newer allies in business. Stabilizing the free trade sector paid especially great dividends. Foreign direct investment increased dramatically during Ortega’s 2007-2012 term, and new maquila factories proliferated as Nicaragua entered into additional free trade agreements with Taiwan (2008), Mexico (2011), and the European Union (2012). By 2012, one in six of all employed formal sector workers in Nicaragua worked in a free trade zone—a labor force comprising more than 100,000.

Álvaro Baltodano, a former Sandinista general and secretary of the Free Trade Zone Corporation in 2012, characterized this tripartite agreement as the FSLN’s attempt to add a social dimension to CAFTA. Lopez, however, came to see it as a way to pacify shop-floor demands, enlisting paternalistic union federations as partners in employers’ efforts to identify and isolate troublemaker workers. “The union federations always tell workers to organize themselves, that they will provide accompaniment and help later,” he told me via text message in May 2019.

But in reality, he alleged, these federations often frustrate workers’ attempts to organize by establishing arbitrary procedural barriers, delaying approval processes, and turning a blind eye to illegal firings of workers who reject their paternalistic structure. “The workers who want to organize themselves end up run out of their jobs and blacklisted so they can’t work in the free trade zones again. That’s how they maintain the fear that they cannot organize,” Lopez wrote.

Jonah Walters is a Ph.D. candidate in geography at Rutgers, The State University of New Jersey, where he studies internationalist development and Nicaraguan workers’ cooperatives.