Caught in the Crossfire: Mothers’ Everyday Resistance in Caracas

The terror faced by women and mothers in Venezuela is often overlooked, as well as their ability to alleviate violence. 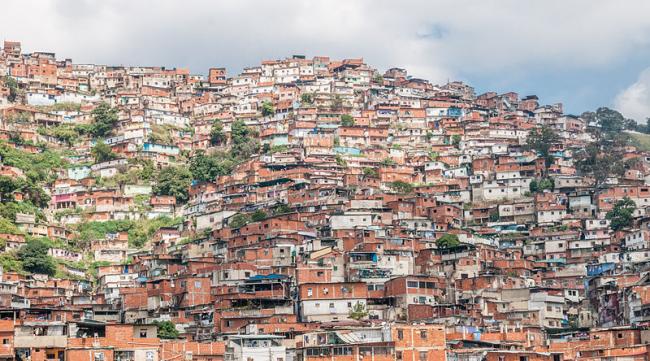 On Friday, July 26, the neighborhood La Cota 905 in Caracas was back in the news because of an hours-long armed conflict—starting at 8 AM, and lasting past 11:30 AM—between members of criminal groups that live in the area and law enforcement agents, specifically from the Cuerpo de Investigaciones Científicas, Penales y Criminalísticas (CICPC). The armed confrontation produced intense responses on social media and digital news. After three hours of combat, the police officers had to withdraw, with four officers injured. Reactions on social media criticized the retreat, pointing to the weakness of the government and superiority of the criminal groups. Nobody asked about the women and the children, or in general about the community members affected by the conflict. The deafening silence revealed the indifference to the suffering of women and children of the most populated parts of the city.

The confrontation with the CICPC occurred exactly four years after President Nicolás Maduro announced the massive militarized Operativo de Liberación del Pueblo (People’s Liberation Operation, OLP) in that same neighborhood, on July 13, 2015. The operation, he said, was designed to confront the “criminal groups, paramilitarism, and Colombian narcotrafficking.” That first operation had resulted in a slaughter: The incursion left 14 men dead. And from July 2015 to July 2017, when the government and criminal groups established a truce, every week, the community was subjected to incursions by armed and hooded officers. The armed clash this July happened 22 days after the Office of the United Nations High Commissioner for Human Rights published a report explicitly adopting a focus on gender and recommending that the Maduro government dissolve the police body that had inherited the OLP operations—the Special Action Police Forces (FAES)—created in July 2017.

Although men experience the extreme violence of extrajudicial executions and carry out armed violence, it is necessary to highlight the invisible suffering of women, and especially mothers. Mothers’ struggles remain anonymous struggles, where actions such as cries, conversations, and gossip are the main resources in the micropolitics of their neighborhoods. These operations, that supposedly exist to “confront criminality,” steal from these communities—and especially from women in their role as mothers—the capacity and space to be able to defend their needs and those of their families. They are consequently thrown into an environment of armed domination by criminal groups, subjugating their children in turn to deeply authoritarian and violent upbringings.

Our reflection comes from conversations and observations we made in the community with women and children over the course of a year. The first thing that caught our attention was that, in effect, there is a pattern of action by police officers, as one of the women we spoke with described: “They break in, they enter with force, they rob whatever they can rob, they kill whatever they can kill. After, they act in a show, a spectacle. And then there is a confrontation, with bullets buzzing through the air! They say it was a confrontation to justify their operation. They have to leave 10, 15 dead. And they say, This was a successful operation! They came to the neighborhood, they quote unquote ‘cleaned it up,’ and they left!” They told us police separated men from children so that they would not see the slaughter of the men. The women would come together, resisting the seizure and killing of their children, brothers, or husbands. Shouting. Some described leaping at the agents. They told us they are insulted, called in the most decent terms “gossip,” because they are the voices that denounce the atrocity and act to protect their families from the state-sponsored terror. A pattern of exploitation also became evident: Systematically, officials would steal food, home appliances, cell phones, and tablets, as spoils of war.

Moreover, this pattern of action is so systemic and widespread that the report from the Office of the United Nations High Commissioner for Human Rights also reported this behavior within the FAES, described by the relatives of victims who were interviewed: “The families of victims described how the FAES broke into their homes, sized their belongings and exercised gendered violence against women and children, including forced nudity. The FAES would separate young men from other family members before shooting them. According to family members, almost all the victims were shot one or more times in the thorax.”

But in the manner of war established by the government, the “juvenile delinquents” of the area reciprocate. And although they try to win over their female neighbors with favors and perks, they also subject them to the armed burden. In this supposed war, there are collaborations with the military that requires grenades to respond, exposing women and children to a daily life of war. They are caught in the middle between official power and local power. And if the gathered women resist, shouting and protecting their families from the police, they are silenced by the local armed groups. One woman told us, “Here we live like animals in the jungle, like the monkey: We don’t see, we don’t hear, we don’t talk. The bullets buzz and one cannot say, ‘Look, don’t shoot through the door of my house!’ We live like camouflaged animals, so they don’t see us, they didn’t eat us, and they don’t attack us.” Indeed, the suspicion of snitching, or in other words, the rumors that circulate outside of the community and to the authorities, is paid for with life. One traumatic event made this clear to the women: one woman was burned in a public space in the community for “gossip.” This event was told to us by multiple women in the community.

The situation these women face contrasts with that of women in another community where we have worked, where, despite a long history of police abuse, there has not been the same devastation from militarized operations and incursions. On the contrary, there has been a long tradition of the presence of religious, educational, and community organizations that resolve common problems. In that community, the women gathered, and in a coordinated action, were able to achieve positions of power to make pacts with local armed groups. In a sort of clandestine collective efficiency, they created spaces free of weapons or regular armed conflicts. The women supported by the local organizations were able to leverage conversational and discursive resources that make up the micropolitics of the neighborhood: talking, shouting, scolding, and confronting the men when they had weapons in public spaces. “Gossip” was the mechanism by which they controlled the actions of armed men. The threat of accusation—while not used—permitted them to destroy armed spaces. Without a doubt, as the well-known work of the sociologist Charles Tilly reminds us, conversations can be understood as political processes in which identities, projects, and courses of actions of social life are permanently negotiated. The women in this neighborhood were constantly in discussion.

The mothers have a leading role in the community collective efficacy, understood as the capacity for coordinated action to deal with common issues in the neighborhood (according to the sociologist R.J. Sampson), since they are the ones who spend the day in the community. Therefore, the support of resources—as well as social organizations that empower women to increase their capacity for collective action to achieve positions of power—are essential for guaranteeing the greater well-being for their families and the community as a whole. We don’t have to assign all the basic duties of the state to women—pacification, the preservation of life, and personal integrity—nor to relegate women to the role of mother. Instead, we should assess the strategic role of mothers to question the power relations in neighborhoods, as well as to strengthen their resources for informal social control through all the discursive maneuvers typical to the role of mothers—scolding, gossip, and whisper networks—which together form neighborhood micropolitics.

Studies in Latin America—and in particular, in Colombia, through the work of Ana Arjona—reveal that communities with the presence and tradition of civic organizations and institutions for conflict resolution have a capacity for coordinated action that allows them to resist, with great force, domination sought by armed actors, as well as to negotiate public spaces. On the contrary, in a complementary way, other works such as that of M.J. Wolff in Rio de Janeiro, describe how neighbors become accustomed to massive abuses from militarized incursions and remain vulnerable to the domination of criminal groups. They are often forced to establish perverse alliances with armed actors.

The experience in Caracas reveals how the policy of the militarization of citizen security actually leaves mothers more helpless, subject to armed power and deprived of the resources that they traditionally use to better their communities. This is an imminent danger in the country, as we remember we are in the weeks after the Office of the United Nations High Commissioner for Human Rights published their report, where they recommended the dissolution of the FAES as well as the installation of mechanisms to investigate extrajudicial killings and reparations processes for victims. Even so, Nicolás Maduro officially affirmed the FAES, saying, “All the support for the FAES in their daily work of providing security to the people of Venezuela. Long live the FAES!”

But another risk is spreading through the region: the support of presidents, without political distinction—such as Jair Bolsonaro in Brazil and Andrés Manuel López Obrador in Mexico—for the militarization of citizen security in their countries. They are kidnapping the power of collective feminine efficacy and subjecting women and children to the escalation of lethal arms, as well as to the more arbitrary and primitive powers of official and local armed groups.

Verónica Zubillaga has a Ph.D. in sociology from the Catholic University of Leuven. She is a professor at Simón Bolívar University and a founding member of the Red de Activismo e Investigación por la Convivencia (REACIN) in Caracas.

This article is based on the findings of an investigation titled “Study about the impact of the proliferation of firearms, illegal economies, and the militarization of citizen security on homicides in Venezuela.”