In Argentina, a "Right Turn" That Wasn't and Left-Peronism's Unlikely Comeback

Sunday's elections in Argentina demonstrate that pronouncements of the death of the Left in Latin America were premature. 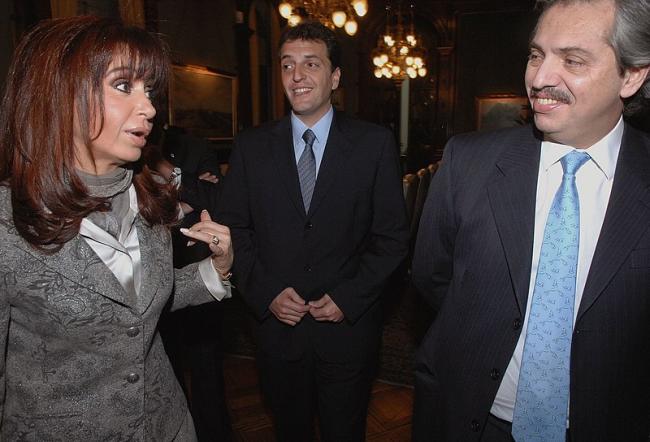 Latin America’s “left turn,” which started in 1998 with the election of Hugo Chávez in Venezuela, is not over, even though its obituary has been written several times. Rather than turning in any clear direction, political winds in the region appear to be blowing in all sorts of directions, with no discernable underlying pattern.

In particular, the victory of left-Peronism in Sunday’s elections in Argentina suggests that writing an obituary on the Left may have been premature. The winning formula, which includes former president Cristina Fernández de Kirchner as vice-presidential candidate and her hand-picked running-mate Alberto Fernández as presidential candidate, obtained 48.1 percent of the votes, well above the 40.3 percent of incumbent Mauricio Macri, who was running for re-election. With two antagonistic camps capturing almost 90 percent of the vote, Sunday’s elections were probably the most polarized elections since Argentina entered its democratic transition in 1983—a polarization that is likely to stay.

Macri’s 2015 electoral victory in Argentina was widely seen as a bellwether of a broader “right turn” in the region—a turn that also spread to countries like Brazil and Chile. In Argentina, it meant something even deeper: For the very first time since the country’s democratic transition, a right-wing political party, in alliance with other parties, gained national power via democratic elections.

Macri’s 2015 victory also signaled the return to power of non-Peronist forces. Since the country’s transition to democracy, not a single non-Peronist president had been able to finish a regularly scheduled term in office. To avoid that fate and build broad societal bases of support, Macri formed a national coalition called Cambiemos (Let’s Change), which united his party, Republican Proposal (PRO), the Radical Civil Union, and the Civic Coalition Ari (CC-ARI). While Macri placed second in the 2015 first-round vote, by uniting the disparate opposition parties he secured 51.34 percent in the second round.

In light of Cambiemos’s victory and the subsequent election of conservative parties and leaders in the region, analysts anticipated the consolidation of a region-wide rightward wave.

Today, however, it is less certain that such a systemic shift was ever truly underway. Instead, Latin American electoral politics appear to follow a routine alternation-of-power type of logic between left and right explained by retrospective, anti-incumbency voting driven by broad societal discontent. In the case of Argentina specifically, moreover, electoral politics appear to have aligned around a left-right axis of competition with two major coalitions structuring the electoral supply. This new configuration, moreover, is marked by high levels of polarization— today, there are two major antagonistic poles that dispute the center.

In light of Macri’s defeat and the comeback of a left-center coalition led by the Peronists, and backed by progressive parties and movements, it is useful to reflect on the factors that impeded the consolidation of a “right turn” in the country. What explains the failure of Macri’s first experience of government and the weakening of his support coalition? What are the reasons behind the strengthening of opposition forces on the left? And finally, what are the relevant domestic and regional implications of these trends?

The Failure of the Pro-Market Project

Cambiemos’s electoral defeat expresses the loss of a "historic opportunity" for a center-right party to carry out its desired free-market reforms aimed at dismantling the statist economic model hitherto in place—one based on the domestic market, wide social protections, and state intervention in the economy.

The difficulties of Cambiemos's reformist program can be explained by three political factors:

First, the Macri administration did not have enough political resources to carry out its program. Its electoral coalition was not consistent in programmatic terms, and coalitional partners were among the first ones to block and/or promote substantial modifications to some key government proposals, including the pension reform. They also opposed measures implemented by the government, such as the dramatic reduction of subsidies to public services.

Second, the business world, which formed a core societal ally for Macri’s coalition, did not provide consistent political support to the Macri administration. Instead, business owners maintained a short-term, particularistic, and poorly coordinated behavior. For instance, business owners did not carry out any coordinated action to support the reforms that the government wanted to carry out. In addition, business was not a consistent financial support in terms of increased private investment. After the 2018 crisis, a non-trivial part of Argentina’s business class asked Macri to not run for re-election. They proposed both an alternative candidacy within the Cambiemos coalition, as well as one outside of the coalition, noting a declining electoral support for Cambiemos.

Third, the policy legacies of the previous Kirchnerist governments weighed in as severe obstacles to Macri’s reformist project. On the one hand, social policies implemented during the Kirchnerist governments constrained attempts to make drastic cuts on public spending, given the visibility and popularity of some of those policies. On the other hand, trade unions and social movements representing informal popular sectors retained a high mobilization capacity and blocked attempts to remove state protections—the inability of Macri to pass labor reform is an egregious example of this.

These three factors, when combined, formed a perfect storm. And once the government lost access to international credit and asked the IMF for a bail-out—the largest in the IMF’s history—the government began to lose its capacity to maintain expectations and support from social sectors that had been important to its rise, including large segments of the middle-class.

Cambiemos ends its four years in government with a dire economic record and unable to consolidate a viable economic model. Though weakened, it leaves office with a relatively high level of support among the electorate, especially in the country’s metropolitan area. Cambiemos won big in Argentina’s “metropolitan” region—including in the provinces of Entre Ríos, Santa Fe, Córdoba, and Mendoza, and in the Autonomous City of Buenos Aires. It also did very well in the agricultural productive core of the country. Precisely, the agrarian vote has been identified as part of the Cambiemos’s core constituency, which was validated in these elections. This socio-economic anchor, as well as Cambiemos’ electoral and legislative strength, configures a force that the future government will have to reckon with.

Has “the Left” Returned?

It’s the economy, che! Cambiemos’s defeat in the 2019 presidential elections can be largely explained by its poor economic performance. This was particularly damaging because Cambiemos led a government that presented itself as the only one capable of redirecting Argentina toward a path of sustained economic growth.

But it’s not just the economy. In spite of its terrible economic performance, Cambiemos maintained a significant level of support.

The strategic ability of the opposition, dominated by center-left Peronism, must be taken into account to explain the success of the Left. Thus, Cambiemos’s defeat also offers an account of the Left’s continued vitality. Parties widely discredited a few years ago, especially due to corruption allegations, were able to maintain a relatively high core of adherents while in opposition—and from that base they built alliances with moderate actors.

How, then, can we best explain the continued vitality of the Left?

Kirchnerist Peronism left power in 2015 with a high degree of discredit among its non-core supporters. Accusations of corruption and judicial convictions against some of its leaders created the image of a retreating force.

However, Kirchnerist Peronism remained a weighty actor in opposition. First, it maintained strong ties to its core constituency, which consists of informal sectors of the popular classes and progressive sectors of the middle classes. It kept strong connections with its societal core not only through the memory of the good old days of redistributive policies associated with the commodity boom, but also because there was no major shift in the political orientation of its main leader, Cristina Kirchner. In fact, representatives of Kirchnerism in Congress were among the most visible opponents of the bills proposed by the Macri government. This programmatic alignment runs counter to the conventional wisdom on Peronism—which would have anticipated more leadership pragmatism and ideological eclecticism.

Second, after the defeat of Kirchner Peronism in the 2017 midterm elections, Kirchnerist leaders began to rebuild relations with non-Kirchnerist Peronist leaders to form a coalition. Cambiemos’s failed economic policy enabled this approach. It also facilitated alliance-building with other center-left parties.

By 2017, the Kircherist Left that governed until 2015 became, rather quickly, the new core of a broader opposition coalition. The coalitional character of this opposition must be stressed, since all its components are not necessarily a part of the Peronist movement—and some splintered from Peronism during the Kirchnerist governments.

The Left might return to power with the Fernández-Fernández formula, but it will look and govern differently than it did during the Kirchnerist governments. It will be a broader center-left coalition formed by the Peronists and backed by a wide array of progressive parties and movements.

The new leftist government will face many challenges. It will be especially hard to keep the governing coalition together and to maintain broad electoral support in a society that accumulated so many pressing demands during the ongoing Argentine economic crisis. Macri will leave office in the midst of a profound economic recession, and Fernández will inherit extraordinarily high levels of debt, soaring inflation, and rapidly rising unemployment and poverty levels. Fernández’s “honeymoon” period, as some of his allies openly say, will be short. In addition to having to reconcile the multiple demands from his coalitional partners, he will likely encounter strong opposition from Cambiemos.

Macri’s loss, the resilience of left-Peronism and its unlikely comeback have far-reaching regional and domestic implications.

Clearly, the political winds in the region have shifted when compared to the early 2000s, when about two-thirds of all Latin Americans lived under some form of leftist government.

Since 2015, left parties and governments have experienced a number of electoral defeats in a number of former stronghold—not only in Argentina, but also in Chile and Brazil. Right-wing presidents govern today in Colombia, Guatemala, Paraguay, Honduras, Panama, and Peru, as well. In light of the series of victories by conservative parties in the region, and particularly after the election of Jair Bolsonaro in Brazil, astute observers proclaimed a region-wide shift to the right.

However, the counter-cyclical election of Andrés Manuel López Obrador in Mexico in July 2018 suggested that it was premature to write the obituary of Latin America’s “left turn.” The recent Fernández’s victory in Argentina adds a further challenge to that thesis and defies any notion of a systemic rightward shift in Latin American politics.

Rather than a rightward shift, trends in Argentina—and probably beyond—are better understood as a reinforcement of the post-neoliberal left-right programmatic structuring of political competition. In our assessment, both right and left turns in the country—in 2015 and 2019, respectively—followed a routine alternation-of-power dynamics explained by anti-incumbency voting in contexts of deep economic crises after the end of the “commodity boom,” strong inflationary pressures, and broad societal discontent.

Despite all the drama in the lead-up to these 2019 elections, in short, electoral politics in Argentina appear to have aligned around a left-right axis of competition with two major rival coalitions—Peronists and non-Peronists. It remains to be seen if the high degree of political polarization in the country will allow either of these coalitions to govern with broad consensus and redress postponed needs.