On November 19, surviving family members of a 2003 massacre in El Alto are urging the U.S. Eleventh Circuit Court of Appeals to reinstate a $10 million judgement against Bolivia's former president and defense minister. 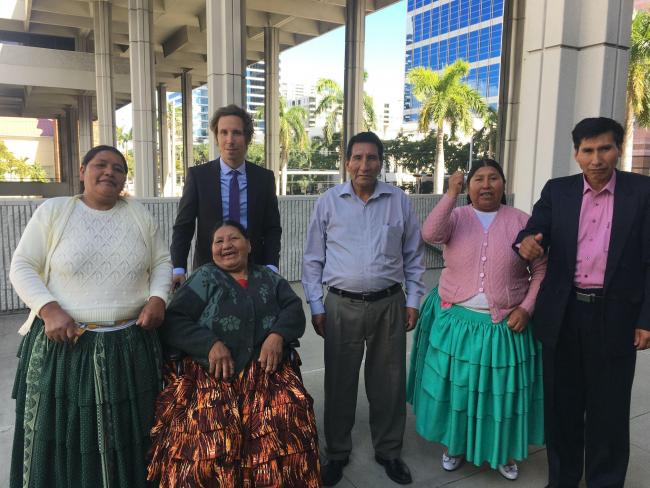 Teofilo is one of the nine plaintiffs in Mamani et al v. Sánchez de Lozada and Sánchez Berzaín, a U.S. federal lawsuit against Bolivia's former president and defense minister.

Last week in Bolivia, a president resigned under military pressure as civilian supporters of different political parties clashed in the streets. Bolivia is in turmoil today, and not for the first time. Sixteen years ago, at a time of political protests against the government’s plan to export Bolivian gas through Chilean ports, the army opened fire on civilians in the city of El Alto, killing over 70 people, including my wife and our unborn child.

One way to stop such violence is to provide justice for past acts: to hold accountable those in command of the forces that shoot at unarmed civilians. That is why I am in Miami today. Together with eight fellow plaintiffs who also lost loved ones in the massacre, I will continue to appeal the decision to overturn a ruling that held the masterminds of these killings responsible.

When the Eleventh Circuit hears the appeal in what is known as the Mamani case today, it will be an important test. Can the legal system deliver justice for people like me? From a young age, as an Indigenous Aymara person growing up in Bolivia, I was taught that the answer was “no.” Although my country has the largest population of Indigenous peoples in South America—about 60 percent—we have always been treated as second class citizens. We did not have political or economic power. We did not have a voice. And our lives did not have much value.

In 2003, during what has become known as “Black October,” a soldier shot my pregnant wife, Teodosia, while she praying in her sister’s home. Over a period of several weeks, Bolivian soldiers, acting under the command of former president Gonzalo “Goni” Sánchez de Lozada and his defense minister Carlos Sánchez Berzaín, massacred Indigenous Bolivians. Soldiers injured over 550 people and killed more than 70, including my wife and our unborn child.

After my wife was murdered, I did not know what to do. The love of my life was gone, and I was left alone to raise our seven children. Rather than simply mourn, though, I joined with others who had survived Black October. We decided to make the system work for us.

We lobbied, advocated, protested, and ultimately mobilized the Bolivian government to launch a Trial of Responsibilities before the Bolivian Supreme Court. After two years of hearings, that court found the defendants—Goni’s entire military high command, as well as two of his ministers—guilty of genocide.

But the two men most responsible for the violence, Goni and Sánchez Berzaín, had evaded justice at home by fleeing to the United States. Goni settled into a new life in Chevy Chase, Maryland, while Sánchez Berzaín took up residence in Coral Gables. We refused to accept that outcome. So my fellow plaintiffs and I followed them to the United States to hold them accountable.

People said that we were crazy. That Goni, one of the wealthiest and most powerful men in the history of Bolivia, was untouchable. That there would be no justice for us here.

After a decade of hard-fought litigation, in 2018 our case—Mamani et al v. Sánchez de Lozada and Sánchez Berzaín—finally went to trial in federal court in Florida. The trial itself was no small victory. I felt proud, after so many years of searching for justice, to hold these two men to account in their adopted country, to finally have the opportunity to confront them face-to-face, and to personally tell them that they were responsible for my wife’s death.

Following a three-week trial and a week of deliberation, a unanimous jury found both men liable for extrajudicial killings. That ruling sent a powerful message and became an example for the entire world: No one is above the law. No government can kill its own people.

Sadly, two months later, the trial court judge overturned the jury’s verdict. Of course this hurt and frustrated us, that one judge could undo what 10 jurors had unanimously decided.

But we have faith that the Court of Appeals will see what the Bolivian people, the American jury, and even Goni’s own political party—which has committed to extradite him back to Bolivia to finally stand trial there—all see: that Goni and Sánchez Berzaín are responsible for these killings, and that justice must be done.

My compañeros and I won’t rest. In our community, in our country, we know that change only ever comes from fighting for it—non-violently, with dignity, strength, and patience. We have always struggled and persevered. And we know the truth is on our side. As long as there is life in us, we will keep working for justice.