The Search for Answers in Mexico (disponible en español)

As the 5th National Search Brigade for Disappeared Persons continues its work, the main obstacle is the state. 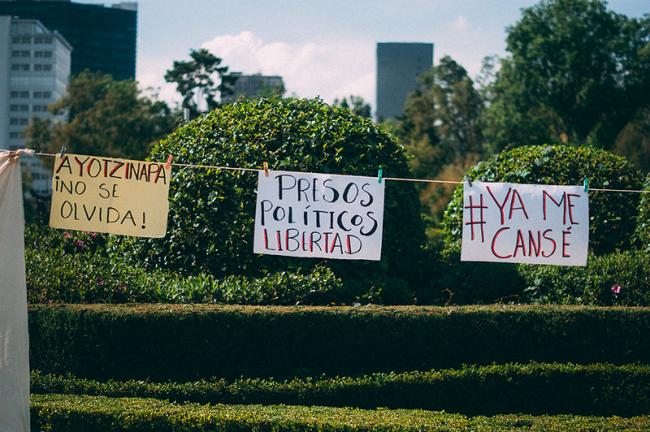 When the bus of relatives of disappeared people from all across Mexico arrived at the Medical Forensics Institute (SEMEFO) in Tuxpan, Veracruz, the several dozen people quickly realized they wouldn’t fit in the room authorities had prepared. The people aboard were members of the 5th National Search Brigade for Disappeared Persons: relatives of the disappeared, most of them mothers, as well as activists, volunteers, and journalists. The visit to SEMEFO was among dozens of activities planned for the two weeks in Veracruz, primarily around the cities of Papantla and Poza Rica.

It was around 11 AM on a rainy Thursday in February. The bus, trailed by another van of brigade members, had driven two hours from Papantla. At the SEMEFO, they would review photos of all the unidentified bodies that had arrived at the institution in Veracruz’s Northern Zone in the last six years. Inside the bus, people dozed off, some served coffee in styrofoam cups from a plastic jug, and others ate snacks they’d brought.

Mexico’s crisis of forced disappearance is a forensic crisis. The official count of disappeared people, since the beginning of the drug war in 2006, is just over 61,000. Given the low rate of reporting, the real number could be 10 times that amount. The pervasive negligence around forced disappearance extends to medical forensic institutions. Currently, around 37,000 unidentified bodies lie in government institutions across the country. Family members of the disappeared have taken on the task of searching for their loved ones. This year’s 5th National Search Brigade brought together nearly 300 family members from collectives all over Mexico. In addition to conducting field searches for human remains, the brigade led workshops in schools, churches, and government institutions.

This year, for the first time, they visited SEMEFOs, prisons, and rehab centers. At the SEMEFO in Tuxpan, the brigade once again encountered the chronic institutional neglect that has pervaded their searches for disappeared family members. 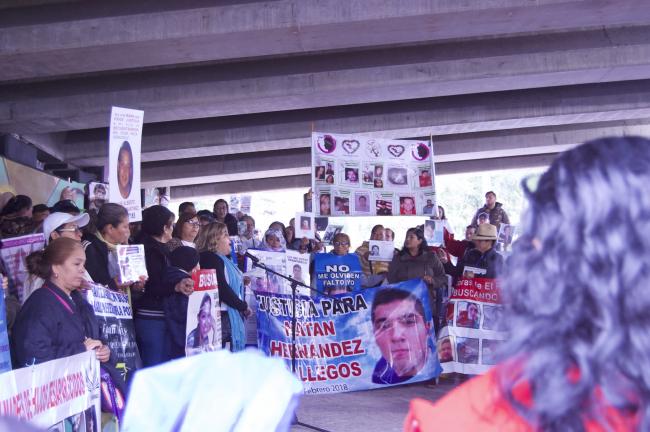 After an hour waiting for instructions from local authorities, the bus drove to the nearby offices of the district attorney, a drafty two-story house converted into offices several blocks away. For security, the family members turned over their cell phones and IDs, and they filed into a cramped conference room where they would look through the files on the screen of a laptop computer. A dozen volunteers and journalists waited downstairs to enter the room in shifts. It was after 1 PM by the time the authorities deliberated and told the group they’d move to a larger space. They directed the brigade back to their bus and to the 39th Infantry Battalion in Military Zone 19, apparently one of the only public buildings with space to hold the brigade members. Around 2, the brigade members disembarked from the buses yet again on the pristine grounds of the military base. The presentation would take place in a room off of a cafeteria.

The PowerPoint presentation finally began at around 2:15, three hours after the group had first arrived at the offices. Each slide presented one to three photos underneath a list of corresponding data: location found, date, file number, sex, name, prosecutor, investigator. The slides included no fields for distinctive markings such as scars, moles, tattoos, missing teeth. Slides showing remains still wrapped in clothing included no description of the clothing, nor details about the clothing’s sizes. Some photos depicted bones scattered across the dirt, their details indistinguishable, with no indication of scale, nor the type of bones found.

The family members gathered quickly raised protest. A few slides in, the presenter, the director of the local SEMEFO, flicked past a photo of an unidentified female torso after reading off the data listed. The women gathered asked her to go back. “There’s a tattoo of two hummingbirds,” one of them called out. “Why didn’t you say that?” Tattoos remain visible on bodies long into the decomposition process. Many of the mothers mention their children’s tattoos as one of the only ways to identify them.

The director enlarged the photo across the screen. The torso displayed a brightly colored tattoo, which, upon further examination, seemed to be a purple butterfly surrounded by flames. It was not clear whether the tattoo was located on the body’s shoulders or lower back. “It’s not specified in the file,” the director said. The director repeated, as she had said several times and would continue repeating throughout the next several hours, “This is the information we were given.”

Officials explained to the families gathered that some of the data presented dated back to the previous administration. The SEMEFO had taken DNA samples of all the bodies. If anyone was interested in knowing more about a particular set of remains, they could take down the case number and solicit the rest of the file from SEMEFO.

The family members spent the next few hours taking notes on body after body. After a few brief moments of back-and-forth with the officials, they asked to skip the slides that included only bones with no distinguishing characteristics. Aides passed around Coca Cola and boxed cookies. The officials took turns reading the slides:

“This body was found December 4 in Poza Rica. This person had a tattoo.”

“This body had a rosary.” 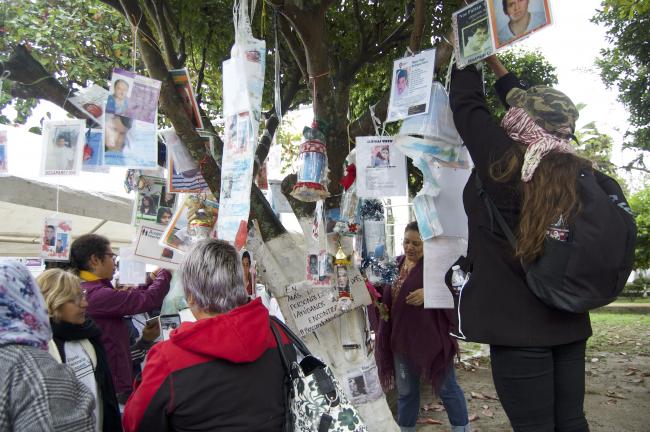 About three hours in, the exercise was interrupted: The Battalion needed the room after 5 PM. The group returned to the buses. The officials directed them to a local middle school, where they arrived after dusk fell. The presentation of photos of human remains continued in the school library as teenagers milled about outside.

The omissions ranged from negligent to laughably incompetent. One photo of the face of an older man was accompanied by two photos of tattoos on young skin of a markedly different tone. Some files showed only tattoos with no indication as to their position on the body. One photo of a complete body, fully preserved, yet to decompose,  was labeled as “bone fragments.” Some of the photos bore the bluish, grainy quality characteristic of a flip phone. Several showed just half of a tattoo, its identifying details indistinguishable. The family members strained to identify the letters of a word or a phrase of a tattoo in a blurred photo stretched across the screen: What name did it say? Is that a forearm or a calf?

Some slides showed only photos of clothing scraps. The officials dawdled to painstakingly describe each one. “This looks like a gray shirt—or is it blue?”

The photos displayed no trace of any system of standardization. Some slides showed only profiles of heads, others only fronts. Some slides showed photos of faces without photos of bodies—despite the bodies having been found complete. None contained any autopsy information—indicating, for example, whether a person’s missing teeth had been knocked out before or after their death. One slide showed nothing but a bracelet.

Many of the people gathered had experienced this sort of negligence before, in a SEMEFO in their home state. SEMEFOs are administered by state-level prosecutor offices and are allocated by region. Some had already seen those same Powerpoints and asked the same questions. The tattoos left unphotographed could be the same ones that they had painstakingly described to countless officials. While they spend their weekends searching for clandestine graves, their loved ones’ remains could be under the care of the government, its data buried deep in the archives.

In December, the National Search Commission for Disappeared People (CNBPD) approved the creation of an Extraordinary Mechanism for Forensic Identification, a measure previously recommended by the Inter-American Commission on Human Rights. The organ would convene independent forensic experts to supplement the state’s forensic capacity—in a similar capacity to the independent group convened to investigate the Ayotzinapa case. The organ still has yet to be created, though, and in March, the Commission once again examined the situation.

Around 7PM that evening—eight hours after they arrived in Tuxpan, five hours after they began viewing the bodies—the brigade members began to grow tired. They closed the session, proposing to the SEMEFO officials that they reconvene a week later, in the complex where the brigade was staying in Papantla, where they’d have plenty of space and no time restrictions. The search would continue.