As Paraguay fights off a global pandemic, the govenment is debating—perhaps misplaced—reform. 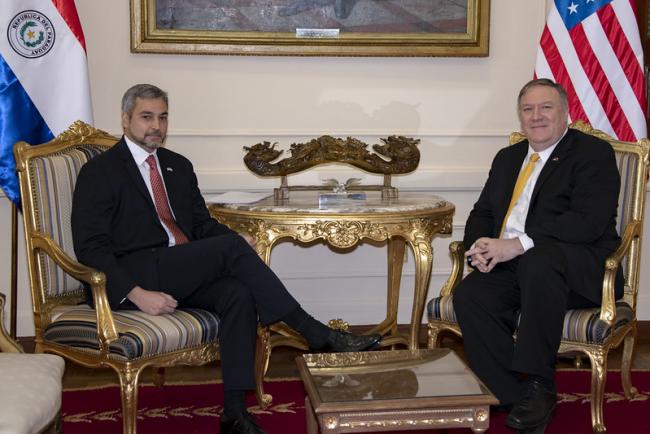 As Paraguay enters its fifth week of total quarantine, the landlocked country is reporting some of the lowest rates of COVID-19 infection in South America—206 cases and 8 deaths to date. While there are concerns over low testing rates, these low levels are largely attributable to strong early measures deployed by the government to control the disease. However, despite this relatively limited health impact, the pandemic is fueling changes in Paraguayan politics that would have seemed unlikely just a few weeks ago.

Large numbers of citizens have armed vocal complaints—largely on social media—stemming from perceptions of economic injustice in the underlying structure of a political system whose deep weaknesses have been laid bare by the coronavirus emergency. Surprisingly, the government has appeared to listen to their concerns by setting in motion a process that is ministers are widely dubbing “state reform."

Nevertheless, it is unclear whether this proposed reform can address the economic and structural problems of public institutions plagued by underfunding and one of the highest perceived levels of corruption in Latin America according to Transparency International. Critics warn that this “reform” may be simply aimed at easing tensions unleashed by the current situation and not at challenging the status quo of Paraguayan political and economic structures.

As in other Latin American nations, the COVID-19 pandemic has thrown light on and exacerbated long-standing societal and political issues in Paraguay, increasing the population’s sensitivity to perceived injustice within the public apparatus.

Citizen protest brought widespread desire for political change to the fore in Paraguay over recent weeks. This has mostly been waged by locked-down citizens on social under #bastadeprivilegios (no more privileges) and through cacerolazos—the organized banging of pots and pans en masse. The campaign points to bloated salaries, nepotism, and large numbers of employees within the public sector as ethically and economically unsustainable in the current crisis.

Analysts have written that the crisis is emphasizing the Paraguayan state’s general incapacity to guarantee basic services. For example, there have been continual reports in local media of large numbers of families—many of whose breadwinners work in the enormous informal economy—going hungry and penniless as institutions struggle to provide support under a total lock-down scheduled to run until April 26.

The poor condition of the health system—already ravaged by a recent dengue fever epidemic and lacking in key equipment—has also been a key source of worry. On March 6, The Pan American Health Organization announced that Paraguay was on a list of countries in the Americas with the most vulnerable health systems to which it would be sending special support teams.

These factors—coupled with concerns over increased public debt resulting from $1.6 billion in loans approved as part of a State of Emergency Law to deal with the crisis—have turned attention to the use of public funds and the perception of an oversized state.

This is by no means a new complaint. While the public, important figures and some lawmakers have been calls for these changes for years, previous legislative attempts to restructure spending lacked support in Congress. This is perhaps unsurprising considering the vested interests of legislators.

During the present crisis, the government of Abdo Benítez—a member of the long-ruling Colorado Party, which has historically protected and increased privileges in the public sector—has been receptive to these demands from citizens. The president even declared himself an “adversary” of high-earning employees of the Itaipú Dam—an enormous hydroelectric dam joint owned with Brazil—who declared they would not conform to a presidential decree restricting public-sector wages for three months to finance crisis response.

When the government announced on March 30 that it would act to reform the state, it framed the decision as an effort to address the concerns of the population. Vice-President Hugo Velázquez stated that officials were acting to address “the wish of citizens.”

Finance Minister Benigno López said that the reform would look to improve the quality of public spending and shrink the state by reducing the number of public employees. He said that these cuts would allow for the universalization of the public health system and improvement of other areas of state functions in the country with the second-lowest level of human development in South America.

On April 18, the Senate approved a law limiting perks and stopping public employees from earning more than the president (around $5,600 per month). This first piece of “reform” legislation will now go to the lower house and then the executive branch for approval.

Marcello Lachi, a political scientist at the Germinal Research Center, is highly skeptical of many of the measures being proposed by the government. He said that the intense focus on wages and the number of public employees is a red herring and will by no means provide enough funds to improve the state’s functioning.

Indeed, despite frequent references to an oversized state, the percentage of people working in the public sector in Paraguay (10 percent) is much lower than in neighboring countries and below the average for Latin America and the Caribbean.

“Paraguay doesn’t have a big state,” said Lachi, “and 75% of public employees work in healthcare or education. And we’re going to cut that?”

Lachi does not think this initiative can generate sufficient funds for state improvement. Economist Verónica Serafini wrote for the Centro de Análisis y Difusión de la Economía Paraguaya that the state must double its spending on health over the next 5 years—a $1 billion increase. Many other basic services are in urgent need of funding.

Given these factors, the Paraguayan public’s focus on spending and state employees seems misplaced. Lachi believes this vision has long been fueled by a Paraguayan press dominated by the interests of the economic elite, and that the government is pushing it as official policy during the coronavirus crisis.

“It’s populist demagoguery. Just because we ourselves aren’t doing great, we’re going to take a swipe at others to make ourselves feel better. Those in government prefer to attack these sectors in order to stop people realizing that the real victims of this demagoguery should be the country’s extremely wealthy, powerful families.”

While acknowledging the extreme importance of dealing with corruption, Luis Rojas, economist at the Heñoi Research Center, said that any reform efforts must be aimed at addressing the heavy inequality and poor taxation policies in Paraguay.

“A structural reform of the state requires tax reform. The state collects very low levels of tax from sectors with enormous earnings,” he said. “More is collected from the middle and working classes than from the upper class.”

This unequal tax policy translates to an extremely low amount of funding for the state. Paraguay has the second-lowest level of tax collection in Latin America and the Caribbean, according to the Organization for Economic Co-operation and Development. Just 13.8 percent of Paraguay’s GDP is collected as taxes by the state, in comparison to an average of 22.8 percent for the region.

Despite going through an economic boom in recent decades based around an ever-expanding soy industry, Paraguay has seen little money go into its public purse. Last year, an attempt to raise the tax on soy exports to 15 percent from 10 percent—the current rate in neighboring Argentina is 33 percent—was rejected by the Senate. Until 2018, the soy export tax sat at 2.5 percent.

Close ties between the political and economic elites in the country allowed for the construction of this tax system that greatly benefits the rich and continues to allow for the concentration of wealth in a small section of the population.

In her report, Serafini writes that properly taxing soy exports and increasing the extremely low taxes on tobacco, alcohol, and junk food—all industries controlled by the economic and political elite—wouldprovide sufficient public income to properly fund the health system. These changes would also reduce health spending on illnesses related to consumption of the latter products. Implementing a fairer personal income tax would allow for a much higher tax burden and better fund its institutions: Four of the five richest people in Paraguay paid no personal income tax in 2019.

However, the prospect of tax reform does not seem likely. Finance Minister Benigno López already stated that tax reform at this time “would lead to an unnecessary bad mood” and announced that the government is not considering these types of measures.

In addition, the powerful Rural Association of Paraguay (ARP) and Paraguayan Industrial Union (UIP)—which represent powerful economic groups in rural and urban Paraguay— have been notably present in the reform debate, strongly throwing their weight behind the current plan of shrinking the state.

Nonetheless, the opposition Frente Guasu political alliance, led by deposed president Fernando Lugo, has presented a progressive tax reform proposal that could do much to balance the books. It claims that this proposal would allow for effective management of the $1.6 billion in credit that Congress approved to tackle the coronavirus crisis. Though this proposal has yet to be debated in Congress, it has already been fiercely attacked by newspaper editorials, the business sector and even President Abdo Benítez, who said that it was not the time to “make things more difficult for those that are already putting a big effort in.”

Luis Rojas said that the arrival of the coronavirus pandemic only served to intensify the daily problems experienced by broad sectors of the Paraguayan population. He says that urgent action is needed now, not just to deal with the virus, but to set right long-standing injustices produced by the state’s lack of will and inability to properly implement basic services.

“The Paraguayan population was in a state of crisis even before all of this—an economic crisis, an employment crisis, with very low quality of life, poverty, and massive inequality. The current situation is making all that worse.” he said, “We need changes. The way out of this isn’t to go back to how we were before coronavirus.”

William Costa is a freelance journalist based in Asunción, Paraguay. He concentrates on human rights and politics.