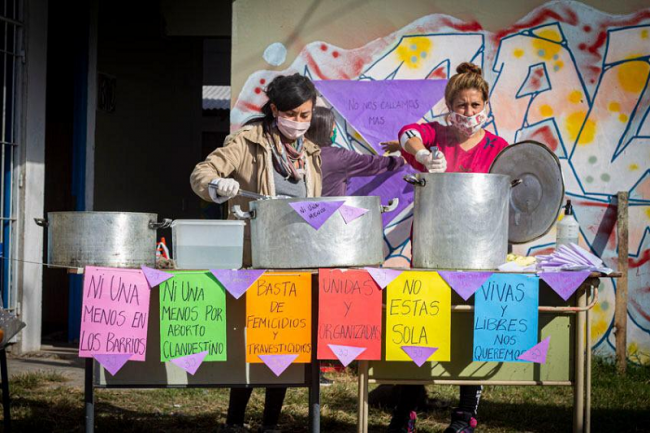 At the end of April, residents of Villa 31, one of Buenos Aires’ largest informal settlements, started reporting a loss of running water. A couple of weeks later, Ramona Medina, a resident of Villa 31, recorded and released a video from her bathroom denouncing the lack of running water. She focused her camera on a waterless faucet, asking Diego Santilli, the vice-chief of the Buenos Aires city government, “How, after eight days without running water, are we supposed to wash our hands, maintain hygiene, wear masks, or not leave our homes when every day I have to leave my home to go buy water?”

On May 13, Medina was hospitalized and placed on a ventilator to treat complications from Covid-19. Four days later, she passed away.

Medina was one of the millions of Buenos Aires residents living in crisis prior to the Covid-19 outbreak. A mother of two disabled children and a community activist with La Poderosa, a villa-led community organization and news outlet, Medina was part of a new national feminist movement that combats the effects of the pandemic and ongoing economic crisis. Originating as a youth program in the Villa Zavaleta of Buenos Aires, La Poderosa is now an autonomous, consensus-based, self-funded organization with 114 assemblies throughout Argentina, and 12 assemblies throughout Latin America. Eva Zulema Mango, a member of La Poderosa in the city of Tandil, described Medina’s dedication to her community: “Ramona was a feminista villera (a villa feminist). As feministas villeras we have been, and will always be, at the frontlines of any crisis demanding our rights, creating the ollas populares (informal soup kitchens), and making sure that everyone is fed.”

Argentina’s early implementation of a national lockdown has received international attention for its humanitarian impact in preventing the spread of the Covid-19 virus. As of June 11, there were fewer than 800 registered deaths, compared with Chile’s 2,475 and Brazil’s 39,803. First-term president Alberto Fernández defended the strict national lockdown on the grounds that he favors human lives over the economy.

When the virus arrived in Argentina in mid-March, most of those infected were residents of Buenos Aires’ wealthy neighborhoods who had contracted the virus while traveling abroad. Today, the infection rates are increasing more acutely in in the capital city’s villas and the surrounding urban periphery of the Buenos Aires province. Known as the Conurbano locally, this expansive urban periphery is home to 11 million residents, or 25 percent of Argentina’s overall population.

The pandemic arrived in Argentina only four months into Fernandez’s first term, and in the midst of a deep economic crisis that was solidified under the previous conservative administration of Mauricio Macri. At the end of 2019, 35 percent of Argentina’s population was estimated to be living in poverty, with 39 percent in the Conurbano. The national lockdown has exacerbated poverty and social suffering at the urban margins, especially for women. Sandra Hoyos, founder of the Asamblea Feminista Conurbano Noreste (The Feminist Assembly of the Northeast Conurbano) described the situation: “We have seen the ways in which the pandemic has magnified the existing social inequalities. Most people in the Conurbano work informally, which has meant a total loss of income during the lockdown. For women, this means working harder for little to no money and spending more time at home, which can be an incredibly dangerous place.”

According to the Buenos Aires gender-based violence observatory Ahora que si nos ven (Now that you see us), there were a total of 55 femicides nationwide between March 24 and May 2020 in Buenos Aires, with 70 percent of the murders committed in the victims’ homes. Calls to the national domestic violence hotline, Linea 144, have increased by 40 percent during the lockdown.

Despite the lockdown’s movement restrictions and the accompanying economic disaster, feminist activists like Ramona Medina have risked their lives to ensure that their communities are fed and have access to clean water. Laura Marquez, a teacher and feminist activist with the class-conscious feminist group Las Defensorias de Genero (Gender Defenders), organized ollas populares in the Villa Urbana neighborhood in the Conurbano city of Lomas de Zamora.

“With so many students’ families unable to work in the informal economy, children were going hungry. So we started the olla several times a week to make sure that everyone is fed,” Marquez explained. “But the olla is much more than an act of solidarity—the olla is a space for political transformation.”

The women-led activism that has emerged under the lockdown is rooted in the popular movements of the late 1990s and early 2000s. Women from the urban margins comprised of the majority of the Piquetera/o movement of unoccupied workers. Throughout the late 90s and into the 2000s, Piqueteras participated in and led occupations of major highways, setting up massive ollas populares, and oftentimes feeding thousands of people.

Today, especially under the lockdown, the women-organized ollas continue to sustain communities and popular movements. The difference is that, in the words of the The Asamblea Feminista Conurbana Noreste, “We have painted the ollas violet”: the color of the feminist movement. In times of extreme social isolation and suffering, the ollas serve as a life-giving space, created by and for women to feed their families and to share strategies for survival. At a recent olla popular organized by the National Campaign for the Legalization of Abortion of the North East Conurbano, activists distributed food and information on reproductive care during the pandemic, with handwritten posters reading “OUR RIGHTS ARE NOT UNDER LOCKDOWN” and “JUSTICE FOR RAMONA.” 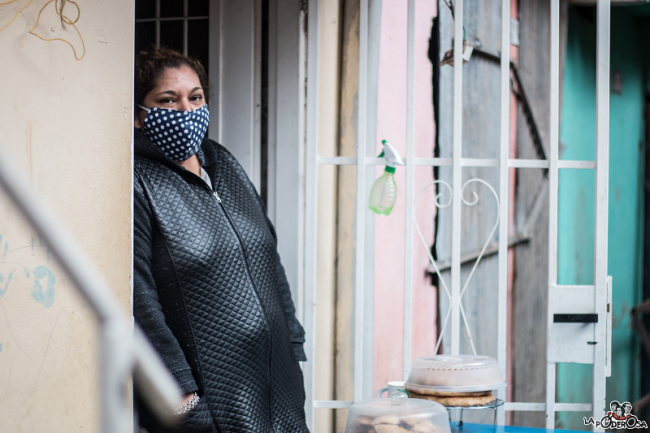 Since the #NiUnaMenos (Not One Woman Less) movement against femicide emerged five years ago in Buenos Aires, diverse feminist movements grounded in class, racial, and geographic consciousness have blossomed throughout Argentina. “Our feminism is territorial,” explained Hoyos. “It considers the lived realities of the women, lesbians, travesti, and trans people who live in the Conurbano. When feminists in Buenos Aires make demands, they are generalized— they do not necessarily reflect our realities. Feminismo territorial prioritizes the needs that we have in our communities such as hunger and a lack of health centers.”

It is this intimate knowledge of the lives and struggles of those living in the Conurbano that has prepared feminist activists to fight a crisis like the COVID-19 pandemic. “In reality, we have always been feminists,” explains Zulema Mango of La Poderosa. “We just did not see ourselves as such. We thought that feminists were just the women at the marches with their tops off, but after a lot of reflection and discussion, we have claimed feminismo villera as our own identity. Our feminism is what pushes us. It is our motor. It sustains our solidarity and sisterhood from villa to villa.”

When Ramona Medina died several weeks ago, hundreds of “Ramonas” living in villas projected her image onto buildings around their communities, with a caption reading “We are Ramona.” A tribute titled “The Ramonas,” written by La Poderosa activists in the city of La Plata, reads: “Because we believe that a better world is being made possible through our work, we will continue to struggle together. We do not want to be the first to get sick. But it happens, and it will continue to happen, because we are at the frontlines of each battle that we will continue to fight every day.”

Claire Branigan is a PhD candidate in cultural anthropology at the University of Illinois at Urbana-Champaign. Her dissertation explores the politics of femicide in Argentina.