Another IMF Bailout in Argentina (Part 1)

Argentina is experiencing another recession, this time under right-wing president Mauricio Macri, who has once again turned to the International Monetary Fund (IMF) for help. Will this time be different? 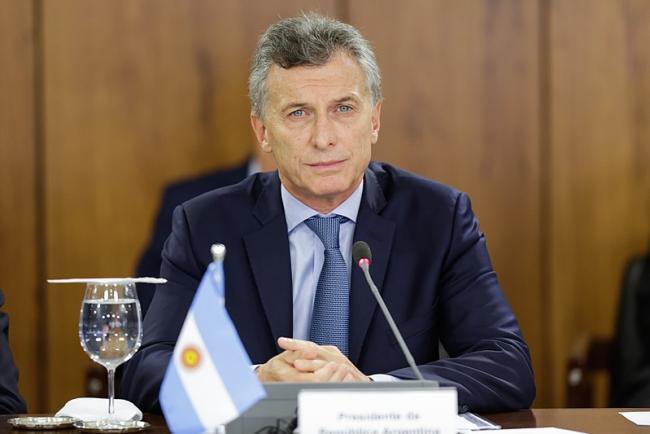 Editors’ Note: This week we’re running a mini-series on Argentina’s current financial crisis. With an election coming up, it’s an important moment to reflect on the failures of President Mauricio Macri’s promises to restore the country’s economy. Part 1 covers the specifics of Argentina’s macroeconomic policies and why a renewed alliance with the IMF will only exacerbate austerity policies at the expense of the working class. Part 2 covers President Macri’s stunted efforts to bring fracking to Argentina. Will Argentina continue down this path, or will the people seek out an alternative? Here’s Part 1:

Three and a half years after Mauricio Macri came to power in Argentina in December 2015 on the promise of fixing the country’s economy, it has instead fallen into a deep recession. In response, the government has turned to the International Monetary Fund (IMF) for help, with memories of the last IMF bailout still fresh in the minds of Argentinians.

Today, what little credit existed in Macri’s early days has dried up, and sky-high interest rates are encouraging financial speculation over productive investment. Unemployment and poverty rates have risen sharply, as have the number of people with basic needs unmet. Plunging economic activity has negatively affected fiscal revenue, so meeting the zero-deficit target requires new spending cuts. To top it all off, inflation has risen, reaching almost 50 percent in 2018. Economic growth and development are terms that have been virtually erased from official public discourse and policy objectives.

This panorama lies in stark contrast to Macri’s campaign promises, which included reducing inflation to a single digit and a “downpour of investments” that would arrive from abroad when investors saw how business-friendly the new government was. This in turn would lead to greater stability, economic growth, and more jobs, and all would be well again, he claimed.

Macri’s election followed 12 years of center-left rule under Peronists Néstor Kirchner (2003–2007) and Cristina Fernández de Kirchner, often known as CFK (2007–2015.) In the first years under the Kirchners, Argentina’s economy had improved steadily. The first two Kirchner administrations were marked by a strong economic recovery from the 1998–2002 recession and massive 2001–2002 crisis, with high rates of economic growth, sharp reductions in poverty and unemployment, and a substantial upturn in real wages and consumption. This resulted from a heterodox economic policy framework aimed at developing the domestic market using expansionary monetary and fiscal policy, and a managed exchange rate that favored domestic consumption and production.

Yet during CFK’s second term, however, problems began to crop up. First, international commodity prices began to decline, increasing pressure on Argentina’s foreign sector accounts. In response, CFK implemented exchange controls, or government-imposed limits on foreign currency operations, which led to the development of a black-market exchange rate where Argentines traded pesos with dollars and other currencies as the value of their money depreciated. Second, inconsistencies in the management of monetary and exchange rate policies resulted in inflation and appreciated exchange rates. Third, New York Judge Griesa’s 2012 ruling in favor of hold-out vulture funds suing Argentina temporarily interrupted debt service payments and access to foreign capital markets, prompting fears of a government default. The government struggled to respond to challenges requiring policy adjustments until it was too late. Furthermore, sectors of the electorate became discontented with exchange controls and inflation, decisively influencing the outcome of the 2015 presidential election.

Big business, and especially finance, were optimistic in the face of Macri’s electoral victory. Bloomberg welcomed Macri with a revealing headline: “Wall Street Is in Charge in Argentina (Again).” They were right. From his first day in office, Macri implemented typical neoliberal trade and finance liberalization policies―removing most barriers to the free movement of goods and services and, more importantly, finance, including eliminating exchange controls. The government’s hope was that by “neoliberalizing” the economy, foreign investment would flow in and thus correct external imbalances. For a country experiencing a shortage of foreign exchange, this move risked making external imbalances worse. The result of these policies was to flood the local market with imported goods, killing local jobs and businesses and worsening the trade balance, while foreign investments never materialized.

For the first two years, the Macri administration issued massive amounts of public debt to service the country’s external deficit, most of it denominated in foreign currency. However, by February 2018, foreign capital markets had largely stopped bankrolling Argentina, setting off a run on the peso, resulting in devaluation and a surge in inflation. The lack of access to foreign credit meant that Argentina was headed for another default, or a forced debt restructuring at best.

At that point, Argentine authorities turned to the IMF in desperation. It wasn’t the first time: Argentina turned to the IMF in 2000 when, after three years of recession, it was unable to service its massive debt. The IMF conditioned its loans on fiscal spending cuts, accelerating Argentina’s economic downturn and making the massive December 2001 crisis that followed inevitable.

Not much has changed at the IMF in the 18 years since Argentina’s last experience. In mid-June 2018, Argentina had signed a three-year stand-by agreement for $50 billion, the largest loan in the IMF’s history. With a seriously flawed diagnostic of Argentina’s problems as a point of departure, the conditions attached to the loan were vintage IMF: fiscal austerity with a zero fiscal deficit target excluding debt service payments; a renewed commitment to an inflation-targeting monetary policy; a floating exchange rate regime; and ending central bank financing of the treasury, among others.

However, by mid-August 2018, after another run on the peso consumed most of the IMF’s first disbursement of $15 billion, Argentina’s authorities once again turned to the IMF to request a larger loan. By the end of September, the IMF had approved a $6.3 billion extension to the original loan, with new conditions attached and, more importantly, a substantially accelerated disbursement schedule: 90 percent of the loan would be disbursed before December 2019. With presidential elections in October 2019, many interpreted this move as a clear show of IMF support for Macri’s reelection.

Among the new conditions was a 180-degree change in monetary and exchange rate policies. The obvious failure of targeting inflation through a freely-floating exchange rate framework led the IMF to implement a zero-growth target for the monetary base—or no inflation, a very recessionary tool. The Argentine Central Bank increased its nominal interest rate to more than 70 percent in order to withdraw pesos from circulation and meet the target.  It also implemented a floating exchange rate, limited to an inflation-adjusted range. If the exchange rate moves outside of that range, the Central Bank is allowed to intervene in the foreign exchange market. All of this implies that IMF lenders see exchange rate stability as key to lowering inflation in Argentina.

What have been the results of Argentina’s new engagement with the IMF? In the foreword to the April 2019 World Economic Outlook report, the IMF noted that macroeconomic instability in Argentina (and Turkey) and numerous other factors, “have all contributed to a significantly weakened global expansion, especially in the second half of 2018.” Since consumption, investment, and economic activity dropped significantly and inflation almost doubled since the agreement was signed, the IMF is implicitly acknowledging that its policy recommendations in Argentina have failed and are contributing to the slowdown in global economic growth.

While the first stand-by agreement enabled Argentina to avoid a default and foreign creditors to get paid, the second agreement incentivized capital flight by providing additional dollars to short-term speculators, not unlike the capital flight that led up to the 2001–2002 crisis. In other words, Argentina is again at the edge of the abyss, facing a potentially explosive economic and social situation just ahead of presidential elections in October.

Will Argentina end up going over the edge, or turn around and find its way back to growth and development? The answer depends in part on the outcome of the upcoming elections, where there will likely be two clear alternatives.

The first is either Macri or another candidate from within his political party. Macri’s support and approval ratings have plunged since mid-2018. As a result, many are suggesting that María Eugenia Vidal, governor of the province of Buenos Aires, should run in his place. Regardless of who the candidate is, the policy program is clear. In a recent interview, when asked what his economic program would be if reelected, Macri said he would continue with the same policies but at a faster rate. One can expect greater austerity, a reprivatization of the social security system, labor flexibilization (i.e., further erosion of workers’ rights), and deeper cuts in public sector wages and employment. In other words, an acceleration of the downward spiral already in place, with a major crisis as a likely outcome. This would be the “over the edge” option.

The alternative is a candidacy centered around former president CFK, who announced on May 18 that she would run for the primary elections of the Peronist party as a vice presidential candidate to her former chief of staff, Alberto Fernández. CFK remains the opposition politician with the most support, but while her approval rating has increased in recent months, she still faces a considerable portion of the electorate who do not want her back in office. While the Fernández team has not spelled out an economic plan in detail, they have spoken of the need to reactivate economic growth, job creation, and consumption, and to control inflation through a “social pact of citizen responsibility.” Should they or a similar candidate win, they will almost certainly have to negotiate a private debt restructuring. But perhaps the most difficult negotiation will be with the IMF, since almost the entire loan as it stands must be paid off by the end of 2023. This will most certainly be the trickiest aspect of an opposition victory, given how inflexible the IMF has proven to be in these kinds of negotiations. As IMF Managing Director Christine Lagarde recently stated: “it would be foolish on the part of any candidate [in the Argentine elections] to turn their back to the work that is underway.”

But hopefully, Argentina will do just that: leave IMF austerity and neoliberalism behind and, more importantly, learn the lesson, once and for all, that neoliberalism and the IMF are antithetical to development.

Alan Ciblis is an Argentine economist and Chair of the Political Economy department at the Universidad Nacional de General Sarmiento in Buenos Aires, Argentina.