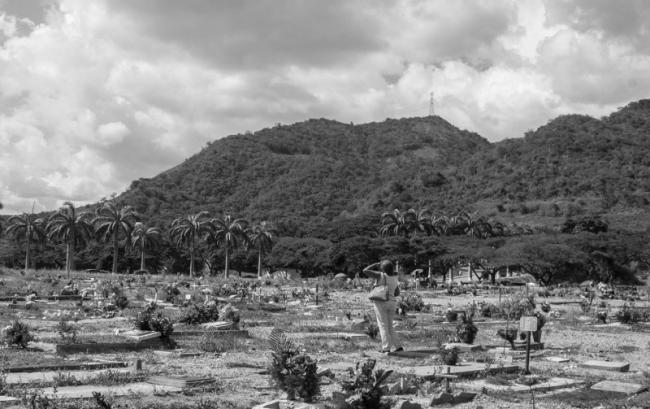 Professor Keymer Ávila is a researcher at the Institute of Criminal Sciences at the Central University of Venezuela and a professor of Criminology at the same university. He is one of the foremost scholars and critics of institutional violence and criminal justice policies in Venezuela. In this excerpt of a longer interview, originally published on July 6 and 7 at No Borders News, Venezuelan Workers Solidarity members Elvira Blanco and Alejandro Quryat asked him about the nexus between racism and state violence in the Latin American country.

Elvira Blanco and Alejandro Quryat: In the present, under Nicolás Maduro’s regime, how do police or security forces interact with groups racialized or oppressed by racism? How do these forces respond when these groups organize for their rights?

Keymer Ávila: When we denounce that in Venezuela police forces have been carrying out a drop-by-drop massacre against young people in popular sectors, we are referring to racialized and poor youth. Here, the criminal justice system is as racist and as classist as in other countries in the region. The main difference could lie in its high levels of deadly force.

In the specific case of Venezuela, the security forces have been marked from their origins by their militarization, their instrumentalization by political parties, and their excesses against the popular classes. The military logic that imposed itself in the confrontation with the [Leftist] armed struggle of the 1960s and 1970s, with thousands of cases of violations of human rights, was displaced in the following years to the daily practices of security forces. Cases like the “Pits of Death,” the massacre of El Amparo, or the repression of the 1989 Caracazo rebellion would become emblematic of the last decades of the 20th century.

The 21st century in Venezuela came with promises of a radical change and a rupture with the past. However, what ensued was a continuity and a deepening of everything that was already profoundly wrong.

According to official data analyzed in our studies, between 2010 and 2018 over 23,688 people died at the hands of state security forces. Sixty-nine percent of these cases happened between 2016 and 2018. The rate of homicides by state agents multiplied by a factor of six between 2010 and 2018, reaching up to 16.6 per 100,000 inhabitants. This number is higher than the total rates of homicide in most other countries.

The share of these cases in relation to the total number of violent deaths also climbed in that same period, from 4 percent to 33 percent. This means that, presently, one out of three homicides that happen in the country is a consequence of the intervention of state security forces. This, in a country whose homicide rates of 50 per 100,000 might already be considered a slaughter. In 2018, 14 Venezuelan young people died every day on average at the hands of the police.

To get an idea of the dimensions of this problem, consider that in Brazil this class of homicides totals about 7 percent of the total number. In 2017, Venezuela suffered more deaths from public force interventions than its neighbor, whose population is 7 times greater: Brazil had 4,670 deaths, Venezuela 4,998.

In another striking contrast, human rights data analyst Patrick Ball estimates that between 8 and 10 percent of all homicides in the United States are a consequence of security forces’ interventions. In Venezuela, that percentage is three times higher.

These are some of the summaries that characterize the current government. Far from weakening it, these dynamics actually strengthen it, because it operates with a necropolitical logic. As material conditions of life deteriorate, life itself seems to also lose its value. In that process, the government exercises greater and more effective controls over the population; the more it is accused of being authoritarian and dictatorial, of generating terror, the viler it becomes. That is where its main political capital lies. Its legitimacy is not found in votes, or in the people’s will, but in the unlimited exercise of power and force. Fear is one of its main tools.

This exceptionality has only continued to extend itself under the pandemic, granting more power to those who already controlled the entire state apparatus. During the first two months of the quarantine—a period in which it was expected that, with the reduction of social mobility, urban violence would decrease as well—over 428 people died at the hands of state security forces. Ninety-nine of those were prisoners attempting escapes or protesting the precarious conditions of precinct jails or prison complexes. This amounts to 7 deaths per day; deaths that do not scandalize anyone. Over that same period, according to official numbers, Covid-19 had taken the lives of 10 people, meaning one death every six days. For Venezuelans, state security forces are 43 times more deadly than the pandemic ravaging the world.

It is important to mark a distinction on a topic that, due to class and race prejudices, is often manipulated in the media when approaching the topic of Venezuela. The numbers I just pointed out, of thousands of deaths, pertain to young people from popular sectors massacred under the excuse of “public safety.” We are not talking about political dissidents or about demonstrations, and it is important to highlight these differences. This does not mean that in Venezuela repression against demonstrations is not brutal. But lethal institutional violence is expressed in a more massive, systematic, permanent, and daily manner against young people in popular sectors.

State repression is always political. “Public safety” only serves as an excuse for it. This repression is socially distributed in a differentiated manner: in the impoverished barrios, it is unlimited and lethal, while in demonstrations, it depends on who is protesting. When the poor protest, repression is greater, as seen in the demonstrations of the last days of January 2019, which left over 50 dead in less than two weeks. By contrast, when the protesters are young people from the middle classes, or university students, institutional violence generally expresses itself in less deadly ways, through arbitrary detentions, torture, illegal massive raids, military judicial processing of detained civilians, etc.

EB and AQ: What consciousness is there in Venezuela about racism in the United States, the Black Lives Matter movement, and the ongoing rebellion? What meaning do discussions about these movement take in the Venezuelan political context?

KÁ: I’m thankful for this question, because it allows me to say several things that I think are important, and that I don’t see addressed in public discussions.

We see sectors that condemn police violence in the U.S. but legitimize and justify the slaughters that security forces carry out in Venezuela. These sectors are mirrored by those who justify police violence in the U.S. but vehemently condemn it in Venezuela. In the end, the fans of Trump and Maduro are quite similar on these topics as they both follow structurally authoritarian, repressive, and anti-democratic projects. They may define themselves as antagonistic, but they rather complement and legitimize each other, using one another’s excesses in their propaganda to cover up or justify their own crimes.

In Venezuela, for instance, the government uses the terrible case of George Floyd in its tirades and propaganda against the U.S. government, with the end of seducing some well-meaning dupes among international progressives. With this, they distract attention from the disaster that they have made in the country and the massacres that their own security bodies execute.

On the side of the more traditional opposition, Black Lives Matter will not be well received because, in the end, these are conservative, racist and classist sectors that agree with this type of excess against the excluded; they will only raise their voices when the victims are their own militants, middle-class youth in the context of a political demonstration, or when it is beneficial for their own media agenda. They care very little about the deaths of thousands of racialized and impoverished young people caused by police interventions.

I think that race consciousness is still in a state of gestation in Venezuela. The Left in our country is predominantly and primarily conservative and Eurocentric; it does not ask itself these questions because race does not fit well in its cheat sheet of “class struggle.” Moreover, much of [the Left] is in a process of self-destruction, having been co-opted by the government’s apparatuses, logics, and rhetoric—hence their oscillation between justifications, denying reality, and an abetting silence towards the state’s excesses and human rights violations. Only minority sectors, with little weight, remain active in struggle. Fortunately, the international left and progressive sectors are becoming increasingly aware of what is really happening in Venezuela, and little by little have been putting aside automatic solidarities towards its government.

Institutional violence and human rights violations must always be energetically condemned. There are no good violators of human rights, and their behaviors should not be justified in any way. This double standard to condemn some excesses and justify others does enormous harm to societies and states, and to politics itself.

Elvira Blanco Santini is a PhD student in Latin American and Iberian Cultures at Columbia University.

Alejandro Quryat is a Venezuelan socialist in NYC and earned a B.A. degree in Comparative Literature at Columbia University.