A New Latin America Foreign Policy Agenda for the Next Administration

Organizations are calling for the next administration to adopt a foreign policy toward Latin America based on non-intervention, non-interference, and mutual respect.

Over 100 organizations that work on issues related to Latin America and the Caribbean sent a letter to Democratic nominee Joe Biden and President Donald Trump calling for the next administration to adopt a new Good Neighbor Policy toward the region based on non-intervention, cooperation and mutual respect.

The organizations, including NACLA, call for ending stifling economic sanctions, ending U.S. arms sales and militarization of the region, ending political interference in elections and domestic affairs, supporting the human rights of all peoples, and implementing a humane immigration policy and fairer economic policies.

Read the full letter and see the full list of signatories here. For more on reimagining foreign policy toward Latin America, check out NACLA’s Spring 2020 issue of the NACLA Report, “A People’s Policy for the Americas.”

The pillars of the policy agenda, based non-intervention and non-interference, are:

The embargo against Cuba has been a 60-year disaster that has caused countless deaths, cost the Cuban economy billions of dollars, shut U.S. businesses out of an important market, and contributed to deep antipathy towards the U.S. throughout the region and much of the world. More recent sanctions regimes against Venezuela and Nicaragua are also causing widespread human suffering. Furthermore, U.S. sanctions violate the Charter of the Organization of American States, the United Nations Charter, and international human rights law. They target the civilian population and therefore would violate both the Hague and Geneva Conventions—to which the U.S. is a signatory—if they were committed during a war. We call on you to end unilateral U.S. sanctions imposed through past presidential orders and to work with Congress to repeal the Helms-Burton Act, which imposes unilateral economic sanctions against Cuba. The United States should resolve its policy differences through diplomacy, multilateralism and engagement. 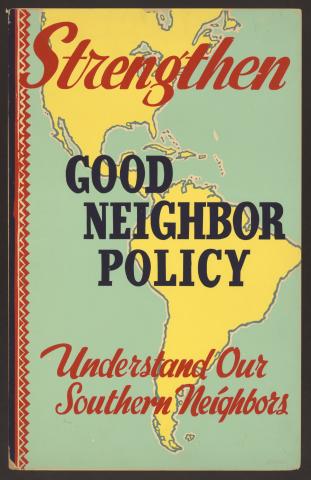 Though the Cold War ended decades ago, the U.S. continues to provide and export hundreds of millions of dollars of police and military equipment and training to Latin American and Caribbean countries each year. In many cases, such as Honduras and Colombia, U.S. funding and training have supported troops involved in corruption and egregious human rights abuses, including numerous extrajudicial killings and attacks targeting local activists and journalists. Much of this aid and weapons exports, which have accompanied the increased militarization of law enforcement, are transferred in the name of the decades-long war on drugs, which the vast majority of the U.S. public has long believed to be a failure. Rather than abating drug trafficking and violence, this approach incentivizes drug trafficking and fuels a vicious cycle of violence. Often U.S.-backed forces are themselves involved in drug trafficking and defend the interests of big landowners and corporations, while violently repressing land rights activists. There is no justification for U.S. security programs in the region. No national security threat exists and a “war on drugs” is a counterproductive way to deal with a U.S. public health issue that is best addressed through decriminalization and equitable legal regulation. It is time to scale down U.S. “security assistance” and arms sales and remove U.S. military and law enforcement personnel from the region.

The U.S. government has a long, troubling history of interfering in the internal politics of countries of the region. It has frequently carried out military invasions to impose or remove political leaders and it has supported right-wing military coups that have invariably resulted in violent repression. In the name of “democracy promotion,” the U.S. government has trained and funded political groups that it favors while supporting public relations campaigns to try to marginalize the political forces that it opposes. Time and time again, the U.S. has sought to shape the outcome of elections to favor its perceived interests. Here at home, we rightly condemn any sort of foreign interference in our own country’s domestic politics and elections, so how can we continue to engage in gross interference in the politics of our neighbors? It is time for the U.S. to respect the political sovereignty of the countries of Latin America and the Caribbean. Any major political crises that emerge in the region should be dealt with through multilateral engagements, not unilateral actions.

Supporting the human rights of all peoples

The U.S. has an important role to play in advocating for human rights across the hemisphere, a role that can only be strengthened by ensuring that the U.S. government does not violate human rights in its own territory, on its borders or overseas. Special attention should be paid at home and abroad to the rights of historically excluded communities, including indigenous and Afro-descendant communities, LGBTQ+ individuals, women, and migrants and refugees. The United States should speak out when human rights defenders, including environmental and land rights activists and labor organizers, are in danger—a situation all too frequent in Latin America and the Caribbean today. For the U.S. to credibly speak about rights, it should sign and ratify international treaties including, but not limited to, the Rome Statute of the International Criminal Court, the American Convention on Human Rights, and the International Covenant on Economic, Social and Cultural Rights, as well as other covenants relating to racial discrimination, women, children, persons with disabilities, migrants, and torture. Furthermore, the U.S. should work towards depoliticizing and strengthening existing multilateral institutions that defend human rights, and the U.S. must ensure that it does not instrumentalize rights for political gain – too often, human rights violations in the U.S. or in allied countries are ignored, while violations in countries considered adversaries are magnified.

The next administration must undo the brutal harms of the 2016-2020 Trump administration and must understand how past U.S. economic, security and environmental policies have fueled mass migration. It must also reject the status quo of the Obama administration, which deported more people than any administration ever before and built the infrastructure for the Trump administration to carry out violent anti-immigrant policies. These include an increase in border militarization, growth in the privatized immigration detention system, an increase in DHS information-sharing programs like Secure Communities, more ICE partnerships with local police, and an increase in ICE raids, among others. The next administration must hear the demands for immigrant justice, and implement the following measures: enact a day-one moratorium on all deportations; end mass prosecutions of individuals who cross the border; re-establish asylum procedures at the border; provide an immediate path to citizenship for the Dreamers and for Temporary Protected Status holders; terminate the Muslim Ban; rescind funding for the border wall; rescind the myriad abusive Trump administration’s regulatory changes that have denied basic rights to immigrants; rescind the “zero-tolerance” (family separation) policy and other policies that prioritize migration-related prosecutions; reallocate resources away from immigration enforcement agencies and towards community-based alternatives to detention programs; and end private immigration detention.

The U.S. government has engaged in a variety of economic interventions in the region in order to promote a neoliberal economic agenda that benefits transnational capital and local elites while generating greater inequality, environmental destruction and living conditions for ordinary citizens. The U.S. intervenes in domestic economic policymaking in countries in large part through its enormous influence within multilateral financial institutions like the International Monetary Fund, the World Bank and the Inter-American Bank. In order to obtain credit lines from these organizations, governments typically have to agree to austerity measures and other policies that lead to the downsizing of welfare states and a weakening of workers’ bargaining power. In addition, the trade agreements that Washington promotes in the region have invariably led to the deregulation of financial markets and the strengthening of foreign investor protections, which prioritize the “rights” of corporations over peoples’ rights. As such, the U.S. should end the undue power given to corporate interests to exploit other countries economically through investor-state dispute settlement (ISDS) provisions found in trade and investment agreements, which allow corporations to sue countries in supranational tribunal over public interest and environmental regulations that affect their expected profits. To help the region develop, the U.S. needs to allow countries to choose their own paths, instead of supporting external institutions that claim to support development while actually serving the interests of corporations and global finance. Further, it must be ensured that U.S. foreign assistance supports public health and education services by channeling funding primarily to NGOs that take on these services in coordination with local and state entities and priorities, as well as in consultation with local and affected communities.