U.S.-sponsored militarization and neoliberal policies will not lead to structural changes in Guatemala and instead preserve the status quo that forces many to migrate. 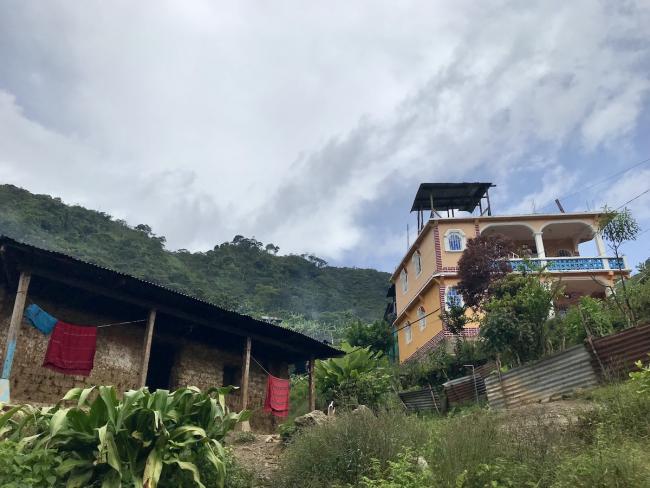 This piece was edited prior to the start of the GSOC, UAW Local 2110 strike.

I had just arrived to Ilom, Chajul in June 2019 when I heard the news that the Minister of Governance had signed an agreement with the Trump administration to make Guatemala a safe third country. I felt disoriented. Speaking with an elder from Ilom, he told me about the women and children who had migrated within the past year, others who were recently deported, and those that still planned to go.

It is a three-hour bus trip on a muddy and bumpy dirt road from the town center of Chajul to Ilom. A little past half-way, one sees the construction of the Xacbal Delta dam and the fully operational Hidro Xacbal hydroelectric plant. Both are located on the coffee finca (plantation) La Perla, the land of which was stolen from the Ixil-Maya over a century ago and today is owned by the Arenas Menes brothers. Their father, Luis Arenas, was known as the “Tigre del Ixcan” due to his brutality and the harsh treatment of workers. The dams were built by the Honduran Grupo Terra conglomerate, owned by Fredy Nasser, who supported the 2009 coup against Honduran President Manuel Zelaya. The dams will generate an estimated 155 MW combined and make millions of dollars in profits that will not benefit local communities. While these dams infringe on nearby communities, the energy is exported.

A resident of the La Perla finca states that there is no electricity where they live and that the finca owner requested that electricity only be made available to his home and administration office, but not to residents. Migrating to the United States is often an option to escape these harsh living and working conditions. Even then, remittances are not enough. Those whose families have lived on the finca for generations are not permitted to fix up their adobe or wooden houses. If anyone wants to put up a cinder block house, they risk getting kicked out of the finca. In other words, they are condemned to living in substandard housing conditions, or they have to leave.

The Ixils have historically resisted against invaders, from the Spanish to coffee finqueros to corporations building megaprojects. Each of these groups has displaced them in various ways. After the Jacobo Árbenz government passed a much-needed agrarian reform in 1952, the Ixils won an expropriation order against La Perla that would return 52 caballerías (approximately 5,720 acres) of their land. Luis Arenas, the finca owner, became upset and went to talk with U.S. Embassy officials and offered his Anti-Communist Unification party to lead a revolt and overthrow the government.

The United States organized its own coup against Árbenz in 1954, which overturned the expropriation order and plunged the country into civil war. President John F. Kennedy, through the Alliance for Progress, provided Central American governments with military aid that contributed to counterinsurgency, massacres, and disappearances throughout Latin America. The Ixil Region (consisting of Chajul, Cotzal, and Nebaj) suffered genocide carried out by the Guatemalan military forces, with the support of U.S. advisors and military aid. The United States knowingly condoned and contributed to genocide during the war against the Maya. While official data is lacking, the Maya make up a significant portion of the Central Americans migrants and asylum seekers arriving to the U.S.-Mexico border.

The newly inaugurated Biden administration has renewed discussion of U.S. foreign policy in Central America, which has been viewed by some as an opportunity to undo many of the Trump administration’s destructive policies. Yet the U.S. government, under both Democrats and Republicans, has historically worked in favor of the Guatemalan status quo, including the oligarchs, military, landowners, and neoliberal business interests, such as Hidro Xacbal and La Perla, that maintain a corrupt political system. While Guatemalan and U.S. government officials offer superficial solutions for migration, Indigenous communities, like those in Ilom, have struggled to confront the violent structures that have historically displaced them.

During the Obama administration, then-Vice President Biden was involved in creating the Alliance for Prosperity. This strategy was based on the three pillars of security, good governance, and international investment to deter migration. The Alliance for Prosperity has been an abject failure in curbing migration and has only contributed to further militarization of the region and human rights abuses.

Today, Biden wants to continue the Alliance for Prosperity through the $4 billion dollar aid package to Central America to combat the “root causes” of migration through security, international investment, and the rule of law.

Meanwhile, harsh U.S. immigration policies continue to dehumanize and criminalize migrant children and families at the U.S.-Mexico border. Biden has continued to pressure Mexico and Guatemala to repress Central American migrants and caravans, and on April 12, his administration reached an agreement to have these countries increase military presence at their borders. Despite promising to end family detention, Biden continues to imprison children and families in inhumane conditions. The United States also continues to support corrupt Central American presidents, such as Honduran President Juan Orlando Hernández, who has been implicated in narcotrafficking. Former Guatemalan President Jimmy Morales used military vehicles donated by the U.S. Department of Defense to intimidate human rights activists and personnel from the International Commission Against Impunity in Guatemala (CICIG).

During discussions of the root causes of migration, the U.S. government deliberately and strategically avoids discussing issues such as state-sponsored violence, the persecution of human rights defenders and activists, U.S. intervention, the negative effects of neoliberalism and megaprojects, and historical land inequality. The United States’ history of intervention and destabilization in Latin America and elsewhere, and its long-term effects, are well documented. Honduras, Bolivia, and Venezuela offer a few recent examples of U.S. backed coups and coup attempts. Biden continues to shamelessly finance the Honduran armed forces even after it was found that those involved in the planning and killing of Berta Cáceres were U.S.-trained Honduran military personnel. 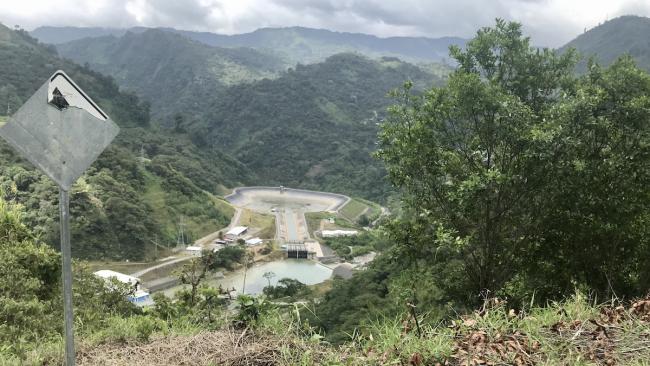 To tackle poverty the United States has promoted more international investment, neoliberal policies, and public-private partnerships, which translate to more destructive extractivist industries and sweatshops with harsh labor conditions. The United States supports “energy security” in the form of hydroelectric projects like Hidro Xacbal and Xacbal Delta as a form of economic growth. Yet foreign corporations have been implicated in corruption, persecuting land defenders, and human rights abuses. Most recently, Guatemala’s Specialize Prosecutor Against Impunity found that former Minister of Energy and Mines, Erick Archila, was the head of a criminal operation from 2012 to 2016 that received bribes from corporations including Hidro Xacbal, among others. The Guatemalan state continues to persecute land defenders who have become political prisoners, such as Bernardo Caal Xol, who was persecuted for resisting the Oxec hydroelectric plant owned by Florentino Pérez, the president of the Real Madrid soccer team.

The United States government is conscious of these local realities, and its public condemnation of corruption in Guatemala is a political performance to shadow its alliance with business interests, the oligarchs, and the private sector lobby CACIF (Coordinating Committee of Agricultural, Commercial, Industrial, and Financial Associations) who rule the country. While anti-corruption initiatives are important, the United States has demonstrated that it is not interested in dismantling the structural inequalities that exist in Guatemala.

Migration to the United States has created a continuous and historical cycle of debt, the loss of land, and the increase in the costs of buying land. Coyotes can charge between 95,000Q to 100,000Q (approximately $12,300-$13,000) to migrate to the United States. Many people looking to migrate are forced to use their land titles as collateral to take out bank or personal loans or loans from coyotes, all with varying monthly interest rates ranging from 7 to 11 percent. If a migrant does not make it to the United States after their allotted three tries or is deported, they lose their investment, and often their land, which they left as collateral for a loan. In these cases, many young people find themselves in an even worse economic situation than before their journey north.

Remittances have also led to a rise in land prices. An Ixil leader from Cotzal tells me that in her community, a cuerda (approximately 0.3 acre) of land cost Q2,000 (approximately $260) a few years ago. But after an increase in migration in the municipality in 2019, now the same amount of land is worth 15,000Q (approximately $1,950)—a 650 percent increase. Another leader states that campesinos who do not migrate are unable to purchase land and face precarious situations. The problem is not a lack of land, there is plenty of it; the problem is that it continues to remain in the hands of large landowners who manage it under capitalistic and extractivist logics.

For example, the finca San Francisco, located in Cotzal and Uspantán, measures 315 caballerías. On the finca, the Palo Viejo hydroelectric plant generates 84 MW of electricity and makes $30 to $40 million in profits. Despite only 37 percent of Cotzal having access to electricity, the plant’s electricity is exported, and less than $300,000 is left to the municipality annually. The inequality is staggering: according to the Food and Agriculture Organization, in Guatemala “about 70 percent of total land area [is] dedicated to agricultural and forestry activities,” with 1.86 percent of “farms owning 52 percent of arable land” and “45 percent of all holdings [being] smaller than 0.7 [hectares] in size.”

To best combat migration, the United States does not need harsh immigration laws that criminalize Indigenous peoples, migrants, and asylum seekers. Rather, there needs to be serious attention to local and community-led initiatives that seek to tackle the historical and structural inequalities in Guatemala that have caused centuries of territorial dispossession, particularly for Indigenous communities.

Indigenous peoples are engaged in active struggle and have continued to try to recover their stolen lands. Indigenous communities have won legal cases that recognize their rights to self-determination, governance structures, need for consultation, and land management. Yet these rights are often violated by the Guatemala state and military, which continue to persecute human rights and climate activists, journalists, environmentalists, and Indigenous leaders. U.S.-sponsored militarization and neoliberal policies will not bring about much needed structural changes in Guatemala. Instead, they work to preserve the status quo that forces many to migrate.

Ilom and the finca La Perla symbolize the neocolonial realities that exist in Guatemala, where foreign corporations, large landowners, military, business and U.S. interests, and the extraction and looting of natural resources take precedence over the well-being of Indigenous peoples and mother earth. Historical displacement and the lack of land has created conditions for people to migrate.

There is a sense of not being able to breathe and nowhere to grow, both agriculturally and for new families. Historical land inequality and dispossession, among other factors, remains a driving force of migration. When discussing climate change, hunger, and poverty as causes of migration, land redistribution, reform, and rights must be discussed as solutions. In supporting the further militarization and neoliberalization of Central America, the United States contributes to the long legacy of displacement.

Giovanni Batz holds a PhD in Social Anthropology from the University of Texas at Austin and is currently a 2020-2021 President’s Postdoctoral Fellow in the Department of Native American Studies at the University of California, Davis. His publications can be found at https://ucdavis.academia.edu/GioBatzGiovanniBatz