In the wake of the assassination of Haiti’s president, this NACLA reading list offers background on the country’s political situation and social movements’ demands. 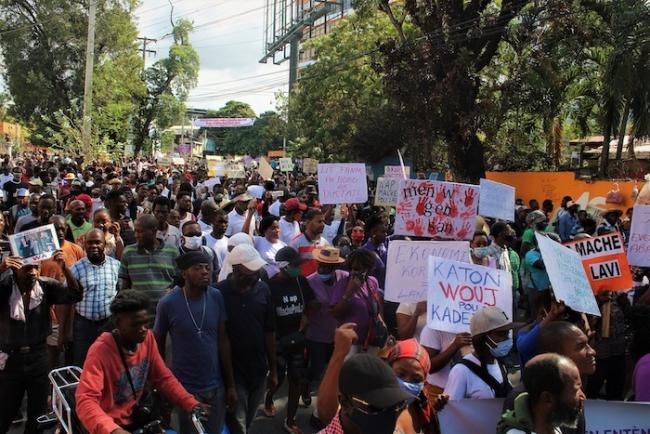 On July 7, unidentified gunmen killed Haitian President Jovenel Moïse in his home in a suburb outside Port-au-Prince. The assassination came amid intense violence and powerful social mobilization. The ongoing uprising began in mid-2018, sparked by unpopular fuel price hikes, but then a multibillion-dollar government corruption scandal and repeated power grabs spurred the movement. Tensions escalated when Moïse refused to leave office on February 7. Although legal experts and civil society groups broadly concur that his term ended in 2021, the president insisted he had a year left in his mandate. With parliamentary elections long postponed, Moïse had been ruling by decree since early 2020. Now, his killing now leaves a power vacuum.

Read NACLA’s recent coverage for more context on Haiti behind the headlines.

The Foreign Roots of Haiti’s “Constitutional Crisis”
Mark Schuller | February 6, 2021
Haiti’s president’s term has come to an end, but he refuses to step down. Solidarity is urgent. Read more.

Organizing Against the Immigration Cruelty Consensus
Ninaj Raoul | Spring 2021 NACLA Report
Migrant exoduses from Haiti illuminate how authoritarianism, globalization, and anti-Blackness shape mobility in the Americas and U.S. border policy, regardless of the government in power. Read more.

Fighting for Survival, Building for Power
James Beltis & Vélina Charlier | Spring 2021 NACLA Report
For members of nou pap Dòmi, a collective within Haiti’s petroChallengers movement, the anti-corruption struggle is a space to imagine the kind of society they seek to create. Read more.

Haiti at the Crossroads
Greg Beckett | March 6, 2019
In 2019, protests continued, fueled by the PetroCaribe corruption scandal. The mobilizations revealed a widespread crisis of faith in democracy and the neoliberal state. Read more.

Haiti’s Fraudulent Presidential Frontrunner Seizes Land for His Own Banana Republic
Joshua Steckley and Beverly Bell | January 16, 2016
Two years before his 2016 presidential campaign, Jovenel Moïse displaced hundreds of farmers to build an exporting banana plantation. It was an omen of things to come. Still, the so-called “Banana man” rose to power. Read more.