Using Cuba’s Protests as a Chance to Denounce the Left

Viewpoint: The recent protests in Cuba provoked a predictable slew of blanket denunciations of “the Left.” But we can’t understand what’s going on in Cuba without looking at the U.S. role. 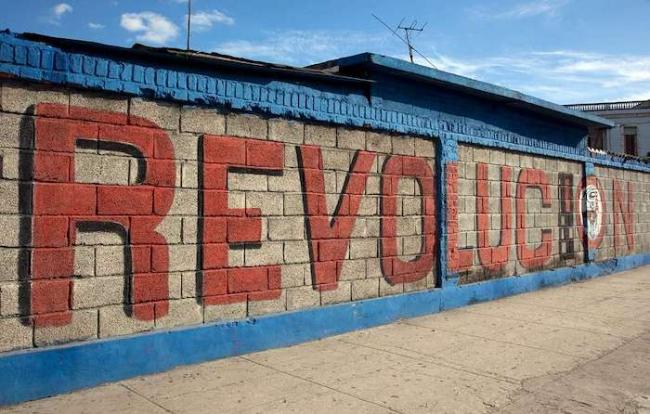 Covid-19 has brought economic and social crises to much of the world, and nowhere more than the Third World where poor infrastructure, poverty, resource export dependence, inequality, and lack of accountability are endemic. Protests against scarcity, structural violence, police brutality, and corruption erupted everywhere from the United States to Colombia, Haiti, Brazil, Guatemala, Ecuador, Chile, and Argentina, just to mention a few. Those in Latin America rarely merited notice in the U.S. news media—until they happened in Cuba.

In some ways the protests in Cuba were similar to those elsewhere in the region. But in some ways they were different. Cubans were protesting a government that the United States has officially declared an enemy and has been actively trying to overturn for over 60 years. And the United States has actively promoted anti-government activity in Cuba with words, money, and arms. It’s not surprising that President Biden, who had little to say about the dozens killed and hundreds injured by police during the protests in Colombia, other than to express his backing for Colombia’s right-wing President Iván Duque, gushed repeatedly about his support for Cuban protesters, with the obligatory denunciation of “Cuba’s authoritarian regime.”

Biden’s words were mirrored across the entire spectrum of mainstream U.S. voices, the few exceptions being academics who actually know something about Cuba like Louis Pérez and William Leogrande. Regarding Latin American revolutions, liberal politicians and pundits have fallen right in line with the far Right and Donald Trump, whose administration famously dubbed Nicaragua, Venezuela, and Cuba a “troika of tyranny” and vowed to “end the glamorization of socialism and communism.” The New York Times obediently chimed in with Trump at the time, denouncing Bernie Sanders for his visit to Nicaragua in 1985. But I was shocked to see NACLA now joining the chorus.

A Legacy of U.S. Subversion

After the July 26, 1959 revolutionary victory in Cuba, U.S. officials pondered how to respond. Could they control this revolution in the interests of U.S. corporations, as they managed to do in Bolivia in 1954? They worried especially about the larger impacts of a successful revolution. One State Department official wrote that “there are indications that if the Cuban revolution is successful, other countries in Latin America and perhaps elsewhere will use it as a model. We should decide if we wish to have the Cuban Revolution succeed” while another, a few months later, warned that “our attitude to date [could] be considered a sign of weakness and thus give encouragement to communist-nationalist elements elsewhere in Latin America who are trying to advance programs similar to those of Castro.”

They evinced much less concern for “the Cuban people” who, the U.S. ambassador at the time said “appeared united in idolizing” the revolutionary leader Fidel Castro. “This is one man rule with full approval of ‘masses’,” the ambassador concluded. Another, while committing the United States to establishing a “successor government” in Cuba, begrudgingly acknowledged “the impact that real honesty, especially at the working level, has made on the people” and “the fact that a great bulk of the Cubans…have awakened enthusiastically to the need for social and economic reform.”

One tool was the embargo. The goal, according to a State Department briefing paper, was to undermine Cuba’s economy, to “promote internal dissension; erode its internal political support...[and] seek to create conditions conducive to incipient rebellion.” The “only foreseeable means of alienating internal support,” the State Department offered, “is through disenchantment and disaffection based on economic dissatisfaction and hardship…Every possible means should be undertaken promptly to weaken the economic life of Cuba…[to deny] money and supplies to Cuba, to decrease monetary and real wages, to bring about hunger, desperation and overthrow of government.” While internal documents from recent administrations have not been declassified, the embargo continues to stand as a pillar of U.S. policy, and it has been repeatedly strengthened and tightened.

Another tool, what the Clinton Administration called “Track Two,” has been the cultivation and funding of potential opposition movements in Cuba. Even the notorious Helms-Burton, or “Cuban Liberty and Democratic Solidarity Act” of 1996, best known for its strengthening of the embargo, included plans to assist organizations that could form a potential “transition government” on the island. USAID continues to funnel millions every year to “democracy building” and “independent civil society organizations” on the island and convince them to oppose the Cuban government.

When Fidel Castro stepped down in 2008, the United States bemoaned the state of the Cuban opposition it was funding and supporting. “The traditional dissident movement is not likely to supplant the Cuban government…We will need to look elsewhere, including within the government itself, to spot the most likely successors to the Castro regime,” read a leaked 2009 diplomatic cable signed by U.S. Interests Section chief Jonathan Farrar. “We see little evidence that the mainline dissident organizations have much resonance among ordinary Cubans.” Instead, the cable looked hopefully towards “younger individuals, including bloggers, musicians, and performing and plastic artists” as potential leaders of an anti-government movement. “We believe we must try to expand our contacts within Cuban society…to facilitate and encourage the younger generations of Cubans seeking greater freedom and opportunity.”

Money continued to flow, much of it to unnamed NGOs and “civil society” organizations promoting these ends. Organizations claiming to support women, Afro-Cuban, and LGBTQI communities increased their prominence. Grant recipients like Development Alternatives, Inc. and Creative Associates International, Inc. sent staff covertly into Cuba to “search for networking opportunities.” In 2010 Creative reported: “Our program assisted in the formation and development of an initiative seeking to establish bonds of collaboration and identity among cultural and community leaders. The project was created by a core of cultural promoters with a vision for a more participative society. A large number of cultural figures were enlisted to support the project.” Yet Creative still struggled to “counter apathy and stimulate civic engagement.” Creative Associates projects included “Stirring Afro Cuban Communities into Action,” “Mapping Young Community Leaders,” and “Building Capacity for Peaceful Social Mobilization.”

On June 30, 2021, USAID published a new call for grant applicants, noting approvingly: “The past several months have served as a watershed moment for Cubans demanding greater democratic freedoms and respect for human rights. Artists and musicians have taken to the streets to protest government repression, producing anthems such as ‘Patria y Vida,’ which has not only brought greater global awareness to the plight of the Cuban people but also served as a rallying cry for change on the island.”

The objective of this round of grants was to “advance the effectiveness of independent civil society groups to advocate for greater human rights and freedoms.” The call noted that “many Cubans shy away from traditional forms of advocacy. Nonetheless, recent efforts by faith-based organizations, artists and other marginalized groups demonstrate the Cuban people’s burgeoning willingness to demand accountability, and greater respect for human rights. By incorporating a wider pool of groups as part of citizens’ demands, civil society can effectively expand its ranks, while also raising awareness of the Cuban government’s failings, which span both political and social rights. USAID seeks to support these groups in their demands for greater democratic rights and freedoms” (emphasis added).

In other words, the program urged Cubans to mobilize against the government, while also tacitly acknowledging that much of the population still lacked “awareness” of the government’s failings.

I do not believe that the Cubans who took to the streets on July 11 were simply responding to U.S. government manipulation or hoping to obtain funding. They were motivated by real grievances, and they have every right to demand a government response.

How Should the Left Respond?

A few weeks ago, NACLA reprinted an essay by Hilda Landrove from the Mexican journal Revista Común, entitled “With Cubans Speaking Out, How Will the Left Respond?” Landrove lauded the protests against what she called the “long-standing totalitarian Cuban government” and accused the international left of “voluntary blindness” in its support for Cuba. She even, remarkably, claimed that the news media failed to question the Left’s false vision of Cuba as a socialist paradise. Since she does not cite a single source for any of this, readers have no way of knowing which “leftists” or “news media” she is referring to. But supposedly these unnamed leftists continually inform her that “Cuban’s lack of freedoms is the price that they pay for their sovereignty.”

I know a lot of leftists, but I don’t know any who correspond to Landrove’s caricature. A more common, and principled, response from the Left supports Cubans’ right to protest while also opposing U.S. attempts to interfere in Cuba’s domestic affairs. We oppose U.S. attempts to provoke Cuban dissent by devastating the country’s economy with the embargo, and we oppose U.S. meddling that attempts to manipulate Cuban organizations into pushing for regime change.

While we oppose the Cuban government’s crackdown on the protesters, we also believe that the Cuban government’s paranoia that sees the malevolent hand of the United States in every challenge to its policies is not really that far-fetched. The best way to promote space for Cubans to debate, protest, and seek solutions to their country’s crisis is for the United States to acknowledge Cuban sovereignty, cease its covert activities, end the embargo, and allow the pandemic and humanitarian aid that Cubans desperately need to overcome the pandemic and economic emergency afflicting the island.

Aviva Chomsky is professor of History at Salem State University in Massachusetts. Her books include A History of the Cuban Revolution, The Cuba Reader: History, Culture, Politics, and most recently Central America’s Forgotten History: Revolution, Violence, and the Roots of Migration.