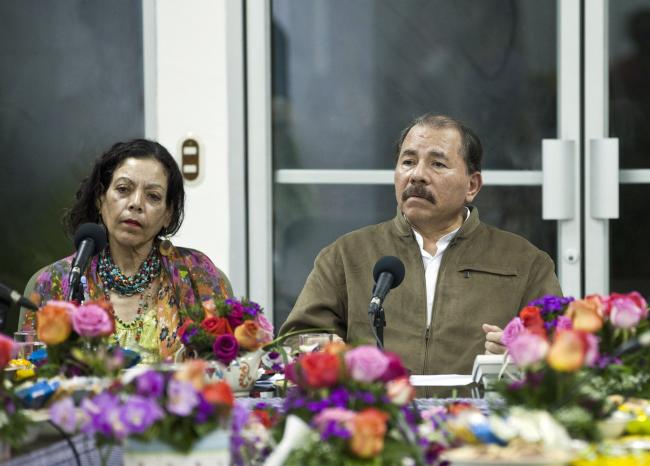 On August 23, in the foothills of the hill called Kiwakumbaih, meaning “devil’s rock,” in the Bosawás Biosphere Reserve—the largest reserve in Central America at 20,000 square kilometers—15 Indigenous Mískitu and Mayanga people were killed. Bercinia Celso, 41, and her daughter Katia Pérez, 14, were raped and forced to witness the vicious murder of their family members.

These victims were the result of the latest attacks that mestizo colonizers have been regularly carrying out to clear, seize, and convert reserve lands, stewarded by Indigenous peoples, into pastures. Leaders in the area have faced attacks and death threats. The military and the police, the only representatives of the Nicaraguan state in the region, kept quiet, as they have done for years, even though there is no mystery to solve. The terror aims to facilitate the dispossession and the colonizers’ advance in the service of beef and lumber export mafias.

Meanwhile, Daniel Ortega was in the midst of his electoral campaign, and his wife and vice president, Rosario Murillo, preached peace and “pretty living,” or vivir bonito, a slogan encompassing a 14-point behavior guide for “transforming our culture and daily life.” The blood and mourning didn’t reach their bunker. Some on the Left in Latin America debated whether or not to support Ortega. For some, neither the massacre nor the jailing of seven presidential primary candidates made a dent in their disciplined commitment. Within Nicaragua, a slogan circulated: “There’s no one to vote for.”

But nobody was certain whether there would be enough courage to carry out a passive rebellion of abstention, because the Sandinista National LIberation Front (FSLN) was moving its pieces and resources to get out the vote. Thousands of members of the Citizen Power Committees (CPC), which have been directly under Murillo’s control since they were created in 2007, were sent house to house before and during election day. They aimed to stimulate the vote by invitation and intimidation. Public employees were notified that they had to present proof of having voted. The availability of Covid-19 vaccinations—which in Managua had been concentrated in three hospitals, resulting in large crowds and much chaos—were decentralized and reached numerous health centers. Small fragments of rural roads were covered in a thin and ephemeral layer of asphalt. Two former presidents of El Salvador, Mauricio Funes and Salvador Sánchez Cerén, fugitives in Nicaragua, unveiled their newly granted citizenships and cast their votes of thanks with a social media display comparable to that of an influencer.

These and many more efforts were deployed to ensure the FSLN came out on top in a triple test measuring the muscle of the party’s militant base, its capacity to force public employees to vote, and its ability to convince undecided voters and capture the so-called “soft vote.” At a minimum, the FSLN hoped that polling stations wouldn’t appear as empty as they ended up being. Despite the ferrying of voters and the fact that public employees were required to send a photo of their ballots, abstention reached 81 percent, according to the monitoring group Urnas Abiertas.

The Supreme Electoral Council reported 65 percent participation and declared Ortega the winner with an unprecedented 76 percent. But Ortega was not “relentless in battle and generous in victory,” as the slogan went in the 1980s. He decreed dozens of detentions before, during, and after election day. He ordered dismissals and ostracism of students and public institutions that did not present their ink-stained thumb in their university to show they had voted. He increased immigration detentions, including of business people, journalists, and clergy. He closed and raided the Fundación Internacional para el Desafío Económico Global (FIDEG), whose director was minister of the economy during the Sandinista revolution. And he used his first post-election speech to call political prisoners lacking the most basic rights—visits, sufficient food, and legal protocols—"Yankee imperialist sons of bitches.”

All told, levels of intolerance escalated. This doesn’t look like the behavior of a winner. It looks like the behavior of someone who thinks: if so few people went to the ballot box, how many would go to the trenches? Passive rebellion worked in a context where marches, demonstrations, and piquets are explicitly prohibited and furiously persecuted. It sent the wrong message to Ortega’s world, where the specter of an insurrectional uprising is a constant and inspires every move.

A sector of the international Left continues to suffer from false consciousness. From within Nicaragua, it’s hard to understand the resistance to seeing that Ortega is not part of an emancipatory project, but rather of a phase of accumulation where national, regional, and global capital works shoulder to shoulder. In the four countries of northern Central America, it is possible to identify similar events and tendencies of authoritarian capitalism: displacement and land grabbing, the development of megaprojects at the expense of campesinos and Indigenous peoples, the killing and expulsion of journalists, the removal of independent officials, unconstitutional reelections consummated in Honduras and Nicaragua and proposed in El Salvador, the capture of judges and other state powers, foreign agent laws in the name of defending sovereignty that are a master resource of power in Nicaragua and El Salvador, and other strategies in the same vein. The most emblematic achievement of these mutual imitations is the elite techno-kleptocratic Central American Bank for Economic Integration, which hands itself disproportionate salaries and other gifts, according to Ottón Solís, former representative of Costa Rica in this institution.

In Central America, regional integration is the regional emulation of the perpetuation of power, intolerance, and the accumulation of capital. Its unifying force transcends borders and ideologies. With their own methods, each president of the countries of northern Central America has delivered blows to the rule of law: Jimmy Morales and Alejandro Giammatei’s dismantling of the International Commission Against Impunity in Guatemala (CICIG) and removal of the anti-corruption prosecutor; Juan Orlando Hernández’s military and paramilitary hitmen who assassinate environmental leaders for denouncing megaprojects; Nayib Bukele and Ortega’s capture of all state powers, one with great popularity and one in solitude.

Integration has other little-explored facets. There are the links between Orteguista capital and the Bukele and Hernández establishments, fundamentally embodied in the constitution of commercial enterprises and money laundering through people who serve double roles as front men and political operatives. Among others, these figures include FSLN treasurer and former vice president of the petroleum company Albanisa, Francisco López, in Nicaragua; the president of the Comisión del Valle de Sula Gerardo Arcángel Meraz in Honduras; and the former vice minister of foreign investment and former advisor to the board of the petroleum company Alba Petróleos in El Salvador, José Luis Merino, who in turn has used a network of front men.

Regional and global integration underpins the Ortega regime and nurtures it. The Guatemalan bourgeoisie supports Giammattei in their country and Ortega in Nicaragua. The business groups San José, Progreso, Leal, Campollo, Pantaleón, Desidero and its Agrícola Nicavista, Corporación Multi Inversiones, DISAGRO, MULTIGROUP, and Centrans Energy Services have multimillion-dollar investments in Nicaragua’s Monte Rosa and Magdalena sugar refineries, housing complexes, tourism in San Juan del Sur on the pacific coast, energy generation, rice and flour production, African oil palm plantations, ranching, cement, fertilizers, and other industries. Several of these companies have gained thousands of hectares under Ortega. Grupo Campoco alone acquired more than 70,000 hectares on the Caribbean coast in 2017. In addition to these stale companies, there are new and spurious arrivals. Alejandro Sinibaldi, a businessman and corrupt politician, laundered a fortune through various companies registered in Nicaragua: Inversiones Benelli, Inversiones Don Nico, Inversiones MJS, and Agropecuaria Piedra Santa. All these groups and investments are linked to Ortega via an intricate system of under-the-table commissions and co-investments. Crony capitalism has begotten a regional lumpenbourgeoisie that disgusts no political crede. Accumulation is the only compass and massive fortunes obtained in record time are the principal goal.

This is the vivir bonito that the tycoons hope Ortega will continue during this fourth consecutive presidential term. The same goes for the U.S. importers of beef and gold. According to official statistics on the export sector from Nicaragua’s Central Bank, between 2007 and 2020 the value of gold exports increased from $61.4 million to $665.1 million. And beef exports jumped from $179.5 million to $541.5 million. During this time, beef and gold became the two leading exports, displacing coffee’s traditional standing. The United States buys 45 percent of Nicaragua’s beef and 97 percent of its gold, according to 2021 data. The production of this gold continues to fuel destruction of the environment and campesino communities.

But it is beef production that is bloodiest, linked in part to the assassinations of Indigenous people in Bosawás. Displacement and accumulation have been the Ortega regime’s strongest tools to feed U.S. markets. Who calls for respect for sovereignty? El comandante? The Latin American Left? The United States?

José Luis Rocha is a Nicaraguan journalist, writer, and sociologist. He is a researcher with the El Salvador-based Universidad Centroamericana "José Simeón Cañas."