With mass protests rocking the country and the legitimacy of state powers in ruins, space for dialogue is closing. 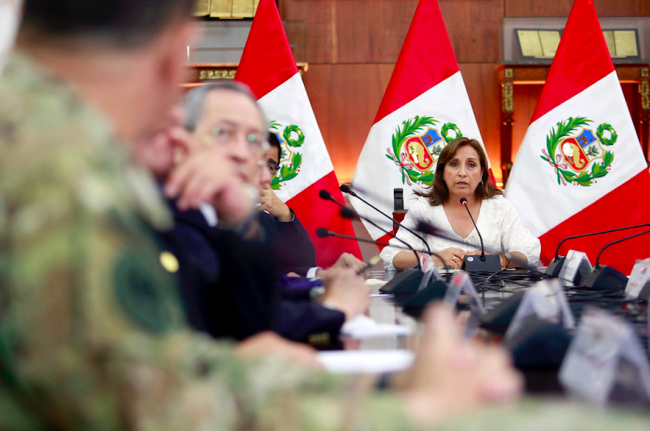 In Peru, 12 days of intense protests demanding new general elections, the closure of Congress, and the resignation of the president have met a heavy police and military crackdown at the hands of Dina Boluarte’s government. According to official statistics, 25 people have been killed and 76 hospitalized amid the protests, the majority of them youth from the poorest regions of the southern Andes.

Rights groups have documented various human rights violations at the hands of police, including the firing of live ammunition against civilians, the firing of tear gas canisters at people’s bodies, arbitrary detentions, undercover infiltration in protests, and the planting of incriminating evidence, among other examples.

The upheaval was sparked on the morning of December 7, when Peruvian President Pedro Castillo announced on national television that he had decided to “temporarily dissolve the Congress of the Republic and install an emergency government of exception,” by which he would govern by decree until a new congress was installed. He also announced the reorganization of the entire justice system: the judiciary, National Board of Justice, prosecutor’s office, and the Constitutional Court. The president had announced a self-coup.

What led President Castillo to make such a clumsy, unconstitutional, antidemocratic decision?

The day before the self-coup, President Castillo’s close associate, Salatiel Marrufo, disclosed to the prosecutor’s office a series of bribes that directly involved the head of state. Marrufo, former advisor to the housing minister, claimed that the president had received large sums of money through the Ministry of Housing. His statement also implicated a journalist, business woman, and several members of Congress. The president denied the allegations of corruption.

In response, the congressional Oversight Committee opted to receive the former advisor’s testimony on the morning of December 7. Marrufo reiterated the allegations, adding that he was ashamed to have participated in these acts of corruption.

That afternoon, Congress was scheduled to debate a third impeachment attempt against the president on the grounds of moral incapacity. All signs indicated that the move would not garner the 87 votes needed to impeach the president. Even if Marrufo’s final testimony could have swayed some members of Congress to change their minds, they still would not have reached the necessary threshold.

So what were the president’s options? Risk being impeached by an unpopular and discredited Congress and go down in history as just one more corrupt politician, or violate the constitution in a way that would turn him into a victim of the judicial, political, and parliamentary system?

Pedro Castillo, a rural teacher born in Cajamarca, became president by a margin of just 44,000 votes over his opponent, Keiko Fujimori. His victory was the result of diverse sectors strongly rejecting Fujimorismo, the ideology associated with Keiko’s father, convicted human rights criminal and embezzler Alberto Fujimori. Castillo also won because he knew how to channel the demands of the most disadvantaged, discriminated, and forgotten social sectors of the country: campesinos, farmers, Andean and Indigenous communities, teachers, and workers. 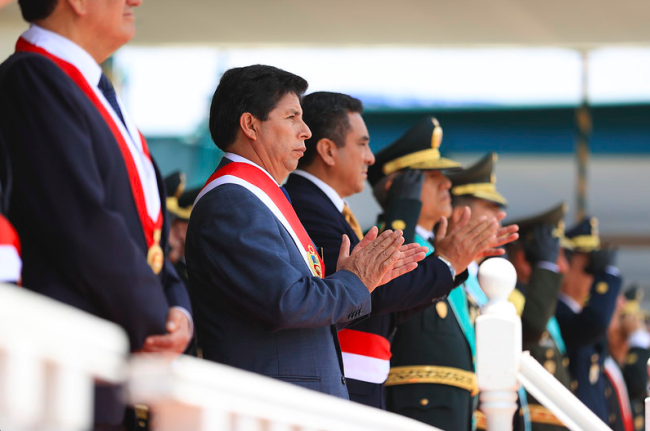 However, an assessment of his first year in office shows that his greatest accomplishments were maintaining a constant political crisis with Congress, having four corruption cases opened against him (now increased to seven), enabling friends and family acquaintances to take over public institutions, and covering up various private interests for people who acted as his advisors.

During his state of the nation address in July marking the end of his first year in office, Castillo expressed no self-criticism. In response, opposition members of Congress yelled “Corrupt, resign, get out!” preventing Castillo from finishing the final words of his speech. Neither of the two state powers seemed to realize that they would soon face a major problem: popular discontent.

The truth is, however, that in the face of an ongoing profound crisis and against the backdrop of Peru’s bicentennial independence celebrations, neither of the two powers have lived up to citizen's demands. Neither power has been capable of presenting viable solutions in the face of institutional, economic, social, and public health crises. And both have concentrated their efforts on tireless and futile attacks and defenses that, as always, have left the great divides in society unaddressed. This of course has come at a high price for democracy, opening new cracks

Dina Boluarte, a lawyer born in the Apurímac region in the Peruvian highlands, ran in the 2021 elections as Castillo’s vice president, a position she held from July 28, 2021 until December 7 of this year. During that time, she also served as Minister of Development and Social Inclusion until resigning in November 2022, when she declined to form part of a new cabinet headed by the new premier Betssy Chávez.

Boluarte remained in office despite constant changes of ministers and five cabinets. She had expressed her differences with then-premier Aníbal Torres and his uncontrollable statements. For example, after Torres accused a journalist of being “a bad mother, a bad wife, and a bad daughter,” Boluarte stated: "We cannot have expressions that violate women." She kept her distance from a government and a president whom she had offered to follow out of office if he was removed. 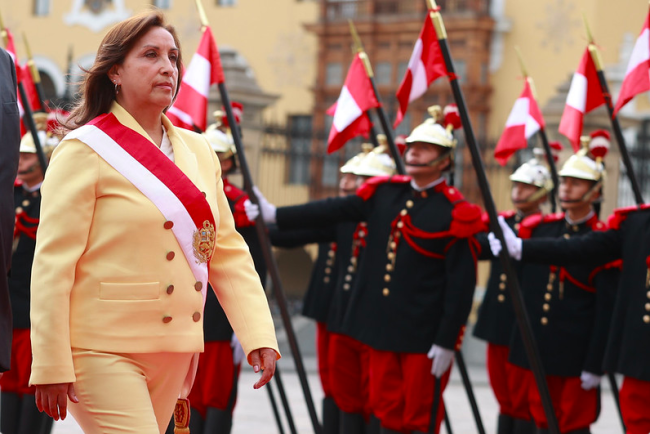 After Castillo's surprising self-coup, Boluarte took office as president in accordance with the constitutional line of succession, making her the first woman to assume the top office. Hours before her inauguration, she spoke out against Castillo’s breach against the constitutional order.

Once sworn in, the first thing Boluarte called for was a political truce with Congress and the installation of a unity government until July 2026. In doing so, Boluarte left behind her histrionic phrase: “If they remove President Castillo, I’ll go with him.”

The night of December 7, the condemnations of Boluarte began, calling for early elections and the closure of Congress. Now, more than a week after taking office, she faces massive social upheaval spread across the country’s main cities, with more than 13 roadways blocked, four airports occupied, at least 25 people dead, seven of them killed in just one day. Her government has declared a national state of emergency for 30 days, deploying the National Police to take control of internal order with the support of the Armed Forces. Her administration has proposed to move up the 2026 elections to 2024.

None of these measures, including the announcement of early elections, has managed to contain the protests in Apurímac, Cusco, Arequipa, La Libertad, Ica, Cajamarca, Ayacucho, Loreto, Tacna, Junín, Moquegua, and Lima. For 12 days, the population has continued to call for the closure of Congress, new general elections, and the creation of a constituent assembly. Some sectors also demand the release of former President Castillo, now held in the DIROES police prison, where former president and dictator Alberto Fujimori is also incarcerated.

Pedro Castillo’s government was a missed opportunity that could have laid the foundations for a way out of the current crisis—a systemic crisis of neoliberalism as a mode of governance and social order—and initiated substantial reforms in agriculture, education, health care, labor, and electoral politics. Yet despite an agricultural and food crisis, once in office, Castillo did not concern himself with the suffering of campesinos and farmers who have lost one harvest after another. He did not applaud the health workers who demanded better working conditions and salaries were again not applauded. He did not highlight the efforts of children who did the impossible to return to school.

In clear and simple terms, Castillo squandered Peru’s best opportunity to build a country that would allow us to recognize ourselves as Peruvians with equal conditions and rights, a community perspective that would allow us to isolate the old elites’ contempt for the Andean and Amazon worlds, forgotten in the depths of poverty and inequality. He ruled out the possibility for a second independence with a new social contract that would allow various leaders to prepare for a constitutional process.

It’s true that Castillo constantly faced the opposition of a Congress with an 86 percent disapproval rating. It’s true that parts of the media were responsible for ramping up hate speech that spewed racism, discrimination, and mockery with respect to his origins. It’s true that he faced various destabilizing sectors. But also true was his apparent desire to govern with the same rules as his predecessors: corruption.

The rightful demand for a new constitution, drafted by an elected constituent assembly and ratified in a popular referendum, would require congressional approval. But the main political forces have flatly refused this measure. It’s an impossible route in the current conditions. The left seeks to condition early elections on the creation of a constituent assembly, and the right rejects early elections if they come with other conditions. This is the best example of the inability to manage a crisis involving all parties.

So, we are facing a removal process, or several removal processes, in which direct dialogue with the government has been impossible, laying bare the lack of inclusion mechanisms for the social actors confronting the radical forces that seek to eliminate all that our institutions represent. These sectors are protesting against Congress, against the media, against the Prosecutor's Office—because they do not feel represented by them. They feel betrayed, and that frustration intersects with other demands accumulated over the years. They feel that their institutions do not serve them. The role of a democratic government is to identify the social composition of these protests and provide them with new mechanisms for inclusion and dialogue.

On December 16, the Boluarte government issued a curfew in 15 provinces in an attempt to quell the protests. In the days that followed, Congress began to debate a proposal, backed by Boluarte’s justice minister, to move up elections to 2024. In clear reference to the human and civil rights violations against protesters, the Ombuds's Office publicly called for security forces to cease the use of weapons and disproportionate force. Meanwhile, former President Castillo faces 18 months of pretrial detention.

How do we explain all this in a country where, supposedly, we live in democracy?

The crisis is escalating, and the slim windows for dialogue are closing. Now the call is “que se vayan pronto”—out with President Boluarte and the Congress.

Alejandra Dinegro Martínez is a sociologist at the Universidad Nacional Mayor de San Marcos (UNMSM), with a masters in social policy. She is a columnist and analyst with experience in public management and former National Youth Secretary.