Though Pedro Castillo’s victory initially seemed like a glimmer of hope, the reality of the past eight months has been disappointing. 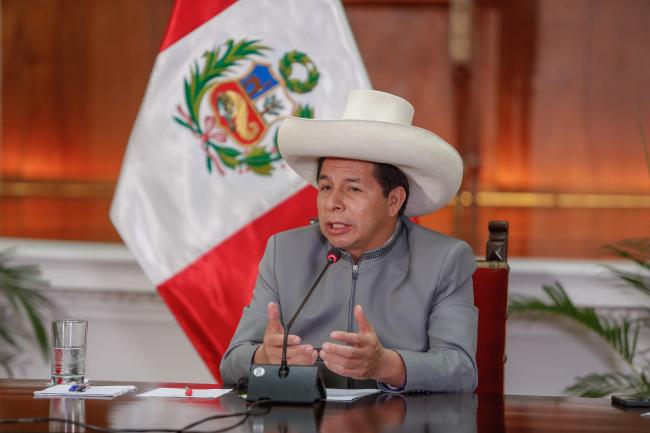 Eight months in, the administration of Pedro Castillo, whose victory in the 2021 elections was once a symbol of transformation and hope, is now closer to a nightmare. The dream of a government that could have laid the foundation for a process of structural transformation seems unattainable. This is a severe blow to the Left, just as it is for voters who share the current president’s background, habits, cultural practices, and common struggles.

As I have previously stated, the electoral process that led Keiko Fujimori, leader of the controversial Fujimorista party (Fuerza Popular), and Pedro Castillo, candidate for the controversial Perú Libre party, to the second round showed the urgent need to address the historic and longstanding demands of campesinos, farmers, teachers, workers, and Indigenous communities.

It also showed that, after all these months, a sector of the opposition with conservative, anti-democratic leanings, and a tendency to sympathize with fascist attitudes, has only been able to present Congress with two unsuccessful motions to remove the president. Moreover, in just four months of existence, the structure of the Investigative Commission for alleged electoral fraud has only resulted in the unnecessary and costly expense of 150,000 soles (a little more than $40,000). This has earned Congress a disapproval rating of 79 percent.

The opposition insists on removing the president as a means of political control with the intention of ignoring the formality of democratic elections, thus adopting a pro-coup stance rather than a non-conciliatory or proactive one.

There were initially concerns over Pedro Castillo’s first incomplete cabinet, which was led by Prime Minister Guido Bellido, a member of Congress affiliated with the ruling party. The Ministry of Economy and Finance and the Ministry of Justice were sworn in one day after the official ceremony. Prime Minister Bellido was mired in controversy related to homophobic, machista, and undemocratic remarks he had posted to his social media—in addition to his being a confidant of the General Secretary of Perú Libre, Vladimir Cerrón.

President Castillo stood among the main ministries (Economics and Finance, Health, Women, Foreign Relations, Agriculture, and Foreign Commerce) and representatives of his leftist political allies who joined him in support for the runoff election, mainly from the political groups Nuevo Perú and Juntos por el Perú. Implementing the Plan Bicentenario in the first 100 days of his administration was his message to the nation. More than a document, it was a sign of commitment that recognized the contributions of independent professional experts.

The plan attempts to address immediate issues threatening the country: health, education, work, and the economy. However, the first 100 days were marked by mistakes and weak reforms. The confrontational style of Prime Minister Bellido caused the dollar exchange rate to increase, depreciating the national currency, which the opposition took advantage of.

In early October 2021, the president requested the resignation of his prime minister, which provoked another political crisis, this time within the political party that brought him to the government palace. The leader of Perú Libre continues to focus on the ongoing persecution of those who he considers part of the “caviares” (elite) sector, thus reinforcing a pejorative that is also used by his detractors. Pure nonsense.

Also within the scope of government shortcomings, in the first 100 days Castillo has had to swap out nine ministers and reorganize his cabinet twice. The changes took place in the midst of a potential rupture between a sector strongly linked to the leader of Perú Libre. No public initiative can sustain itself with so many changes.

In terms of management and public policy, the main actions were: renegotiating the Camisea Gas contract; the “Yanapay” economic stimulus payment targeting 13 million people; increasing vaccination rates from 15 to 60 percent of the population; launching the Second Agrarian Reform; paying the social debt owed to teachers; revoking temporary layoffs that affected thousands of workers; creating a national program for women entrepreneurs; passing a law for orphaned children; and a new precautionary focus on addressing social conflicts with a multifaceted strategy.

As a result of the cabinet restructuring, Mirtha Vásquez became prime minister. A lawyer who is also from Cajamarca, Vásquez was known for her role as president of the Congress and a career in defense of environmental and peasant rights. Now seemingly more open to dialogue, the government appeared to take shape.

This new cabinet ended up with five women instead of just two. However, the Perú Libre bloc interpreted this change as a “betrayal” and expressed public opposition. Congress affirmed the cabinet with just 68 votes in favor and 19 protest votes from the Perú Libre bloc. Paradoxically, Perú Libre hasn’t had any problems voting with the same opposition blocs that ask for the President’s resignation on higher education reform, sexual and reproductive rights, and electoral reform.

On January 31, 2022, four months after her nomination, Prime Minister Vásquez presented her letter of resignation. Among her reasons, she singled out the impossibility of achieving consensus to benefit the country. She also underscored several potential acts of corruption committed by high level officials. The cabinet’s internal crisis worsened with the exit of Interior Minister and prosecutor Avelino Guillén, who requested a new director for Peru’s National Police. The president simply did not back him.

Government mismanagement worsened and the tools to confront them seem to be political privilege and a war declared on meritocracy and aptitude in public service. On April 2, a new chief of staff was sworn in, only to be forced to resign 72 hours later after it became public that he had been accused of domestic violence against his late wife and daughter.

Citizen mobilizations then began in response to unfulfilled campaign promises and appointments that did not represent demands for change. The president was being put on notice.

After that shameful appointment, a fourth prime minister was named: the then Minister of Justice Aníbal Torres, also from Cajamarca. The new cabinet was under a magnifying glass. Castillo backed off again in the presence of women appointees and the door was opened to ministers with close ties to the secretary general of Perú Libre, in addition to lacking qualifications. His political ally, Nuevo Perú, was left out.

This cabinet represented a recomposition of forces and political alliances that would make it possible to face any attempt to vacate or censor ministers. The government once again adopted a defensive attitude without carrying out the promised changes. Congress did not take long to censor the Minister of Health (linked to Perú Libre), a doctor seriously questioned for his professional capacity. Meanwhile, a new minister has yet to swear in.

Finally, cargo transport unions began an indefinite strike on March 28 in Junín, Arequipa, Cusco, Puno, Áncash, Piura, Apurímac, and Ayacucho mainly. Their main demands were dialogue with central government authorities regarding rising fuel prices, toll payments, and rising prices of staple foods. On the sixth day, the first regional protest broke out in Junín, putting pressure on the Pedro Castillo government. This time, it wasn’t just the transportation unions, but farmers who demanded subsidies in the face of rising fertilizer costs. Everyone demanded the president show up.

The transportation union has given the government five days to start fulfilling their demands. Five deaths and dozens of injuries have been reported. On April 7, the president participated in a remote session in Junín with his cabinet of ministers. As a consequence, a bill was announced to reduce and exempt taxes for fuels and certain foods, respectively. The salaries of the president and ministers were also reduced and the minimum wage was increased.

In the midst of firings and the replacement of qualified public officials with military officials and sympathizers, a new stage of crisis has arisen that could be an opportunity for President Castillo to push forward fundamental changes involving the civic sector—unlike previous governments that have led Peru to the current crisis. Will there be enough support now?

Alejandra Dinegro Martínez is a sociologist at the Universidad Nacional Mayor de San Marcos (UNMSM), with a masters in social policy. She is a columnist and analyst with experience in public management and former National Youth Secretary.