Transforming Chile from the Ground Up

Two Constitutional Convention representatives reflect on the process of drafting the world’s most progressive constitution. 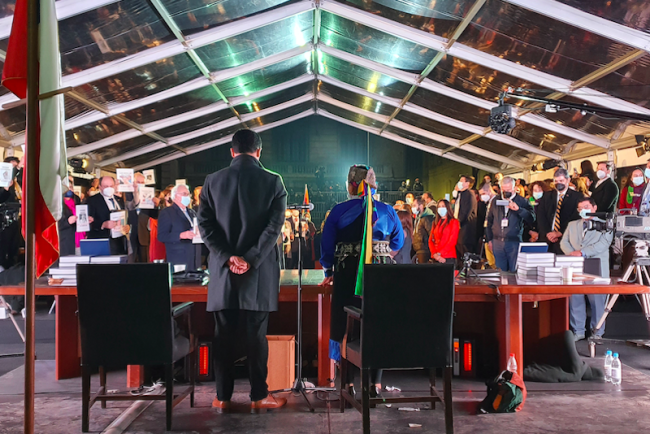 Over the last three years, Chileans rose up in an unprecedented rejection of 30 years of neoliberalism, voted overwhelmingly to scrap the dictatorship-era constitution, and elected a historic constituent assembly tasked with drafting a new charter. As they brought that process to a close, they voted down the proposed constitution on September 4. Elected in May 2021, the 155-seat Constitutional Convention set a new precedent for the inclusion of women and Indigenous peoples. With a significant number of independent delegates, it also laid bare popular discontent with the traditional political class. A year after beginning their work, the assembly presented their final draft on July 4, eliciting a flurry of commentary from experts, analysts, and pundits around the world.

Ahead of the September 4 plebiscite, I spoke with two representatives to capture in their own words the momentous formation of the constituent assembly. Elisa Loncon is a Mapuche linguist and Indigenous activist who was elected as the Constitutional Convention’s first president. Alondra Carrillo Vidal is a psychologist, feminist activist, and vocera (spokesperson) of the Coordinadora Feminista 8M, one of the organizations that has spearheaded Feminist General Strikes coinciding with International Women’s Day on March 8. Loncon’s historic leadership came to represent the political possibilities of plurinationalism for the Mapuche, the largest Indigenous group in Chile, and other socially marginalized Indigenous groups from the Aymara to the Rapa Nui. Carrillo participated in the formation of Movimientos Sociales Constituyentes (Social Movement Constitutionalists), a bloc within the Convention made up of representatives of multiple social movements.

In this interview, Loncon and Carrillo describe the significance of their work for their constituents and for their country as they sought to meet and mediate the possibilities of this historic process. Even though the national plebiscite rejected the draft constitution that they worked on, the rethinking of social rights and state organization articulated in the document’s 388 articles continues to inform public and political debate as Chileans negotiate the next phase of this process. This interview reflects not only what was possible but what is still possible, for the ideas produced in the 2022 draft constitution will not simply evaporate.

Romina Green Rioja: As movement representatives, what has been your experience in the Constitutional Convention?

Elisa Loncon: First, I must highlight the experience of being the first woman and Mapuche president of a constituent body. This resulted in great recognition of the Mapuche people on the part of Chileans and an unprecedented positioning of our historical demands within a democratic space.

Second, I must note that the convention stood out for being a democratic body that represented the various social sectors of Chile, in terms of gender parity, decentralization, and diversity of peoples, in a way we had never seen. All the political forces within the Convention were in the minority, and no one had veto power, which is why it became a space for dialogue and agreements between the different political groups, mostly independents from the left and center. Right-wing positions were always in the minority. And the pre-existing peoples or nations of Chile also participated in this dialogue for the first time.

As Indigenous peoples, we had the task of bringing into the new constitution the international agenda in terms of Indigenous rights. To enshrine rights, we carried out a cross-cutting political dialogue with various sectors working in support of human and social rights. The Right abstained and voted against the norms on the collective rights of the peoples.

Alondra Carrillo Vidal: The Coordinadora Feminista 8M, for which I am a spokesperson, held a long discussion process before deciding to run for the Convention. Once we decided to do it, and that we would do so through independent slates, our organizational trajectory intersected with the efforts of the territorial assemblies of electoral district 12, a district that I lived in until 2021. These assemblies, together with the Coordinadora and other territorial and social organizations in the district—such as the Movement for Water and the Territories (MAT), organizations of retirees fighting for decent pensions (No+AFP), and organizations representing youth and sexual and gender dissidents—put together a slate and decided that the candidates elected to the Convention had to be spokespersons of the organized territory. So that was my job. 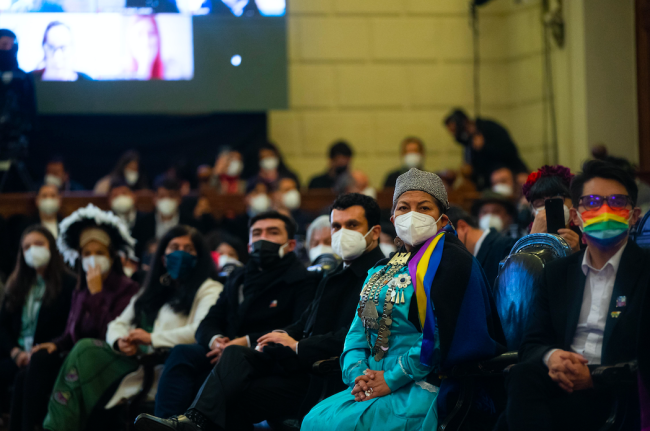 We had an agenda: the Feminist Program Against the Precariousness of Life. I was responsible for defending and promoting that agenda within the Convention. Beginning during the campaign and then once elected to the Convention, I linked up with others who came from similar programmatic spaces to form Movimientos Sociales Constituyentes. And, to ensure feminist norms were drafted together with feminists from the different groups, I was part of the push for the formation of the Feminist Collective, a politically diverse space.

At the same time, from my position as spokesperson of the Coordinadora, I maintained constant connection with feminist organizations that presented popular proposals for constitutional norms, a mechanism for meaningful participation. And I tried to build bridges to bring together the efforts of the feminists in the Convention and the organizations in the movement.

RGR: Can you describe a specific special or challenging moment during Convention?

EL: As president, it was my responsibility to confirm the two-thirds majority vote on all constitutional norms. This threshold was a legacy of the 1980 Constitution, which is why it was highly resisted by those on the left. There was pressure from the Left, the Communist Party, and representatives from social movements to change the vote threshold. But my position was to be faithful to the constitutional mandate. We could not go against the mandate because then we would be acting unconstitutionally. We had to ratify with a two-thirds majority, and that’s what happened. It would have been a serious mistake to have done otherwise.

We Indigenous peoples participated in the Convention as independents, and we did not have longstanding political teams. We had to find the best lawyers and Mapuche and Indigenous scholars among our people to communicate our demands to a group of people who did not know about Indigenous peoples. As Convention president I had a very small team of people with political experience, unlike the members of political parties that were previously part of different governments, who had political thinktanks. Of course, these were not conditions of equality. But it was possible to influence the democratic dialogue, due to Indigenous peoples’ strategy. The Mapuche people, for instance, put one representative in each of the Convention’s drafting commissions and provided them with collective support and follow up.

ACV: There were certainly many challenging moments, and the ones that come to mind are similar to the ones that Elisa mentioned. I will mention two. The first was when I suddenly became aware, together with my neighbors, that, given the composition of the Convention, the task of drafting the constitution was real. It was not just a matter of going to put ideas on the table or present aspects of our agenda, but rather about being direct participants in drafting the constitution. I know it may sound a bit strange, but I think that as popular organizations we always imagined a deepening of the revolt’s spirit of tearing down the old, and we were not necessarily so clear about the leading role we would have to play in the Convention and its role in building the new.

A second challenging moment, perhaps more personally but also collectively, was when we broke into thematic commissions to write the text. As Movimientos Sociales Constituyentes members, we decided to distribute ourselves throughout all the commissions, and my task was to participate, together with Alejandra Flores, in the Political System Commission. For this commission, the social movement did not have a defined mandate. We had to build a democratic process to construct that mandate collectively. Imagining and organizing such a process, and building pedagogical texts to deliberate with residents on issues as far removed from everyday life as the political system, was undoubtedly a huge challenge.

RGR: Has the Convention changed and/or expanded the politics of the feminist and Mapuche movements?

EL: Yes. The Convention served to broaden Mapuche and Indigenous politics as well as the perspective of the political parties and leaders who were challenged by the peoples in terms of recognition of the rights of plurinationality and the collective rights of Indigenous peoples.

There were agreements with feminists, social movements, and parties to support the norms about Indigenous peoples. The Indigenous movement also faced the challenge of breaking with colonial traditions imposed on the Indigenous world and especially on women. A special case was recognizing the reproductive rights of Indigenous women as a non-patriarchalized form of traditional knowledge, and we voted to approve the norm referring to women’s right to sexual and reproductive health.

Coexisting with non-Indigenous women also allowed us to see that there are different feminist political positions, some of which are very conservative and indifferent to Indigenous women’s demands for collective rights. And, even with gender parity, not all women are feminists; right-wing women are so conservative that far from seeking social change, they hinder it.

Read the rest of this interview, available open access for a limited time.

Romina Green Rioja is Assistant Professor of Latin American history at Washington and Lee University. She is currently finalizing her book manuscript To Govern is to Educate: Modeling Racial Education in Modern Chile (1879-1920).