When political tensions run high and misinformation proliferates, there’s no better way to get a clear view than with your own eyes. 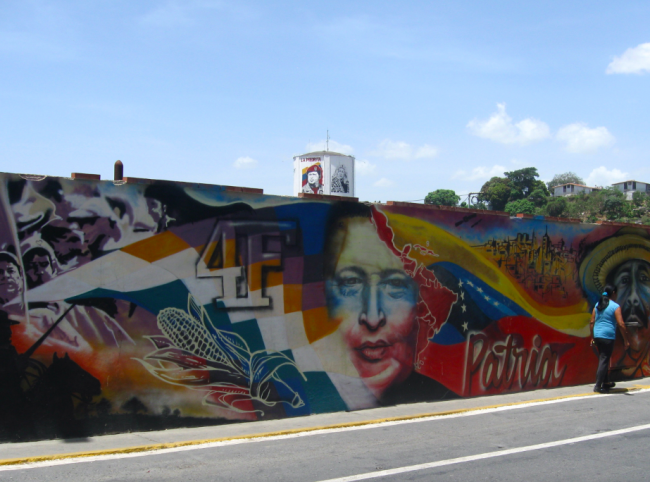 Reading Herman and Chomsky’s Manufacturing Consent as an undergrad had not prepared me for what I saw during my first trip to Venezuela. My Venezuelan friends had warned me that the mainstream media depiction of the country under Hugo Chávez grossly misrepresented the facts on the ground, but as I watched national television channels and CNN on the night of April 11, 2002, I still couldn’t believe my eyes.

I’d been in Caracas for barely 48 hours. The previous day—day two of the “general strike” called by the opposition—I had walked around different neighborhoods and was struck by two distinct realities. In the well-to-do eastern areas of the city, businesses were closed and streets were empty, while the grittier working-class areas were bustling.

Early on April 11, I headed to the Autopista Guaicaipuro to check out the massive opposition march. Most of the marchers I saw had light complexions and were dressed in fashionable clothes. Some of them held signs that said “Chávez = Bin Laden” and called on the United States to intervene, as it had in Afghanistan some six months earlier. The march was supposed to end up at the headquarters of PDVSA, the state oil company, to protest Chávez’s decision to fire the company’s top executives. But suddenly I heard someone over a megaphone announce that the march was now headed to the Miraflores presidential palace to “throw Chávez out and send him to Cuba.”

I jumped on the metro to reach Miraflores before the march and soon found myself in the middle of a huge crowd of mostly dark-skinned Chavistas likely from nearby low-income barrios. Some were brandishing sticks, others were clutching blue, pocket-sized copies of Venezuela’s 1999 Constitution. They shouted that they would defend the palace, and the new constitution, with their lives.

Shortly afterwards, the march arrived. Some of the marchers threw rocks and bottles at a line of presidential guard troops blocking their way and were eventually repelled by clouds of tear gas. Then I heard a popping sound—like fireworks—and a man standing next to me fell to the ground with blood gushing out of his neck. A few people grabbed his legs and arms and ran with his body to try to find help, though it was clearly too late. A man in the crowd yelled “snipers!” and pointed up to a person on the rooftop of a tall building nearby. In the half hour or so that followed, I saw other limp bodies with blood pouring out of head and chest wounds being carried past me.

Around the same time, agents from Caracas’s notorious Metropolitan Police were seen firing rifles at a crowd of Chavistas gathered on the Puente Llaguno, a half-block from the palace. As everyone else ducked for cover, a couple of men pulled out small pistols and fired back at the police agents, though they seemed well out of range. After a few hours, things cooled down. The marchers and the Metropolitan police agents left the area, ambulances came to retrieve the dead and wounded bodies, and we all eventually wandered off, dazed and unsure of what had happened.

Watching TV with my Venezuelan friends later that evening, we were stunned by what we saw. Venezuelan outlets, CNN, and other international channels broadcasted footage of two Puente Llaguno “pistoleros” in an endless loop, without showing what they were shooting at. They all reported that Chávez had ordered his henchmen to open fire on a peaceful march, killing 10 or more people. Top military officers had asked him to resign, and he had done so, though no verified resignation letter was ever produced. A transitional government had been installed, headed by the president of Fedecámaras, the chamber of commerce. The news commentators were jubilant, just as the State Department was in its statements the next day: Venezuela was finally on the right track.

It was only much later that the short-lived coup d’état was meekly recognized as such by the media and the U.S. government. But by that time, they had moved on to other false narratives about the country.

I had gone to Venezuela as a political tourist, expecting to spend a few weeks there learning more about the people’s movement behind el proceso bolivariano. After experiencing the April 11 coup and the stunning popular uprising that helped bring Chávez back to power, I dropped out of grad school in France and ended up living in Caracas for six years, doing various odd jobs including a stint as international relations advisor to Chávez. The entire time I was there I continued to observe two alternate realities, somehow coexisting. In one reality, members of the middle and upper classes saw themselves as the sociedad civil, fighting to restore democracy and libertad via any means necessary. The other reality could be found in low-income communities that had been abandoned by the state for decades and now felt a sense of empowerment and agency within a far more inclusive democracy.

Outside of Venezuela, it was the first of these two realities that shaped the dominant narrative found in the media and in the discourse of Western governments, particularly the U.S. government. The basic storyline was that Chávez was a budding dictator, a “Castro-communist” who had allowed Cubans to take over the country’s security and intelligence apparatus. It didn’t matter that he and his party continuously won competitive, transparent elections; the Chávez government was a threat to freedom and democracy in Venezuela and, for that matter, the rest of Latin America.

And so, sociedad civil leaders were justified in supporting military rebellion. They were justified as well in their effort to force Chávez out of power by paralyzing the oil industry and triggering an economic depression, as they did in late 2002 and early 2003. Having lost a 2004 recall referendum against Chávez, they were also justified in boycotting the 2005 legislative elections, claiming the electoral system was “rigged” against them. Having then lost virtually all their seats in the National Assembly, they were justified in asserting that Chávez and his party controlled every branch of government and that therefore Venezuela was no longer really a democracy.

U.S. officials and mainstream media outlets embraced this vision, while rarely if ever seeing and acknowledging Venezuela’s other reality—that of the barrios and working-class areas. Occasionally, one of the gutsier foreign correspondents would report some inconvenient facts that helped explain Chávez’s enduring popularity: how his government’s social and economic policies had drastically reduced poverty and provided millions with free access to health care, literacy programs, and higher education for the first time. But no major media reported on the really exciting thing going on in the barrios: participatory democracy.

There were the urban land committees and technical water forums, in which residents of low-income neighborhoods worked together on developing plans for improved housing and water and sanitation infrastructure. There were Bolivarian Circles, local groups that discussed and debated Venezuela’s lengthy new constitution and the latest new laws. And there were Local Planning Councils, which later morphed into the communal councils, where members of local communities designed and oversaw state-funded projects for neighborhood improvement. These bodies popped up in many middle-class neighborhoods as well.

This extraordinary beehive of community organizing in the barrios—whether promoted by the Venezuelan government or initiated by the communities themselves—received scant attention in the international media and still receive scant attention to this day. Similarly, when hundreds of thousands of barrio residents have taken to the streets to defend the Bolivarian or socialist project, they are generally ignored by the press, whereas opposition marches and rallies of any size are almost systematically reported on, portrayed as pro-democracy movements regardless of the opposition’s real agenda. When opposition street demonstrations have been violent—as occurred with the deliberately violent guarimbas of 2004 and 2014—the headline still ends up being some version of “peaceful demonstrations brutally repressed by Venezuelan regime.”

While Venezuela has evolved a great deal since I lived there in the 2000s, the dominant U.S. and international narrative is still shaped by the country’s international elites and, increasingly, by hardline, right-wing sectors of Venezuelan society, many of whom now live in Miami-Dade County, Florida. This has led to extreme distortions and omissions in the information that reaches most people in the United States and around the world.

Readers and viewers of mainstream news can be forgiven for believing that self-proclaimed president Juan Guaidó was fighting for a peaceful, democratic transition in Venezuela, when in reality he and his associates openly attempted to provoke a military coup and called for foreign military intervention. They also can be forgiven for not being aware that, while President Nicolás Maduro maintained policies that damaged the Venezuelan economy, multiple studies show that harsh U.S. economic sanctions first imposed in 2017 significantly account for the rapid collapse of the economy since then.

Just as during the Chávez years, the best antidote to the continuous barrage of misinformation about Venezuela is to see the reality—or alternate realities—with one’s own eyes, for instance by joining a fact-finding delegation. Thanks to a vibrant and dedicated solidarity movement in the United States that took form following the 2002 coup, delegations of activists from all walks of life continue to visit Venezuela, often spending time in barrios and remote rural areas where few, if any, international reporters set foot. To better understand the reality behind the alarming and sensational headlines and see how communities continue to organize and find collective solutions in the face of U.S. sanctions and other enormous challenges, consider making the trip. I guarantee that you will come away deeply inspired. You might even end up staying for a while.