On Cuba: Caricatures of the Left and the Absent Cuban People

Viewpoint: A look at the sector of the Left that dismisses any critique of the Cuban government, instead blaming the U.S. embargo for the woes of the Cuban people. 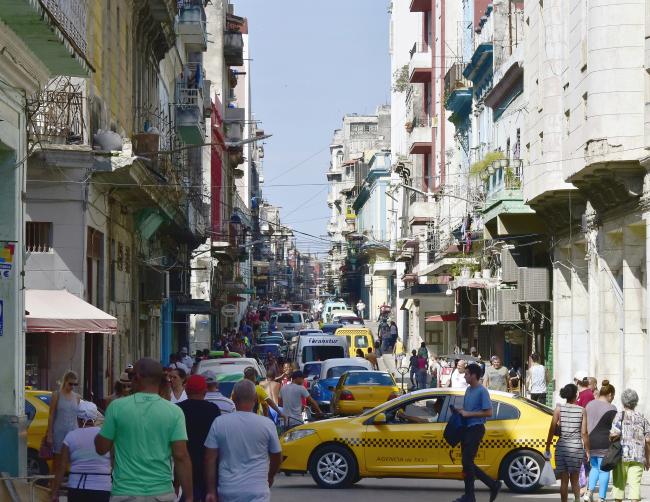 This article was also published in Spanish in Revista Común.

Any critical perspective directed at a sector of the Left blinded by emotional or strategic loyalty to the Cuban government must always navigate turbulent waters. When the criticism occurs in public debate, voices are raised accusing that perspective of being reactionary and disqualifying it for referring to something—authoritarianism, political repression, social exclusion—that supposedly does not exist. One example of this type of reaction is Dr. Aviva Chomsky’s response to my text that was first published in Revista Común, then translated and published in NACLA.

Dr. Chomsky’s article includes several arguments and interpretative biases that are repeatedly seen in analyses of the situation in Cuba. They include exaggerating the importance of the U.S. embargo in determining the internal situation, excluding any internal causes, and overlooking the agency of the Cuban people.

One section of the text that illustrates such a bias reads, “While we oppose the Cuban government’s crackdown on the protesters, we also believe that the Cuban government’s paranoia that sees the malevolent hand of the United States in every challenge to its policies is not really that far-fetched.” There is a causal relationship here: the government’s repression is the result of a legitimate, if seemingly paranoid, perception of an external danger that is then transferred to its own citizens. Even though the statement recognizes the existence of a repressive response on the part of the Cuban government, it justifies that response by using the view that caused it. In this way, the Cuban government’s errors can be attributed to North American actions and not to their own internal dynamics.

The same can be inferred from the argument that what is happening in Cuba cannot be understood without considering the role of the United States. Although it may seem a self-evident truth, as a starting point to discuss Cuba, this de-prioritizes the practices and constitutive logics of a political system below the connections that extend beyond it. The impossibility of ignoring the role of the United States in Cuba casts North American interventionism as the single determining factor in structuring Cuban society. Although it’s not specifically phrased this way, the absence of any reference to internal causes positions U.S. intervention as the fundamental driver not only of this critical situation, but also of the citizens’ demands.

The absence of the Cuban people in discussions of the reality in the country is especially noticeable in references to the so-called grants for funding subversion and the support that they have given in the last decades to LGBTQI+ communities, women, and Afro-Cubans. The way these groups are presented makes it seem that these activist movements were born as a direct result of such funding. This position discounts not only the history of struggle and the demands of these organizations, but also the conditions that prompted them—structural racism, sexism, the increase in violence against women, discrimination due to gender or sexual orientation—all of which are internal causes with long histories of activism.

Beyond Dr. Chomsky’s article, there are other examples that illustrate the position of this self-described Left that, when it comes to Cuba, provides unconditional support for the Cuban state, both directly and indirectly. Two examples in the U.S. context are the Black Lives Matter response to the J11 protests and the “Let Cuba Live” statement, which ran as a full-page ad in the New York Times.

Both declarations, like many others, share a sense of urgency and call for the elimination of the U.S. embargo. This call should not be dismissed, and I appreciate the critical engagement of academics, intellectuals, and political figures in the United States regarding the interventionist track record of their government. But for the BLM statement to describe the embargo as the central element of the current crisis in Cuba—“at the heart of Cuba’s current crisis”—is to ignore the reality in Cuba in a very fundamental way. The blame for “undermining Cubans’ right to choose their own government” is not something that can be placed on the embargo. It should fall primarily on the authoritarian and markedly Stalinist character of the Cuban government.

The “Let Cuba Live” statement does the same. It does not include the embargo as one factor of many in the conflict that should take into account the totalitarian nature of the Cuban regime and its repressive response to the popular protest. In this piece, Cuba is treated once again as a monolithic entity in which the government and people are so united as to be indistinguishable. The subaltern subject thus ends up being the Cuban state in a geopolitical map vis-a-vis U.S. hegemony, and the Cuban people are excluded once again.

To better contextualize the terms of the discussion regarding the Cuban reality, I think it’s also important to examine where—geographically and politically—different viewpoints come from. I appreciate the value of disagreement and the possibility for fruitful conversation that this variety of opinions allows. But, while it does not determine the value of an argument within the conversation, the differences in where these points of view originate highlight important context when we’re talking about Cuba. Anyone from the United States can debate and denounce—explicitly and directly— elements of their own government’s foreign policy without endangering their work status, political rights, and/or personal integrity. In the country where I was born, this is not possible because the government does not guarantee those rights to academic critics. Even living outside Cuba, taking a stance against the government always has consequences. This creates, from the outset, an important epistemic and political difference.

The authoritarianism of the Cuban government can be seen in the systematic exclusion, containment, and limiting of public debate to such a degree that it cannot be ignored in any analysis. It is the Cuban government that has systematically prevented its citizens from participating in the country’s political, social, and economic life. The blame cannot be transferred to the U.S. embargo. Remember that even during the three decades of massive Soviet subsidies—when the embargo was not part of the then-triumphalist narrative of the Cuban government—there was not any real effort to guarantee the independent participation of the people, spaces for political diversity, or anything that would permit the opposition, limitation, and alternation of political power from within Cuban society.

When the responsibility of the Cuban state towards its society is displaced towards the dispute between Cuba and the United States, the exclusion of the Cuban people is justified and reinforced. The subaltern position of the state in the geopolitical map vindicates and normalizes the denial of Cubans’ right to legitimate complaint and protest. Under these combined restrictions, the logical outcome is to see the popular Cuban subject as a passive receptacle of foreign funds. It is conveniently forgotten that in Cuban society there is no space for civil society complaints of any kind and that groups doing this work lack recognized and socially sanctioned spaces, even with foreign funds and the possibilities afforded by the internet in recent years to better make their voices heard. This deep structural asymmetry is the result of the totalitarian design of Cuban society in which the very existence of everything beyond the control of the state is criminalized. This recognition is unavoidable.

Two months ago, the protests on July 11 that sent thousands of Cubans from all over the country into the streets were primarily the result of endogenous causes. Those included government reforms that, in practice, function like authoritarian state capitalism. These reforms have caused deep strain on the Cuban economy, privileging touristic investment over social spending on health and education in an already deteriorated economy incapable of creating entrepreneurial spaces outside of the state’s control. Additionally, the state has systematically suppressed basic rights like the freedom of expression and congregation as a means of disciplining the subalterns. None of these causes can be attributed directly to the U.S. embargo, especially in a country where the state is the key agent in controlling the territory, people, and national resources.

Continuing to treat the Cuban people as inexistent by focusing primarily on geopolitical disputes does little to help the Cuban people’s cause, the legitimacy of their demands, their calls for freedoms essential to the development of social life, or the recognition of the subaltern with respect to the state. We must reject any abstraction—the Revolution, the process, sovereignty—that holds back the diversity of the Cuban nation to the detriment of the popular subaltern subject and that fails to recognize the Cubans who took to the streets to make legitimate demands for their rights—and who continue calling for them despite and in spite of the Cuban state’s repressive machinery and damage control.