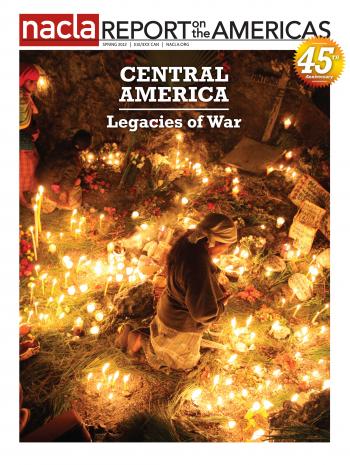 In the 1980s, Central America sank deep into political turmoil amid civil wars, brutal military dictatorships, and U.S. intervention. Three decades later, for the first issue of NACLA's 45th anniversary volume, we look to the legacies of war in Central America. Honduras is reliving its history of military coups, repression, and impunity. In Guatemala, a former dictator is charged with genocide. Across the region, former guerrillas and generals are in power, the military is again taking a disturbingly prominent role in policing, and communities are defending their land from powerful interests.

Between Past and Present
Michael Fox

Soldiers Without a Cause: Why Are Thousands of UN Troops Still in Haiti?
Dan Beeton

21st-Century Solidarity: Video Messages and the Other Campaign
Andalusia Knoll

A Workshop Abandoned: WikiLeaks, U.S. Empire, and Central America
Kirsten Weld
WikiLeaks cables reveal U.S. diplomatic distraction, neglect, and half-heartedness in Central America, as the United States is poised to re-engage the region.
Central American Solidarity, Then and Now: An Interview With Jenny Atlee
Michael Fox
Atlee has been doing solidarity work in Central America for more than 30 years. Many actors are the same, only now it’s more complicated—but just as urgent.
Drugs and Business: Central America Faces Another Round of Violence
Annie Bird
Communities that suffered through the civil wars of the 1980s and 1990s are once again faced with violence as they defend their land against international interests.
FMLN Reflections, 20 Years Later: An Interview With Nidia Díaz
Esther Portillo-Gonzales
El Salvador’s 1992 Peace Accords turned the guerrilla group into a political party. In 2009, the FMLN won the presidency. FMLN International Relations Secretary Nidia Díaz speaks to the present and the past.
Guatemala’s President Under the Lens
Kate Doyle
Honduras: A History That Repeats Itself
Leticia Salomón
The June 28, 2009, coup upset the consolidation of democracy and represents a strong return to the past, when the military repressed protest and the exercise of civic rights.
Justice in Guatemala
Kate Doyle
There are two winds blowing in Guatemala today. One is for justice, and the other is the right-wing outrage that swept retired general Otto Pérez Molina to the presidency in November.
Legacies of the U.S. Invasion of Panama
Julio Yao
Twenty-two years later, the legacy of the U.S. invasion of Panama lives on in profound ways that continue to shape both domestic and foreign policy in Panama.
Nicaragua’s Gangs: Historical Legacy or Contemporary Symptom?
Dennis Rodgers
Nicaragua’s gangs are less a legacy of war and more a consequence of there having been no resolution to the many social, political, and economic issues that led to war and revolution in the first place.
Policing Crime in El Salvador
Sonja Wolf
FMLN president Mauricio Funes came to power in 2009 with a pledge to break the hard-line crime-fighting policy of his predecessors. But recent cabinet shake-ups may herald a return to the past.
Turning the Tide Revisited: An Interview With Noam Chomsky
Greg Grandin
Chomsky discusses emerging trends in Central America, including the rise in violent crimes and the legacy of U.S. intervention in Latin America.

Che: Behind the CIA’s Killing of a Revolutionary
Hobart Spalding
Who Killed Che? by Michael Ratner and Michael Steven Smith, OR Books, 2011, 200 pp., $16 (paperback)
Child Migrant Farmers in the United States: A Quest for a Better Life
Arturo Conde
The Harvest (La Cosecha), directed by U. Roberto Romano, 2011, 80 mins., Cinema Libre Studio, theharvestfilm.com
In the Journals
Bryan Finlayson
New & Noteworthy
The Life of Félix Muruchi: Resistance and Indigenous Recuperation in Bolivia
Jason Tockman
From the Mines to the Streets: A Bolivian Activist’s Life by Benjamin Kohl and Linda Farthing, with Félix Muruchi, University of Texas Press, 2011, 263 pp., $36.85 (hardcover), $22.95 (paperback)
Zapatismo in Chiapas and Beyond
Alicia Swords
Zapatista Spring: Anatomy of a Rebel Water Project and the Lessons of International Solidarity by Ramor Ryan, AK Press, 2011, 211 pp., $16 (paperback)

Guatemala’s Conversion
George Black
This article was originally published in the Update section of the September/October 1982 NACLA Report on the Americas.