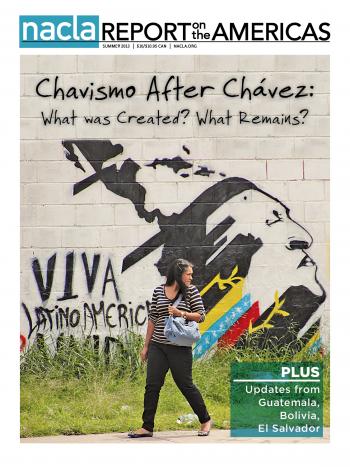 It is not the intention of this report to pass final—or even interim—judgment on the 14-year presidency of Hugo Chávez, on his style of leadership, or on his importance on the world stage. Instead, we are interested in exploring what the movement that bears his name—Chavismo—was all about.

Historic Verdict in Guatemala’s Genocide Case Overturned by Forces of Impunity
Jo-Marie Burt
On May 10, 2013, before a packed courtroom, a Guatemalan court declared that it had found former de-facto president General José Efraín Ríos Montt guilty of genocide and crimes against humanity. Just 10 days after this historic ruling, Guatemala’s Constitutional Court vacated the verdict against Ríos Montt and ordered a partial retrial of the legal proceedings from April 19 forward.

Introduction: Chavismo After Chávez
Fred Rosen
It is not the intention of this report to pass final, or even interim, judgment on the 14-year presidency of Hugo Chávez. Instead, we are interested in exploring what the movement that bears his name—Chavismo—was all about.

Contested Development: The Geopolitics of Bolivia’s TIPNIS Conflict
Emily Achtenberg
The protracted conflict over construction of a highway through the Isiboro-Sécure Indigenous Territory and National Park (TIPNIS) in the Bolivian Amazon has been a defining moment for the government of Evo Morales. How can this intractable conflict be understood?
El Salvador’s Gang Truce: A Historic Opportunity
Uzziel Peña and Tom Gibb
In March 2012, with the help of independent mediators including a Catholic bishop and former defense ministry advisor, gangs in El Salvador signed a truce. A year later the truce has held. Yet the whole initiative remains under a cloud of uncertainty due to the ambivalence or outright hostility of the other main players.
The Don of Teflón
Ross Eventon
Colombian ex-president Álvaro Uribe is an almost ubiquitous presence in the national media. Last year, an extradited paramilitary boss claimed paramilitaries met with Uribe’s advisors during his presidential campaign in 2002. These were not new revelations; paramilitary leaders have openly said Uribe was their man politically.

A U.S. Trade Unionist Chats with Her Venezuelan Counterparts and Finds Democratic Common Ground
Robin Alexander
Last October I arrived in Venezuela a few days prior to the election to try to get a sense of what people where thinking and—since I work for a union—what labor conditions were like in country.
Chávez in The Americas: Increasing Autonomy in Latin America and the Caribbean
Stephanie Pearce
Venezuela’s regionally orientated foreign policy during the Chávez era opened up autonomous policy space for other states in Latin America and the Caribbean. The concrete achievements of a number of mechanisms, including counter-trading and credit provision within the PetroCaribe framework and the recent establishment of a virtual regional currency, the SUCRE, all played a part in this process.

Communes in Progress: An Interview With Atenea Jiménez
Alejandro Velasco
“President Chávez launched the idea of the commune and has promoted its construction. But we are also governing in a state that is liberal bourgeois…. In a similar way, the economic foundations of the country are the same: rentier capitalism. We still live off of oil rents, and that generates a rentier subculture among political elites.”

Just How Radical Is President Nicolás Maduro?
Steve Ellner
The underlying message of Maduro’s campaign was that he was closely tied to the Chávez legacy and would continue where his predecessor left off. Chávez began in 1999 with an emphasis on political reform and ended up embracing socialist rhetoric and promoting widespread expropriations. These transformations are likely to continue but perhaps at a slower pace.

The Communal State: Communal Councils, Communes, and Workplace Democracy
Dario Azzellini
The character of the Bolivarian process—Chavismo—lies in the understanding that social transformation can be constructed from two directions, “from above” and “from below.” Although not free of contradictions and conflicts, this two-track approach has been able to uphold and deepen the process of social transformation in Venezuela.

Women and Chavismo: An Interview with Yanahir Reyes
Michael Fox
“I feel that women today have more self-esteem, more strength. They are familiar with this topic of rights, and this helps them change their relationships, to reconfigure the traditional role of woman.”

The New Socialism
Clifton Ross and Marcy Rein
It’s somehow appropriate that this new analysis of Latin America’s “Pink Tide” should emerge at this critical historical juncture marked by the death of Venezuelan President Hugo Chávez. For well over a decade, new progressive governments in Latin America have been developing post-neoliberal economic and political experiments, with Chávez front and center, stirring the ferment.

Mexico: Prosperous, Competitive, Undergoing an Economic Renaissance?
James MartIn Cypher
It was startling to find the New York Times situating Mexico at the top of a list of five Latin American countries that were enjoying an “economic renaissance.” In Mexico, one is most likely to hear that the social fabric has shredded and that the nation is near a point of decomposition.

Washing U.S. Hands of the Dirty Wars: News Coverage Erases Washington’s Role in State Terror
Kevin Young
Despite the recent substantial coverage of Latin American “dirty wars” of the 1960s through 1980s, U.S. news outlets have usually ignored the role of the U.S. government in supporting these murderous right-wing regimes through military aid and diplomatic support. This pattern also applies to press coverage of current U.S.-backed “dirty wars,” in Honduras and elsewhere.

Cuba: State of the Arts
Dennis James
Cuba has the most original, diverse, and thriving visual and performing arts of any country its size in the world. It is this phenomenon that we, 12 travelers from the United States, went there to observe and examine. This was an “Art and Architecture Tour,” licensed by the State Department as part of the “people to people” exception to the U.S. blockade/embargo on tourism to Cuba.
Lost in the System: Unidentified Bodies on the Border
Robin Reineke
Over the past decade, thousands of people have died in the desert borderlands of the United States. As has been demonstrated repeatedly, the deaths are a result of U.S. border enforcement policies that have made border crossings much more dangerous than they were before the era of border militarization.
The Photographs of Leandro Viana
Caroline Cotta de Mello Freitas (text) and Leandro Viana (photography)
In order to comprehend the scope and significance of the work of Leandro Viana we must begin with an awareness of Brazil as a receiving country for regional migrations. Above all, we must understand the cultural significance of the sizable migratory flows of Bolivians into the city of São Paulo.

An Interview With Juan Bosch
This interview, conducted in 1986, is presented here as part of our “From the Archives” series. It was conducted by Martin Murphy, then an assistant professor of anthropology at the University of Notre Dame.