The historic uprising against inequality reclaimed past struggles and forged new tools for present resistance. 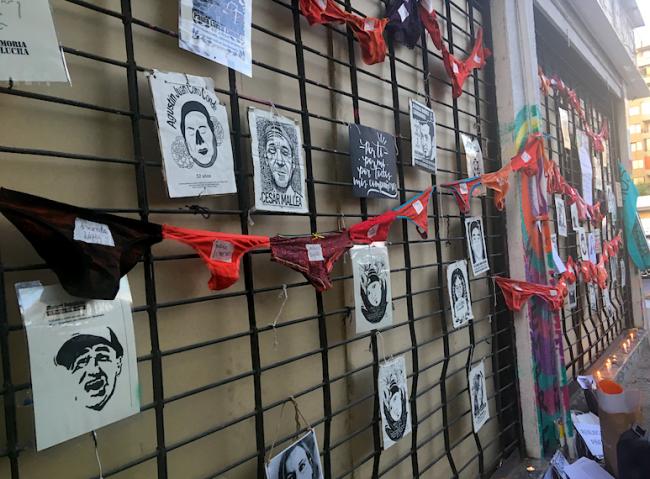 Chilean President Sebastián Piñera is obsessed with moving forward. “Chile is the country we love, its history inspires us, makes us feel proud and committed. Its future is our great cause,” declared his platform ahead of the 2017 presidential election. One platform section promised to create a special Future Council that would offer the president “strategic guidance” with a view “towards the future.” Less than three years later, cries of “La dictadura aún dura” (The dictatorship endures) and “Piñera, asesino igual que Pinochet” (Piñera, a murderer just like Pinochet) rang out in the streets. The popular slogans demanded that before Chile can look forward, it needs to talk about its past.

On October 18, 2019, an unprecedented wave of social mobilizations “awoke” Chile and its historical memories, demonstrating the present relevance of those difficult pasts. For five months, until the Covid-19 pandemic hit in March 2020, people from different generations, classes, and territories clamored for an array of sociopolitical and economic transformations. Their demands, linked to policies inherited from the dictatorship but also to other historically silenced forms of oppression, included calls to end inequality and abuses of power, stop police repression, dismantle patriarchal violence, overhaul the private pension system, and rewrite the 1980 Constitution, created under General Augusto Pinochet’s military regime. This last demand forced the Piñera government to open a constitutional process. In a referendum on October 25, 2020, one year after the uprising began, nearly 80 percent of voters cast their ballots in favor of writing a new constitution. The new charter will be drafted by an elected Constitutional Convention and put to a popular vote in 2022.

The enormous protests, combined with the president’s decision to deploy the military and tanks to control the streets, gave rise to a mnemonic movement: mobilizations of Chilean meanings and representations of the past. These dynamics shook the status quo and intensively peeled back layers of the past. They also unsettled the previous victim-oriented frames of remembering that had limited actions aimed at tackling the legacies of the 17-year Pinochet dictatorship and its human rights crimes. This victim-oriented way of remembering has been dominant throughout Latin America, and memory has been central to processes of truth, justice, and social healing related to historical episodes of state violence. 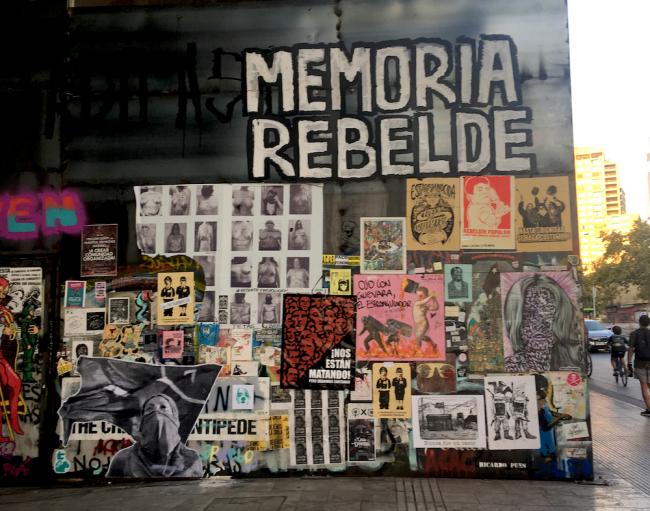 Grappling with this history, memory initiatives across the region have cultivated public recognition of atrocities committed during dictatorships and armed conflicts, informing efforts to establish material and symbolic reparations. During Chile’s 2019-2020 protests, the fresh memories of ongoing police and military repression converged with traces of the dictatorial and colonial past. In these spaces, this memory—and a recognition of the struggles that such abuses have triggered—also shaped collective action amid social turmoil. Memory became central to present social struggles.

Ongoing memory processes can increase not only the sense of belonging among those who mobilize, but also convene new participants and strengthen the legitimacy and continuity of collective demands. Through mobilizations, memory inspires and nurtures protesters, who simultaneously construct a historical memory of the movement. Memory, in other words, is also a political tool.

When Past Violence Becomes Present Struggle

The same day protests over a rise in metro fares spilled over into a national uprising, President Piñera declared a state of emergency. The military began patrolling the streets for the first time since the end of the 1973-1990 military dictatorship. The next day, October 19, 2019, soldiers confronted demonstrators in Plaza Italia, later redubbed Plaza Dignidad, a central square that became the epicenter of the uprising. The army also began to enforce a nighttime curfew. For the younger generations, scenes of soldiers in the streets were unprecedented. For older Chileans, these measures strongly recalled the country’s dictatorial past, triggering old fears and activating a shared feeling of going back in time. On October 25, 2019, more than one million people took to the streets in Santiago—the largest march since the return to democracy. The following day, Piñera finally lifted the week-long curfew. 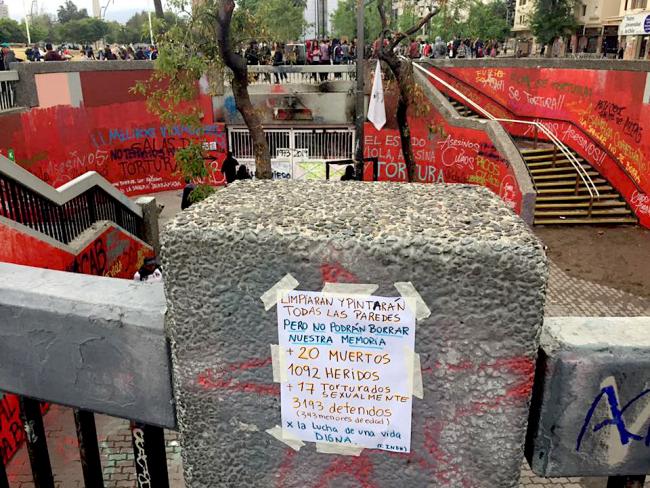 The military presence in public spaces was not only symbolic; the repression was swift and vicious. Between October 18 and November 30, 31 people were killed, at least four of them at the hands of security forces, and more than 250 people suffered eye injuries, mostly from the impacts of rubber bullets. The brutal and unprecedented number of eye injuries triggered powerful metaphors from protesters, including slogans such as “They cannot blind us.” Human rights organizations filed complaints representing more than 3,000 victims of police abuse, including acts of torture and degrading treatment, in five months of protests. Many wondered: what happened to nunca más (never again), the commitment authorities made after the end of the dictatorship? Thirty years later, the repression and the strength of the resistance testified to the fact that past governments’ promises of transformation were far from accomplished. State violence was not only a traumatic dimension of the dictatorial past, but also very much a problem in the present.

For the social movement, remembering became an important form of fighting ongoing state violence. Around the city, demonstrators built spontaneous and ephemeral memorials using the photographs of recent victims of state repression. Some superimposed these recent images onto those of other victims of state abuses. This was the case in Bajos de Mena, a marginalized area in the south of Santiago, where neighbors made memorial-building a priority, among other coordinated actions. After growing exponentially as a result of the neoliberal deregulation of social housing introduced by the Pinochet regime and strengthened under subsequent democratic governments, this neighborhood has come to epitomize urban segregation and marginalization. Memory interventions built in this poor sector served as reminders of the powerful tools society has to fight against the state’s excessive use of force and to expose other forms of violence, such as the extreme segregation and discrimination Bajos de Mena residents experience on a daily basis.

Manuela Badilla Rajevic has a PhD (2019) and MA (2013) in sociology from the New School for Social Research. Currently she works as postdoctoral researcher in the Sociology Department at the University of Valparaíso, Chile, and as researcher at the Millennium Nucleus of Art, Performativity and Activism, Chile.