Garifuna activists in New York are working to change the legal status and improve the lives of Central American immigrants in the United States. 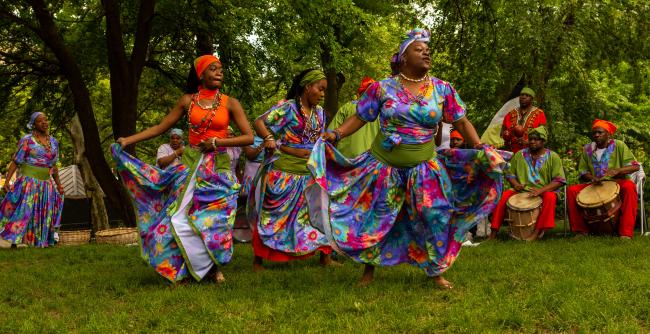 Rosa, an undocumented immigrant from Honduras, has been in the United States since 2019, waiting for her political asylum case to be heard. She lives in a homeless shelter in the Bronx with her two daughters, after first fleeing from Honduras, and then from her physically abusive husband in Ohio.

“It’s impossible to avoid being scared sometimes,” she said. “Sometimes I‘m scared to ask for work or to ask for help. It feels as if the doors are closing on you when you don’t have a [legal] status.”

Rosa is taking an online college course to become a medical assistant. “I study, but at the same time, I wonder how I’ll find work after graduating [without a work permit],” she said.  She’s only been able to find temporary under-the-table jobs in housekeeping, a sad and ironic reality after she left Honduras due to a lack of work opportunities.

“I was laid off at every job I had,” Rosa said. “Once because I’m Black, and another time because there’s really no permanent work in Honduras.”

Rosa is a member of the Afro-Indigenous Garifuna community and one of approximately 302,000 undocumented immigrants from Central America and Mexico living in New York City.

The Migration Policy Institute estimates that in the United States there are 1.9 million undocumented Central Americans, many of whom, like Rosa, are living in precarious situations.

Bronx-based activists Katy Gil and Mirtha Colón are trying to help many of those immigrants by asking the Biden administration to approve a new Temporary Protected Status (TPS) designation for Central America, which has the potential to protect thousands—if not millions—from deportation.

Alongside the transnational organization Alianza Americas, they’ve been leading a campaign for the new designation justified by the devastation caused by hurricanes Eta and Iota in 2020, which affected 9.3 million people and caused at least $42.6 million in damage. So far, an online petition has amassed over 3,750 signatures.

The proposed TPS campaign would apply to El Salvador, Honduras, Nicaragua, and Guatemala.

Gil and Colón are part of the Central American Afro-Indigenous Garifuna community in New York City that, according to their own estimates, is at least 300,000 people strong.

Over the past decade, the number of unauthorized Hondurans crossing into the United States has increased exponentially. In 2021 alone, over 308,900 Hondurans have been apprehended along the southern border. There are no exact numbers for how many were Garifuna.

“Our country was already devastated by its political conditions, it’s social conditions, and a lack of employment,” said Katy Gil. “Now these two consecutive hurricanes have pushed us back 20 years.”

The situation in Honduras is particularly hard on the Garifuna, who are subject to forced displacement, a lack of employment, and often can’t meet their basic needs, said Garifuna journalist and social investigator Kenny Castillo. “I think the main reason [for all of these problems] is racial discrimination,” he said.

The displacement began, according to Castillo, with a constitutional amendment in 1998 that allowed foreigners to buy up land along the Honduran coast—the historical home of the Garifuna. That led to hotel and tourism development coupled with inadequate investment in public services in Garifuna communities.

“There’s a saying here: where the Garifuna community begins, the pavement ends,” said Castillo, referring to the lack of infrastructure.

Castillo has taken it upon himself to record all of the violent deaths of Garifunas between 2019 and the present; in 2019 he recorded 20, including human rights activist Mirna Teresa Suazo. Last year, the kidnapping of five men—four of whom were Garifuna—again demonstrated the dangers faced by the community.

Colón, who immigrated to the Bronx over 50 years ago, returns to her native country regularly. After visiting Honduras last November, when the hurricanes had passed, Colón saw “entire communities living on the street, using trash bags to cover themselves.”

New York City is home to the largest Garifuna population in the United States, and perhaps in the world, thanks to a large exodus from the coastal regions of Honduras, Guatemala, Nicaragua, and Belize.

Colón attested to this Garifuna mass-migration, saying, “when you go to the communities in Honduras, you see the emptiness from people that have left. You see closed houses, you see empty schools.”

The Garifuna community is so established in New York that 16 “patronatos,” the most local level of government in Honduras, have formed representative bodies in the Bronx, replicating their community structures from their home country.

“The Garifuna community has become a hidden majority in the borough,” said local Bronx assemblymember Nathalia Fernandez. Fernandez is also working toward getting the new TPS designation approved and has brought up the new TPS designation with Senate Majority Leader Chuck Schumer. It is a process “that’s going to take an effort on all levels—from the City Council and the State Legislatures advocating to our federal partners to help change the status,” she said.

TPS is a U.S. Department of Homeland Security (DHS) program that started in 1990 under George H. W. Bush. It provides a shield from deportation to over 320,000 nationals already residing in the United States who come from countries that, because of  natural disasters, armed conflicts, or epidemics, are deemed as having “unsafe conditions.”

Once a TPS designation is approved, recipients are eligible for temporary work visas in the United States. This not only benefits those migrants, but also the Central American countries, where 2020 remittances made up 23.4 percent of Honduras’s GDP, 24.1 percent in El Salvador, and 14.7 percent in Guatemala and Nicaragua. TPS also provides the perfect strategic opportunity to “save the lives” of undocumented immigrants that otherwise would have to battle out their own individual assylum cases in court—or be turned away via Titles 8 or 42. With TPS, they gain collective bargaining power.  But the designation does not offer a path to citizenship. While in theory the status is “temporary,” lasting only 18 months, it has historically been extended for long periods—in some cases over two decades.

The United States designated TPS for Hondurans, Nicaraguans, and El Salvadorians after a series of hurricanes and earthquakes between 1998 and 2001. Since taking office, Biden’s administration has approved new TPS designations for Venezuelan, Burmese, and Haitian nationals.

In June, Gil and Colón’s ally in Congress, Ritchie Torres, who they’ve worked with since he was a Bronx city councilmember, asked Secretary Alejandro Mayorkas to consider approving the Central American designation.

“We are looking at the conditions in the countries that you identified, Congressman Torres,” said Mayorkas. “We fully recognize that climate disasters are considered a factor in our review.” DHS did not respond to a request for comment.

In recent years, starting with the Trump administration, TPS has become increasingly politicized. Hundreds of thousands were left in limbo when the administration tried to terminate the designations for Nicaragua, Honduras, and Haiti in 2017, leading to the high-profile court cases Ramos v Nielsen and Bhattarai v Nielsen. These cases—which are still pending final results—have led to automatic 16-month extensions for TPS holders, some of whom have lived more years in the United States than in their countries of origin.

The plaintiffs in Ramos v Nielsen allege that Trump’s racist and anti-immigrant remarks, calling Haiti and other nations “shithole countries,” led to the program’s termination.

Gil and Colón’s proposal involves starting the process all over again with a new designation. This is not a perfect solution. It could be terminated by the next president, and doesn’t leave a path to citizenship or permanent residency, which risks putting thousands—if not millions—more immigrants in limbo. TPS recipients also lose their status if they leave the United States without an Advance Parole Document, which has a $575 price tag. But it’s the only immediately available option on the table.

“People can’t mobilize the way they should be able to with TPS,” said Colón. “But if you take away TPS”—or in this case don’t redesignate it—“you’re taking away the few rights they have.”

Yanira Arias, the national campaigns manager for Alianza Americas, thinks TPS is the best step forward for the Biden administration while they work towards other solutions in the future. That’s because TPS is already “in the toolbox” and “can save lives,” she said.

Arias has been a recipient of TPS since 2001 after fleeing from gender violence in her native El Salvador in 2000.

Arias divides her time between advocating for the new designation and a path to permanent residency and citizenship for current TPS holders like herself—incidentally one of Biden’s campaign promises.

She sees the two fights as interconnected.

TPS is a good option for undocumented people like Rosa, Arias said, because “you can still ask for the TPS status, and you won't lose your case for asylum. So chances are that maybe you won't have a positive response in your asylum case, but you remain protected under TPS.”

In the meantime, life is difficult for many Garifuna living in the United States. Martin, a single father, is another undocumented Garifuna immigrant who has lived in Texas with his four children since 2019.

“I decided to leave Honduras with my whole family because I have a teenage daughter that gangs were trying to recruit,” he said. “Because she wouldn’t join, I began to receive death threats.”

Martin just wants “normal things” for his family, like food, shelter, and a sense of stability.

Without a work permit or any guaranteed rights, he can’t afford to take even a day off from work.

Like Rosa, Martin has applied for political asylum but doesn’t know when his day in court will be. He’d like to move to New York City, in hopes of more community support, but hasn’t been able to so far.

But in New York City, Garifuna are also struggling. Gil and Colón run an organization called Casa Yurumein that has provided food daily to over 600 families living in shelters during the pandemic.

“There’s a significant number of single Garifuna mothers [like Rosa] living in shelters and temporary homes,” said Gil. “Even though they have a roof over their heads, in most cases they don’t have access to a kitchen; how are they going to feed their children?”

Gil views access to nutrition as one of the community’s most immediate challenges. According to pre-pandemic data, 1.1 million New York City residents are food insecure.

If the new TPS designation were approved, it would apply to Rosa and Martin—even though they weren’t directly affected by the hurricanes—because it would deem Honduras too unstable for their return. This would allow them to find legal work, better support their families, and improve their quality of life in the United States.

Dashiell Allen is a freelance journalist based in New York City. He is a regular contributor to Latina Republic and the Honduran LGBTQ publication Reportar Sin Miedo.