The Politics of Human Rights

The U.S. government and its right-wing allies are using human rights as a political weapon to discredit those governments in the region that have most aggressively undermined U.S. hegemony. This article was originally published as the introduction to the September/October 2011 issue of the NACLA Report on the Americas.

This article was originally published as the introduction to the September/October 2011 issue of NACLA Report on the Americas, "The Politics of Human Rights." 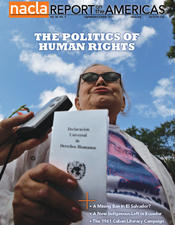 In September, the Inter-American Court of Human Rights ordered the Venezuelan government to allow opposition politician Leopoldo López to run for president in the country’s upcoming election in October 2012. López had sued the government after Venezuela’s General Accountability Office (GAO) barred him from running because he had allegedly engaged in corrupt practices. The GAO found that when López worked for the state oil company, for example, he had funneled company money to Primero Justicia, an NGO that later became a political party, and that as mayor of the municipality of Chacao, he had similarly misused state funds.1 Part of the court’s ruling in favor of López rested on the fact that the accusations against him were never proved in court.

The government of President Hugo Chávez, in turn, insists that the sanction against López is allowed under the law governing the GAO’s anti-corruption operations and that most of the some 260 Venezuelans who are also barred from running for office are from Chávez’s own ruling coalition.2 The government has vowed not to comply with the court ruling, citing its right to self-determination.

This conflict between Venezuela and the OAS court follows on the heels of another fight in February 2010, when the Inter-American Commission on Human Rights (IACHR) issued a report condemning human rights violations in Venezuela. Although the report praised the country’s progress in protecting social rights like nutrition and literacy, it charged the Venezuelan government with having barred candidates like López from running for office without due process, intimidating opposition demonstrators, undermining judicial independence, censoring opposition media, maintaining poor prison conditions, and failing to provide adequate security in cities ridden with violent crime, which the commission identified as its “gravest concern.” Chávez called the report “pure garbage” and threatened to pull Venezuela out of the commission as a member state.3 (Venezuela remains a member.)

Like López, Bolivia’s right-wing opposition has appealed to the Organization of American States’ human rights system, in an attempt to cast its politicians and supporters as victims of a repressive government led by President Evo Morales. Courts, however, are not the only mise-en-scène for such efforts. Take Cuba’s Damas de Blanco—a group of women protesting the imprisonment of their loved ones, now all released. Rather than seeking legal recourse at the OAS, they appealed to the court of public opinion with their silent marches and performances of aggrieved womanhood, all duly covered by a sympathetic international media. U.S. foreign policy officials, meanwhile, have egged on the Latin American right’s fight against 21st-century socialism.

“We must not allow these tyrants to trample democratic principles, harbor extremist groups, and ally themselves with other anti-American regimes to increase their influence and capability in the Western Hemisphere,” said Representative Ileana Ros-Lehtinen (R-Fla.) at a conference held in May called “Legitimacy Lost: How 21st Century Socialism Subverts Democracy in Latin America” (see "Legitimacy Lost: Human Rights Discourse in Washington," for more).

Once upon a time, a Pinochet could openly assert that, as he once said, “human rights are an invention, a very wise one, of the Marxists.”5 Today’s neoliberal right, however, would never make the blunder of portraying human rights as a tool opportunistically used for political ends. Yet in their hands it is just that.

This edition of NACLA collects a handful of essays on the question of human rights in Latin America as a political weapon used by the U.S. government in concert with its right-wing allies in an attempt to discredit those governments in the region that have most aggressively undermined U.S. hegemony. In this respect, today’s Latin American right and its North American allies have taken up the rhetoric of Reagan’s foreign policy, which adopted human rights as its central trope. It is no accident, then, that the aforementioned conference was convened by Otto Reich, Reagan’s chief propagandist for the Nicaraguan Contras and later an official at the State Department’s Western Hemisphere division under Bush I and II.

President Carter is typically credited with establishing human rights as the dominant frame through which U.S. foreign policy would be prosecuted, displacing the rhetoric of anti-Communism and Cold War national security, which were no longer viable in the post–Vietnam War era. But it was Reagan’s administration that, after some internal squabbling, settled on human rights as a primary public justification for its policies while also upholding military intervention as a necessary component of its human rights arsenal.

The real pillar of this doctrine was pure hypocrisy: Even as Reagan extolled the virtues of protecting democracy, his government was arming, financing, and training the worst human rights abusers in the hemisphere since the Southern Cone dictatorships—the death-squad governments of Guatemala, El Salvador, and Honduras, along with the Contras, who waged a terror war against Nicaraguan civil society under the Sandinistas. This history is by now well told, but nonetheless worth remembering as the seedbed of the discourse of anti-Communist human rights, redeployed in today’s hemisphere in a new context.

With the exception of Honduras, where in 2009 the right scored a victory through a military coup—justified, naturally, on legal grounds—violent methods are no longer preferred. In the era of left-leaning governments and a right wing that now finds itself in the unfamiliar position of the political opposition, peaceful methods are emphasized. This is not an innovation. Central to Reagan’s human rights doctrine was not only military intervention, or “hard” power, but also the soft power of moral authority and “democracy promotion.” It was under Reagan that the National Endowment for Democracy (NED) was founded with the mandate to nonviolently support pro-U.S. dissidents in foreign lands. James Peck, author of the recently published Ideal Illusions: How the U.S. Government Co-opted Human Rights, analyzes this as an example of brilliant ideological manipulation—“transmuting the old anticommunist vocabulary into the language of democratization.”4

We begin this volume with an essay on the Damas de Blanco by political scientist Lorraine Bayard de Volo, who analyzes the Damas phenomenon using diplomatic cables from the U.S. Interests Section in Havana, recently released by WikiLeaks. The cables confirm what few could have doubted: U.S. officials work closely with the Damas, who along with other dissident groups figure prominently in U.S. policy toward Cuba and have likely received U.S. funding.

International relations scholar Arturo López-Levy discusses the centerpiece of U.S policy toward Cuba, the Helms-Burton law, which mandates just this kind of “soft” approach to bolstering civil society and “democracy promotion” in Cuba. As López-Levy notes, the U.S. embargo on Cuba is now wholly justified on human rights grounds, yet the law itself violates basic principles of the human rights model established by the UN Universal Declaration of Human Rights.

Anthropologist Nicole Fabricant sketches a critical portrait of Bolivia’s aggrieved, regionalist right wingers, who today assert themselves as the victims of a totalitarian regime under President Evo Morales. As Fabricant notes, the opposition centered in the city of Santa Cruz has opted not to pursue its claims in national court but, taking a cue from their Venezuelan counterparts, have appealed to the IACHR and reached out to their comrades in the United States.

Venezuela, where the NED, Freedom House, and other entities of the U.S. democracy-promotion apparatus have maintained a robust presence in the last decade, was the incubator of this new right-wing tack. Gregory Wilpert, a sociologist and frequent commentator on Venezuelan politics, argues that the right has successfully harnessed the power of the country’s political polarization, staging protests and other actions that are deliberately calculated to provoke conflict and create spectacles in which the Chávez government will react in a heavy-handed manner.

Finally, NACLA editor Michael Fox interviews Bertha Oliva, a leading human rights activist in Honduras. Her organization, COFADEH, was founded in 1982, just as the Reagan administration was discovering human rights to be the potent rhetorical weapon it is today. Today, Honduras is seeing a wave of unofficial terror in the post-coup era, and in Honduras too, officialdom has learned to genuflect to the values of rights.

“Governments can commit horrors in the name of human rights,” Oliva told NACLA, “[So] one has to be like an eagle, never asleep and always vigilant.”

Pablo Morales is an editor of NACLA Report on the Americas.

2. Embassy of the Bolivarian Republic of Venezuela, “Fact Sheet: Myths and Realities on the Disqualifications From Holding Public Office,” August 11, 2008.