On Sunday, voters in Nicaragua and Guatemala chose their country’s next presidents. In Nicaragua, President Daniel Ortega sailed to victory and a third term. In Guatemala, retired general Otto Perez Molina was elected despite concerns over his involvement in human rights violations during the former military regime.

On Sunday, November 6, voters in both Nicaragua and Guatemala chose their country’s next presidents. 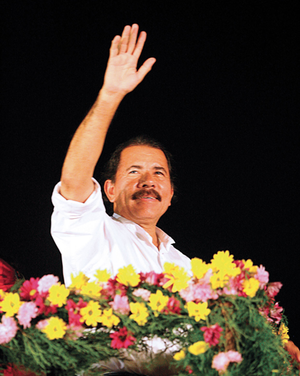 Daniel Ortega (britannica.com)icaragua, President Daniel Ortega of the Sandinista National Liberation Front sailed to victory and a third term with nearly 63% of the vote, over the 38% garnered by radio personality Fabio Gadea of the Independent Liberal Party.

In Guatemala’s second round election, retired general Otto Perez Molina of the conservative Patriot Party was elected with 54% support, over tycoon Manuel Baldizon of the Democratic Freedom Revival Party, who garnered 46%. According to the Guatemalan Board of Elections, over 60% of eligible voters turned out to the polls.

During scattered violence in the lead-up to the general elections, military vehicles and ballot boxes were burned in Nicaragua, and at least 38 people were killed in Guatemala. According to the Associated Press, Mexican gangs operating in Guatemala, including Los Zetas, have been blamed for some of the violence.

Ortega, 65, is popular among Nicaraguans for his leftist policies aimed at reducing poverty in Latin America’s poorest country. “[Ortega’s re-election] is a clear sign of democracy at work—true, honest democracy, not top-down neoliberalism. . . . People by and large support what Ortega is trying to do,” said Brian Peterson of the Nicaragua Network, who traveled to Nicaragua in June to investigate U.S. intervention in the lead-up to Sunday’s Nicaraguan elections.

First elected in 1984, Ortega was voted out of office his first term in 1990, only to regain office for a second term in 2006. The U.S. government claims that Ortega has manipulated state institutions as part of a scheme to keep himself in power. In 2009,  the Nicaraguan Supreme Court abolished presidential term limits, clearing the way for Ortega’s reelection.

The election of Perez was a significant event in Guatemala, which is still recovering from its brutal 36-year civil war. The war gave rise to a military dictatorship in the 1980s, and left over 200,000 people dead. Perez, 61, is the first military general to be elected president since the end of military rule in 1996. His policy of iron fist, or mano duro, in fighting against the rampant crime that plagues Guatemala won the support of many voters at the polls. 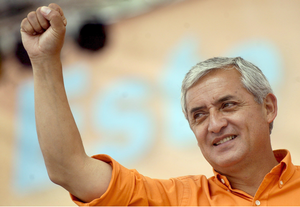 “From the first day on, Guatemalans are going to see they’ve got a president who is committed to defending the lives and safety of all Guatemalans,” Perez said on Sunday, according to Reuters.

Human rights groups, however, are concerned about Perez’s participation in the former military regime that brutally ruled Guatemala for two decades. Although Perez has denied any involvement, indigenous and human rights groups say Perez has committed grave human rights violations, including genocide and torture during a 1982 military campaign in the Quiché Highlands. Those claims remain under investigation by the United Nations.

“[Perez has] always declared that he was not involved in the genocidal campaign of 1982 in the Quiché Highlands, but in fact a video showing Allan Nairn interviewing him, precisely as he stands over several battered corpses, has been making the rounds in Guatemala,” said Harbury.

Bryan Finlayson is a NACLA editorial intern. For more on Guatemala and Nicaragua, see "Martial Law, Repression, and Remilitarization in Guatemala," and "Nicaragua: What War Looks Like," from the September/October 2011 NACLA Report. Subscribe now to NACLA.