Drugs and Business: Central America Faces Another Round of Violence

Communities that suffered through the civil wars of the 1980s and 1990s are once again faced with violence as they defend their land against international interests. This article was published in the Spring 2012 issue of the NACLA Report on the Americas, "Central America: Legacies of War."

The following article was published in the Spring 2012 issue of the NACLA Report on the Americas, "Central America: Legacies of War."

On August 23 about 300 campesinos from the Nueva Esperanza community, near the Laguna del Tigre Natural Park in northern Guatemala, were evicted from the lands to which they held title and forced across the border into Mexico. Interior Minister Carlos Menocal justified the action, claiming the families assisted drug traffickers, though he presented no evidence.1

While drug trafficking corridors have proliferated through Central America’s natural reserves over the last decade, Nueva Esperanza’s real crime appears to have been that it was located in the way of the Cuatro Balam mega-tourism project. Cuatro Balam is a planned 14,000-square-mile tourism complex amid the Mayan Biosphere cluster of natural reserves and an array of Mayan archaeological sites, all to be united by a proposed electric train and linked to Chiapas, Mexico, via a new highway.

Nueva Esperanza is just one of dozens of communities across Central America that have recently been evicted, threatened, or repressed by powerful interests promoting large-scale development projects, including tourism corridors, open-pit mines, biofuel plantations, hydroelectric dams, carbon-credit forests, and more. The violence has come from the state, in the name of the “war on drugs” that is spilling over from Mexico and Colombia into the region, and from multinational corporations bent on advancing investments. The result is the same: Communities that suffered through the civil wars of the 1980s and 1990s are once again faced with violence as they defend their land against international interests.

Corporations employ large private-security forces that work in close collaboration with the military and the police. In Guatemala’s Polochic Valley, Mayan communities report that the Chabil Utzaj sugarcane corporation—owned by the Pellas Development Group of Nicaragua—enlists armed gangs linked to drug trafficking to attack them. These are the same armed groups that threatened and assaulted communities in the 1980s, also over land rights disputes; this represents the resurgence of the business- and government-backed death squads of the 1980s, which killed and disappeared thousands.

Killings, intimidation, and violence against indigenous and environmental activists has been widespread in places like Cabanas in El Salvador; Polochic Valley, San Miguel Ixtahuacán, and San Juan Sacatepéquez in Guatemala; and the Siria Valley, the Río Plátano, and the Aguán Valley in Honduras. 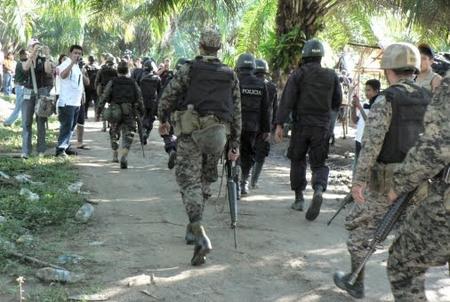 Militarization of the Lower Aguán Valley (Foto: G. Trucchi/arsncanada.blogspot.com)Over the last two years, roughly 60 land rights activists have been killed in Aguán, due to conflicts with African palm oil producers Dinant and Jarimar. Private security forces work closely with the police and military. Death-squad-style killings of land rights activists began with the militarization of the region in March 2010.2 Farmers report that the soldiers and security guards swap uniforms depending on the context, and that security guards have been trained in the 15th Military Battalion. The Honduran daily La Tribuna reported on August 30 that the U.S. Army Rangers were conducting trainings for the 15th Battalion.

In the Polochic Valley of Guatemala, 14 communities were violently evicted in March 2011 by Chabil Utzaj, also involved in ethanol production. In the same valley dozens of Kekchi Maya communities await eviction by the Fénix nickel mine, until recently owned by Canada’s Hudbay Minerals. At least four Kekchi land rights defenders have been killed since 2009 in related disputes, and arrest warrants exist for the heads of the Chabil Utzaj and Fénix security forces. Nevertheless, the security forces continue to collaborate openly with the police and military, and all signs are that militarization, under the framework of the war on drugs, will add fuel to the fire.

In a June 2011 SICA conference in Guatemala City, Secretary of State Hillary Clinton announced that SICA’s security strategy was expected to have an annual budget of about $1 billion and that the United States would contribute $300 million.3 The IDB plans to disperse 22 loans for the strategy and promote what it calls the “Colombian model” of police reform. Though the IDB claims militarization is not part of the plan, the reality in the region shows this to be untrue.

On November 30, the Honduran congress passed a law permitting the military to perform police functions. Under U.S. pressure, the same month, left-wing Salvadoran president Mauricio Funes named former general Munguía Payés to head the Ministry of Interior. Guatemala’s new president, former general Otto Pérez Molina, has posed former military operatives and Kaibiles to key positions on all levels, even in the National Program for Reparations to victims of war crimes.

Despite surprising comments in support of legalizing drugs, Pérez Molina has promised to employ the military in anti-drug activities, particularly the Kaibiles, a Guatemalan army special forces unit. His announcement came despite the April 6, 2011, report from Guatemalan vice minister of security Mario Castañeda that current and former Kaibiles were training Zetas in northern Guatemala and participated in drug smuggling.4

In 2011 two regional security operations and training centers were opened in Panama. In April the Operations Center for SICA’s Regional Security Strategy (COSR) was opened in the former Rodman Marine Barracks. CORS will receive military and police representatives from throughout Central America and the Dominican Republic, and logistical support from the Joint Inter Agency Task Force–South (JIATF-S), which coordinates actions between the U.S. military, Coast Guard, Border Patrol, the State Department, the Department of Justice, and others. On December 6, Panamanian minister of public security José Raúl Mulino announced the opening of a regional training center for security forces from throughout Central America, run by U.S. and Colombian forces in Panama.

Direct U.S. security presence in the region is increasing. On January 18, Honduran president Porfirio Lobo went on a surprise visit to Miami, home of the U.S. Southern Command, to meet with high-level Obama administration officials, who announced that the United States would send personnel to assist in security operations in Honduras. State Department security specialist Oliver Garza was among the first to go on February 7, as special adviser to Lobo. U.S. Army Rangers, the Drug Enforcement Administration (DEA), the FBI, and the Border Patrol have all been carrying out direct operations and training in the region. Five years ago the DEA launched Foreign-deployed Advisory and Support Team (FAST), a program that deploys teams of 10 special agents to directly engage in security actions.

The militarization of the region has been concentrated where there are conflicts over control of land and resources. In other words, militarization in Central America is less about controlling crime than ensuring access to natural resources.

In September 2006 the DEA participated in raids in the northern-Guatemalan departments of San Marcos and Quiché, close to the Mexican border.5 This coincided with protests and municipal referenda in indigenous communities opposing the installation of the nearby multimillion-dollar Marlin gold mine, owned by Montana Exploradora de Guatemala, a subsidiary of the Canadian company Goldcorp.

On January 30, Panamanian Ngöbe-Buglé indigenous activists began six days of protests against hydroelectric dam and mining concessions on their land, blocking the Inter-American highway in the departments of Veraguas and Chiriquí. On February 5 Panamanian security forces violently evicted their occupation. One teenage protester was shot and killed, 32 were wounded, and 41 were arrested.

The end of Central America’s brutal wars and repression in the 1990s was followed by a flood of international investment, neoliberal development initiatives, such as Plan Puebla Panama, launched in 2001, and the Central American Free Trade Agreement, largely passed in 2005. Unfortunately, much of the transnational investment has come at the expense of indigenous and impoverished communities. Now, with the support of the U.S. government, the failed policies of fighting crime and drug trafficking in Mexico and Colombia are being launched in Central America and they appear to be the pretext for another round of violence and massive internal displacement.

Annie Bird is Co-director of Rights Action in Washington. She was based in Central America for 14 years and works extensively in partnership with community activists and human rights organizations in the region.

Read the rest of the Spring 2012 issue of the NACLA Report on the Americas, "Central America: Legacies of War."