A Blueprint for Central America? 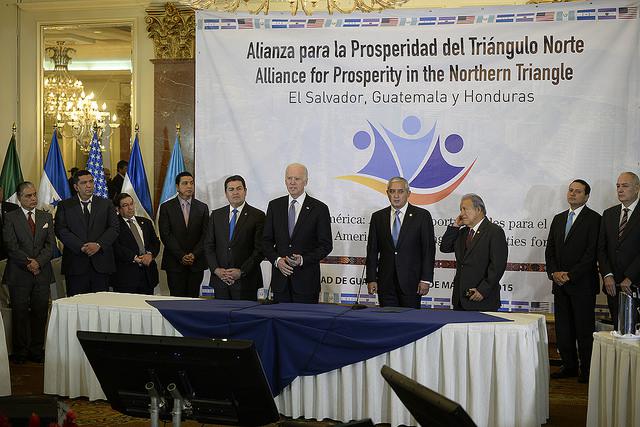 In an attempt to curb the flow of thousands of unaccompanied children who flee to the US, the Obama administration has proposed ‘Plan Central America’: a US$1 billion aid program for improving the economic and security situation in El Salvador, Guatemala, and Honduras, collectively known as the Northern Triangle. The US Congress is expected to vote on it later this summer.

When Vice President Joe Biden presented the plan in an Op-Ed in the New York Times, he argued for increased training and support for police and armed forces, measures to increase transparency and accountability including strengthening tax collection, and encouraging foreign direct investment through market liberalization.

The plan, the Vice President wrote, will be modelled after Plan Colombia, continuing a Washington tradition of coupling neoliberal projects with military aid. A similar approach was applied in Mexico with the 2008 implementation of the Mérida Initiative. All three plans have in common a belief that complex social and economic problems, and the outcomes of these, such as a rampant narcotics industry, can be resolved through ramped-up military and security spending.

Revisiting Plan Colombia can be instructive as to what could lie ahead. For over ten years, it provided Colombia with over US$9 billion in military and financial aid aimed at fighting the narcotics industry. As one of the original designers, Biden argues that the program led to “notable improvements in security, governance and human rights”.

When Plan Colombia was introduced in 1999 by then Colombian president Pastrana, it was presented as an ambitious strategy to end the ongoing violent conflict. In close collaboration with the US, the Plan set out to defeat illegal armed groups while offering social and economic help to the poor and eliminate the cultivation of coca leaf, a key component in cocaine.

During his 1998 campaign, Pastrana had vowed to improve stability through a softer approach than his predecessor Ernesto Samper. The president claimed the narcotics industry reflected a ‘social problem whose solution must pass through the solution to the armed conflict’ and that Colombia needed help ‘to implement some sort of “Marshall Plan”’. Pastrana argued that once increased social programs had resolvedthe armed conflict, the growing narcotics industry be curbed. He explicitly saw the drug business not as a cause but as a consequence of the conflict.

However, US funding came with a condition: a serious redesign making counternarcotics the foremost objective. Of the first US$1.3 billion provided by the US, Pastrana had originally allocated 55 percent for the Colombian Armed Forces with the remaining 45 percent for funding development programs. The US-approved version allocated 80 percent to the military. This emphasis on militarization continued, particularly during the Bush administrations and the ‘democratic security’ policy of Álvaro Uribe who succeeded Pastrana in 2002.

The most important tactic used against coca production was aerial fumigation. After an initial decline, coca cultivation shot back up, a predictable outcome given the dire situation poor Colombian farmers found themselves in. Once all their crops were destroyed, many reverted to simply planting more coca. In this way, fumigation paradoxically led to more coca fields, while also damaging the environment and the rural population’s health.

Plan Colombia strove to encourage crop substitution, by providing financial assistance to farmers during a transition to legal crops. But not only was this assistance inadequate to support a family, it generated only about a quarter the average annual profit from two hectares of coca. Farmers who were willing to cooperate in many cases never received the promised aid money. By April 2002, 37,000 peasants had signed the crop substitution pact but only 8,500 had received any financial support. In some cases the alternative crops were accidentally fumigated by spray planes.

The plan also lacked any long-term strategy. Crop substitution left farmers with a harvest but no way of getting it to market. This contrasted starkly to prior arrangements with drug traffickers who came to a farmer’s land to pick up coca paste. Given the limited transport infrastructure in Colombia’s remote areas, many farmers concluded that planting more coca plants was their only viable economic option.

The most important goal was to crackdown on armed groups involved in the drug trade. Officially this was done through counter-narcotics operations, but in reality the Colombian Armed Forces were trained by US military personnel in counterinsurgency tactics, or COIN. Their main target were the leftist Revolutionary Armed Forces of Colombia (FARC) and to a lesser extent the National Liberation Army (ELN). Little evidence exists however that the FARC were actively involved in the drug trade, although they often taxed coca crops, especially where they functioned as the local government. Nonetheless, Plan Colombia presented the FARC as ‘narcoguerrillas’, a moniker switched to ‘narcoterrorists’ immediately after 9/11, in order to fit them within the global War on Terror framework.

On the other hand, Plan Colombia did not focus on the notorious Colombian paramilitary forces, collectively known as the Autodefensas Unidas de Colombia (AUC). These paramilitaries had strong links with several high ranking Colombian officials, including members of Congress, and direct family members of former President Uribe. The long-time leader of the AUC, Carlos Castaño who was murdered in 2004, revealed publicly that seventy percent of the AUC’s income came directly from trafficking. Nevertheless the AUC were not a target in the “counternarcotics” operations of Plan Colombia.

Human rights violations skyrocketed. By 2001 the military had managed to push a National Security bill through Congress, which reduced outside scrutiny and limited investigation of human rights accusations. Immediately after his 2002 inauguration President Uribe declared a “state of internal commotion” which greatly expanded military authority. A 2003 antiterrorist bill legally allowed the military to intercept communications, search private property, and arrest civilians without warrants.

Throughout Plan Colombia the military used the paramilitaries to conduct operations akin to “dirty war” tactics reminiscent of the right wing death squads active throughout Latin America from the 1960s to the 1980s. Murder, torture, and disappearances of anyone suspected of being connected to the guerrillas were common. A program that rewarded the capture or killing of guerrillas led to the murder of innocent civilians, their corpses subsequently dressed in guerrilla uniforms. According to the UN High Commissioner for Human Rights some 3,000 innocent civilians were killed as such “false positives” between 2004 and 2008.

Another success claimed by Plan Colombia adherents was the 2006 demobilization of the AUC. While several AUC leaders were extradited to the US, many former members regrouped in what are now known as BACRIM (Bandas Criminales) such as the Rastrojos and the Urabeños. These have been terrorizing Colombian cities like Cali and Buenaventura in recent years with violence, torture and murder.

Plan Colombia was successful in stimulating the Colombian economy. Inflation and unemployment rates dropped and foreign direct investment jumped, mainly as a consequence of a Free Trade Agreement with the US. However, the poor in Colombia, and particularly those relying on agriculture, suddenly faced increased competition, while income inequality increased.

The situation in the Northern Triangle is quite different. But what Plan Central America has in common with Plan Colombia is its emphasis on military training and aid. Just as in Colombia, effective accountability and monitoring mechanisms over the Salvadoran, Guatemalan, and Honduran security forces are inadequate. And their human rights records are appalling.

In Honduras, newly elected President Hernandez faces various allegations of corruption and the security forces stand accused of involvement in numerous human rights violations. Hernandez’ presidential campaign was accused of voter intimidation and during the run-up to the elections over thirty political opponents and activists were murdered. Last November a young woman was allegedly kidnapped from a bus stand and subsequently gang-raped by eight members of the newly established military police, created to address the high levels of corruption within the Honduran security forces. It is telling that the national director of police is a former death squad leader.

Similarly in Guatemala and El Salvador strong links exist between organized crime and the security forces that often go back to both countries’ civil wars, massacres and death squads. Human Rights Watch reported that police in Guatemala in recent years attempted to curb gang activity by reverting to extrajudicial, “social cleansing” killings to eliminate suspected gang members. Although in Guatemala accountability for past atrocities has improved, the police routinely violently repress anti-mining protests while attacks on journalists and trade unionists are common. In El Salvador anti-terrorist laws have been used by security forces to harass government opponents.

The US is financially supporting Colombian marines to provide military training in the Northern Triangle. This means the Colombian military, itself accused of widespread human rights violations, will likely teach techniques and tactics that often have had horrific consequences for local populations.

Plan Central America is at best a well-intentioned but naïve attempt to improve the security situation in the Northern Triangle. Particularly in Honduras it seems probable that any aid or training will be used not only against criminals but also against innocent civilians. As it always has done, Washington conveniently turns a blind eye to such issues and seems more concerned with supporting Latin American governments in line with its neoliberal free market ideology. Just as Colombia fit that profile in 1999, so do the countries of the Northern Triangle now. It is no coincidence that Nicaragua, with a leftist government, is not part of Biden’s aid proposal.

Mexico’s Mérida Initiative also opened the door to heavy US financial and military aid, but no one argues this “Plan Mexico” has managed to restore security in the US’s direct southern neighbor. Like Colombia and Mexico, Plan Central America will undoubtedly benefit the region’s business elite thanks to investor protections to stimulate business. However, for the majority of the population, an escalation of violence and corruption is a more likely outcome than Biden’s promise that Central America will be the “next great success story of the Western Hemisphere”.

Quintijn Kat is PhD candidate at the Institute of the Americas, University College London and a Senior Research Associate with the Jindal School of International Affairs, O.P. Jindal Global University