The new Macri government in Argentina has embarked on a rapid-fire series of conservative economic reforms, threatening public sector employment and social programs. 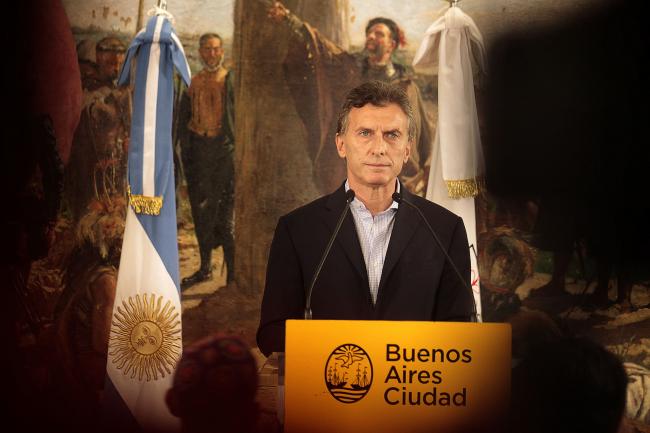 Since taking office on December 10, Argentina’s new president Mauricio Macri has moved at a hurried pace to overhaul twelve years of progressive economic and social policies implemented by the successive Néstor and Cristina Kirchner governments.

In his first two weeks, and governing by “emergency” decree, Macri lifted currency controls—devaluing the peso by 30 percent—passed a decree seeking approval from Congress to slash education spending by half, and attacked the hard-won Broadcast Media Law that limited media concentration. He also eliminated the Kirchners’ agricultural export taxes, removed a series of electric and gas subsidies, and shut down the popular Kirchnerist television talk show 678. Though many conservatives heralded the changes, the country’s social movements have responded with outcry and protest.

Following Argentina’s break with the International Monetary Fund (IMF) in 2002 as part of its strategy to pursue policy options going against the “Washington Consensus” neoliberal framework, the Kirchner governments followed a Keynesian model of economic growth, protecting national industries and boosting internal consumption in order to stimulate the economy. From 2002 to 2011, Argentina achieved the fastest economic growth in the Western Hemisphere.

Macri’s government, much more allied with the business community and a myriad of international corporations, is now racing back toward a free market-oriented model aimed at attracting foreign investment while reducing state spending and implementing austerity measures. Such contractionary policies have often slowed economic growth and prolonged recessions in developing economies.

Though many economists agree a currency adjustment was necessary to correct for years of the peso being held artificially strong and to curb falling reserves in the Central Bank, the sharp peso devaluation on Macri’s second day in office led to an immediate fall in purchasing power for Argentine consumers. This was something the Kirchner economic model had worked to prevent by regularly increasing salaries and pensions to keep up with rising prices. Analysts have speculated that Macri—unlikely to successfully curb high inflation rates in the coming months—will probably end these pay increases, further eroding consumer purchasing power and most directly affecting the poor and working class. Additionally, the devaluation and a hike in utility prices have led to an increase in the cost of living and a fall in disposable income, sapping the ability of many to participate in the economy through business ventures or discretionary spending.

To the dismay of many, Macri began the New Year by ordering thousands of public sector layoffs across the country—14,000 by mid-January—with anywhere between 60,000–200,000 more projected for the coming months. His opponents have protested, claiming that the layoffs are a form of political persecution, with Kirchnerists disproportionately targeted. Reminiscent of the Argentina of the 1990s, those who have taken to the streets to oppose the layoffs have been met with riot police, tear gas, rubber bullets and water cannons. One widely circulated photograph shows a public employee’s back completely bloodied from rubber bullets.

Some analysts argue that the layoffs are being used to lower salaries and wages overall, with higher unemployment levels serving to pressure wages downward. This would be to the benefit of the economic elite and corporate supporters of Macri’s government who foresee greater investment in Argentina if wages are sufficiently lowered—or made “competitive.” Indeed, Cristina Kirchner’s former minister of economy, Axel Kicillof, maintains that the policy is purposely designed to “convert Argentina into a country with a very cheap workforce.”

Others who will suffer from Macri’s massive lay-off plan include thousands of women and transgender victims of domestic violence who get free prenatal and infant care and other important services from free community health centers. With all of their employees laid off, some centers have been shut down entirely. Meanwhile, Kirchner-era grain and beef export taxes, which had fed state coffers and provided funding to social programs and public services, have also been cut in a lackluster attempt to appease farmers by triggering a rise in grain sales while boosting Central Bank revenue.

Those who stand to profit from these new policies include many in Macri’s inner circle. He has stacked his cabinet with businessmen and former CEOs, and at the provincial level, the new minister of agriculture for Buenos Aires Province—now also governed by Macri’s party—is a former regional manager for Monsanto. The media has reported that since the election, the sale of Monsanto products like GMO corn seeds and herbicides have jumped. Questions of conflict of interest, though, do not seem to concern Macri, who seems intent on bringing a new "managerial ethos" to Argentina. Other corporate executives whom he has appointed to cabinet positions have had close business relationships with his family, who themselves are often criticized for having greatly profited from ventures during the 1976-1983 dictatorship. If government policy is going to have the same “ethos” as scandal-plagued companies like Monsanto, Shell, JP Morgan Chase, and General Motors—some of the corporations that Macri's new cabinet members have previously worked for— then it is no wonder that so many Argentines are worried for their country.

The return to a “business-oriented” economic regime under Macri will likely include returning to increased dependence on foreign creditors and the same multilateral organizations that led the country down a turbulent path to economic collapse in 2001. An important component of his business-friendly model is Macri’s vow to renew ties with the IMF and end the conflict with “vulture fund” hold-out creditors. In January, after thirteen years of Argentina’s absence, he attended the World Economic Forum in Davos, as if proudly debuting the country’s young, new economic orthodoxy to an eagerly awaiting business world.

The renewal of IMF ties has supporters of Kirchnerist economic heterodoxy worried, and for good reason. From 2003 to 2011, Néstor and Cristina Kirchner oversaw recovery from a deep recession and the largest sovereign debt default in history at the time, and subsequently—against the predictions of economists and the international finance world—an impressive economic rebound. Within three years, Argentina’s GDP returned to pre-recession levels, simultaneously increasing real wages, social spending, and employment, while lowering inequality and reducing poverty almost by half. A crucial factor in this successful rebound was Argentina’s breaking of ties with the IMF, and its release from the dictates of “Washington Consensus” policies that had run the economy into the ground in the first place. In 2008, counter-cyclical and heterodox economic policies helped Argentina weather the effects of the global downturn.

Yet there is already speculation that, due to the large debts accrued to the City of Buenos Aires when Macri was Chief of Government, creditors will decide to issue loans to Argentina only if the government implements austerity measures. The return to an economic model predicated on adherence to the constraints of IMF-mandated policies is a worrying prospect, as it would undermine Argentina’s economic sovereignty and possibly return it to dependency on foreign-induced growth.

The Left as Opposition, Again

Argentina’s Left solidified commitment to a number of ideals during twelve years of working within the framework of a progressive center-left government, but now it has again found itself on the outside. Unwilling to accept that over a decade of progress can revert so rapidly, Kirchnerist loyalists and other Macri opponents have protested each new blow against the previous government’s policies.

Commentators point out that since 1928, no elected non-Peronist president has completed a full term. The implication is that Argentines will not allow Macri to finish his term if he continues to pass unpopular measures. Could Macri be brought down amid burning tires, Molotov cocktails and the clamoring of pots and pans, as five other presidents were during the crisis of 2001–2002? Or might he be the first non-Peronist president to finish his term in almost a century?

Despite the unpopularity of his reforms, Macri maintains an important advantage: the economy he inherits is not the disastrous economy that the late Néstor Kirchner faced in 2003. Rather, despite inflation and slow growth in the last four years, Argentina has had a relatively well-functioning and independent economy, allowing many to live well and to even thrive. The general stability that passed on to Macri allows him more flexibility to enact unfavorable economic policies. Today, the public has growing confidence in institutions that during the 2001 crisis were completely delegitimized.

Similarly, the difference between protests now and those during the recession and crisis of 2001–2002 is that the latter were preceded by the complete delegitimization of institutions and the politicians who ran them. The Kirchner government’s decline in support has been nowhere near the lack of public confidence that led people to chant “que se vayan todos!” fourteen years ago. Instead, confidence in the state and its role in society has increased since 2001, as support for the Kirchners’ policies—sometimes even within macrismo—has also shown. Each of these factors increases the likelihood that Macri’s government will maintain stability.

If the violent repression of protestors or the recent detention of Tupac Amaru leader Milagro Sala is any indication of what may come, then social movement organizations should brace themselves. The criminalization of protest and the persecution of social activism—as some describe Macri’s actions—seem consistent with Macri’s resolve to “remove ideology” from government politics. Margaret Thatcher’s neoliberal dictum that “there is no such thing as society” comes to mind in this context of renewed mass protests — and police violence —on the streets of Argentina.

But the Argentine Left is not easily deterred. For social movement organizations, Kirchnerist groups, labor unions and more radical organizations, the key is to continue to organize. “The social movement groups have learned a lot in the last fifteen years,” says Ezequiel Arneodo, a member of the socialist-oriented organization Patria Grande, which has roots in the social explosions of 2001–2002. “We gained new legislative spaces in Congress and local governance that we never had before, and have learned to use them. Now it’s time to build again, even if it is from the outside.”