The focus of the summer 2016 NACLA Report on the Americas, this forum reflects on the connection between drug war violence and global capital interests as analyzed in Dawn Paley's book Drug War Capitalism. 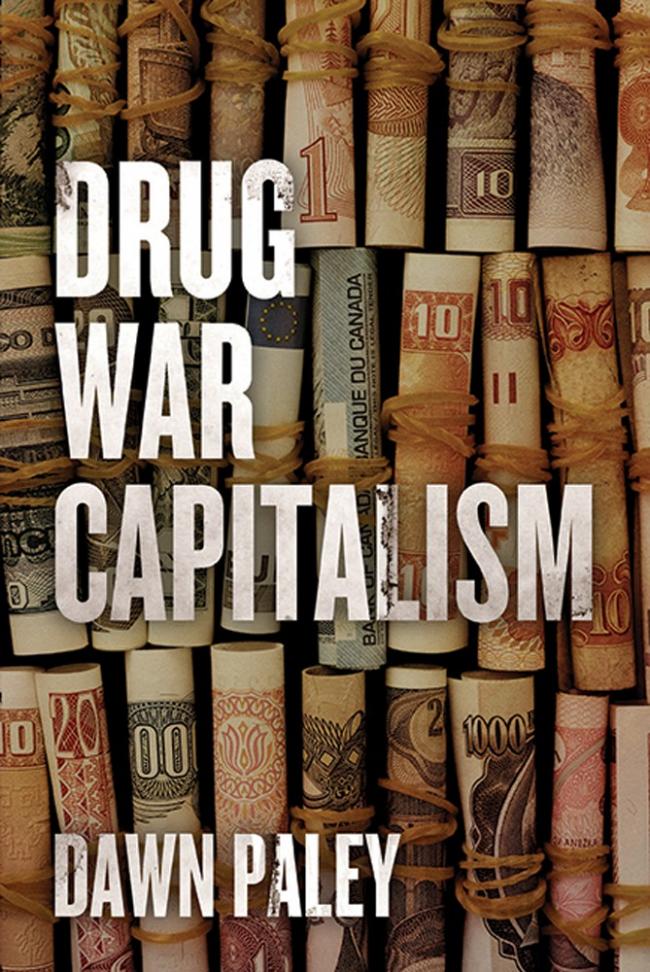 As a recent NACLA Report (“Reimagining Drug Policy in the Americas,” Summer 2014), made clear, the international tide on drug control policy is beginning to turn. While the United Nations General Assembly Special Session on the World Drug Problem (UNGASS) this past April fell short of reformers’ expectations, it was accompanied by a high-profile call for rethinking the so-called “war on drugs” by current and former Latin American heads of state. But even as a general consensus has emerged that the U.S.–led war on drugs has failed by its own standards—many illegal drugs are cheaper, stronger, and more plentiful now than ever before—much of the debate continues to avoid the underlying economic factors that keep not only the drug trade itself, but also the militarized war against it, going strong. Dawn Paley’s remarkable book Drug War Capitalism (AK Press, 2014) tackles this question head on, carefully examining the relationship between the war on drugs and the expansion of global capitalism throughout the hemisphere.

Paley’s argument is that the U.S.–funded war on drugs has, as she puts it, “bolstered a war strategy that ensures transnational corporations access to resources through dispossession and terror." Drawing on the work of geographers like Melissa Wright and David Harvey, Paley sees the drug war as a strategy of “accumulation by dispossession,” a process of enclosure through violence that redistributes resources to transnational investors, particularly in extractive industries like mining and petroleum. In her conception, the war between state militaries and paramilitarized drug-trafficking organizations works to terrorize poor and working people, dispossessing them of land and access to resources, restricting their mobility, and foreclosing their ability to organize resistance. In so doing, the war on drugs emerges as a “long-term fix to capitalism’s woes,” in Paley’s words, allowing transnational capitalist firms to penetrate previously inaccessible or unavailable territory and establish new enterprises in finance, real estate development, manufacturing, agribusiness, and extraction.

This argument raises many new questions for scholars of the capitalist state. Are the drug traffickers themselves, the billionaire kingpins and their complex and diversified organizations, part of this transnational capitalist class? How do we understand not only the illicit accumulation of drug capital but also its lubricating effects on the larger economy? And how do we characterize the role that this capital and its masters play in shaping state policy? The intricate web of connections—between a hegemonic U.S. state, its more or less dependent Latin American counterparts, the supposedly licit transnational capitalist class, and the underground and illicit capitalists who oversee drug trafficking and related activities outside the bounds of the law—have made more complex the relationship of state to capital in the context of the war on drugs. But in much the same way that powerful fractions of the capitalist class have long used financial and fiscal mechanisms to shape the state in their favor, illicit capitalists can also use the threat or deployment of bodily violence (kidnapping, extortion, assassination of government officials) to foreclose what theorists have called the “relative autonomy” of Latin American states—that is, their ability to operate independently of illicit capitalist interests. This takes on the form we understand as corruption: if drug traffickers can’t openly bend the legal, financial, or fiscal mechanisms of the state in their favor (as financial, telecommunications, or mining interests might), they can certainly bend the practices of state power to their will, as we have seen, for example, in Mexico. This forum challenges us to try to understand how the various competing and overlapping interests of licit and illicit capital are shaping the neoliberal state in Mexico, as well as how the extra-legal use of force is changing the practices of transnational capital vis-à-vis both the state and the working people of Latin America.

As Paley and the participants in this forum demonstrate, however, one thing is very clear: the overarching logic of the drug war has almost universally served the interests of transnational capital, which, as William Robinson details, is rooted in and backed by the U.S. but organized into cross-border processes of production. To the wide swaths of working people who are pressed into labor—legal and illegal, regulated and unregulated, formal and informal—in the service of capital accumulation, it has mattered little whether the boss spent his days in a boardroom or a hideout. As Gladys Tzul Tzul reminds us here, the violence and dispossession of the drug war are in many ways a continuation of earlier Cold-War processes in which the resistance of indigenous poor people in Guatemala to capitalist social relations was met with almost inconceivable violence. And, as John Gibler’s contribution demonstrates, in this context, violence can actually become an industry, where death itself is the mass-produced, and gruesomely profitable, product. For the poor, indigenous, Afrodescendant, and working people of the Latin American countries that have become the object of the U.S.–led war on drugs over the last decades, the particular configuration of forces that has marked their incorporation into capitalist globalization has brought untold violence, displacement, and death. This is, as these contributions demonstrate, the currency of drug war capitalism.

For open access to the rest of the forum, including contributions by William I. Robinson, John Gilber, Gladys Tzul Tzul and Dawn Paley, please click here.

Christy Thornton is an assistant professor of history at Rowan University. A former executive director of NACLA, she currently serves on NACLA’s editorial committee and its Board of Directors.