Rural communities and environmental activists in Honduras, Guatemala, Nicaragua, and El Salvador unite to create a new front of resistance against mining projects across the region. 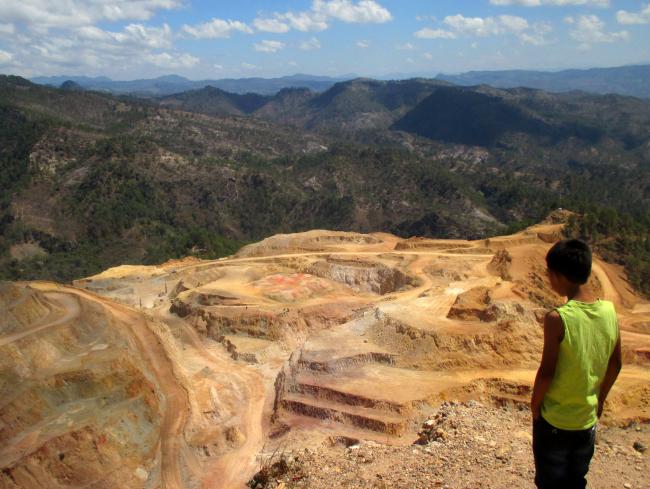 Miguel López took cover in the shade at the entrance to the hilltop cemetery. It was approaching noon in the mountains of western Honduras, and the sun beat down on the Azacualpa Environmental Committee members gathered to discuss their ongoing battle with Aura Minerals, a Canadian mining company. Located within a community land title (ejido) that goes back nearly two hundred years, the cemetery is on the chopping block of the company's San Andrés mine.

The sound of beeping trucks and machinery drifted from the gold mine below. A bit further on, the road began to parallel the edge of the open pit. According to López, the president of the Azacualpa community-based environmental group, communities were forced to relocate in the  late 1990s by Greenstone, the first of three Toronto-based companies to own the mine.

“They got rid of a community,” he said of San Andrés. The residents had to move to the other side of the open pit operations. “They relocated everyone.”

Alongside the pit, a small group of houses inhabited by San Miguel community residents who refused to leave are now perched disturbingly close to cyan-colored ponds gathering sodium cyanide solution and gold leached from the heaps of earth and rock blasted from mountainsides. López added that a number of bodies were exhumed from a cemetery there without community consent.

López doesn't want history to repeat itself in Azacualpa.

Earlier this year, El Salvador enacted a historic ban on all metal mining in the country. But communities in neighboring Honduras, Guatemala, and Nicaragua continue to battle existing and potential mining projects. In an effort to bring together and leverage these struggles, representatives from organizations and communities in all four countries met in Nicaragua last month to forge a new Central American Alliance Against Mining (ACAFREMIN).

“This is a struggle of the whole Central American region,” Javier Mejía, natural resources coordinator at the Centro Humboldt, a Nicaraguan environmental and development center, said at the opening of the regional event, held in Managua April 27 and 28. 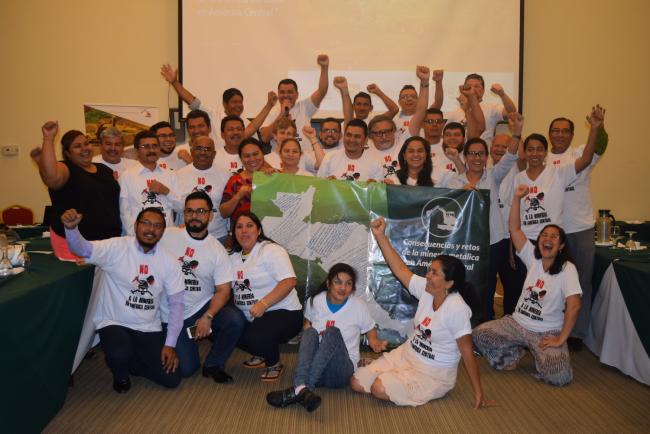 All four countries have faced a new wave of mining in the past 25 years, said Pedro Landa of the Reflection, Research and Communication Team (ERIC), a Honduran organization founded by Jesuits in 1980. During the 1980s and 90s, in a context of extreme poverty and armed conflicts, the World Bank and other international actors began promoting mining as a development solution, said Landa. Reforming legislation was part of that promotion.

“A race began in Central America to reform [mining] laws,” he said. The laws kept royalties down to as low as one percent, prioritized foreign investment over environmental regulations, and disregarded potential community concerns and opposition. This included El Salvador’s new mining law in 1996, Guatemala’s in 1997, the year following the peace accords that ended a 36-year armed conflict. Honduras passed a a new mining law in 1998, the month after Hurricane Mitch, when large areas of the country were still underwater and in a state of emergency. In Nicaragua, the Special Law for the Exploration and Exploitation of Mines came into effect in 2002.

Although Honduras, Guatemala, and now El Salvador have since passed newer legislation, these laws set off a wave of new mining projects in the region. Twenty years later, the region is facing the negative impacts of those projects, said Landa. These include pollution, ecosystem destruction, water scarcity, health problems, and community divisions. But mining is also often linked to violence. Honduras, for example, is one of the most dangerous countries in the world for environmental defenders, according to the London-based NGO Global Witness, Landa pointed out.

“Extractivism is a new low intensity war,” he said. He explained that although it is a conflict that can seem invisible to the broader public, within the communities, its consequences abound. 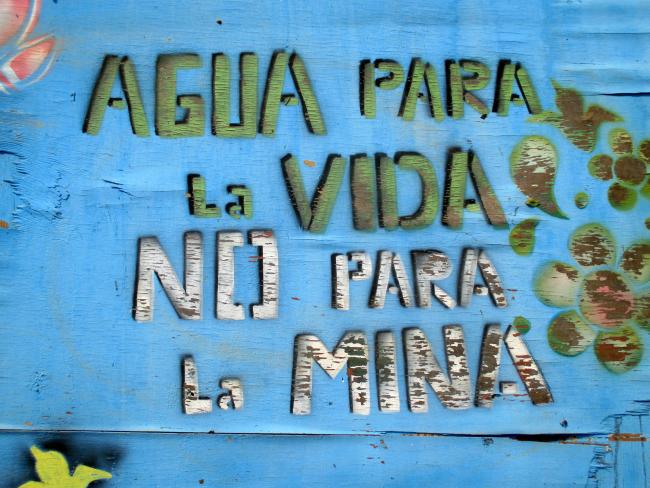 Bordering Mexico in the western highlands of Guatemala, the Huehuetenango department has been home to intense community struggles over mining and hydro-electric dam projects. Indigenous activists have been killed, and community leaders have been detained on and off for years on a variety of charges of which they are nearly invariably acquitted.

“[The abuses don’t] stop the struggle. On the contrary, the struggle has expanded in Guatemala,” said Rubén Herrera, coordinator of the Departmental Assembly of Huehuetenango in Defense of Territory (ADH).

Herrera himself has spent time behind bars on charges related to community struggles in Santa Cruz Barillas, in the northern part of the department. Last December, Hidro Santa Cruz, the company behind the fiercely contested Canbalam dam project in the municipality, announced that it was leaving the country, but criminalization of those who protested the project continues. Herrera is one of many Huehuetenango activists with pending arrest warrants. Whether  dams or mining – and many activists link the two due to the high electricity and water demands of the latter – the story is similar, participants at the Managua event emphasized.

“We have a permanent history of resistance and struggle,” said Herrera. “The only path for us is to continue the struggle.”

In Nicaragua, struggles and conflicts continue in gold mining areas in Santo Domingo, Limón, and Bonanza, along with opposition to exploration and concessions elsewhere. As in Guatemala and Honduras, community leaders and others confronting mining on the ground in Nicaragua frequently face threats, intimidation, police repression, and criminal charges.

Organizations and communities dealing with mining in Honduras, Guatemala, and El Salvador have coordinated and worked together for years, whereas their counterparts in Nicaragua have largely been facing the situation alone. ACAFREMIN hopes to change that, and many participants in the new alliance are taking notes from the communities and social movement organizations in El Salvador whose efforts resulted in the national ban on metals mining passed March 29.

The mining ban doesn’t mean the struggle is over, though, Salvadoran activists and analysts said at the event in Managua a month after their legislators unanimously voted to ban metal mining. The specific regulations still need to be passed, and the ban could potentially face a legal challenge, said Rodolfo Calles, a member of the Salvadoran Ecological Unit (UNES). Nonetheless, the mining ban, the first of its kind in the world, is a testament to the unrelenting grassroots struggle around the country.

“It’s been the fruit of more than 12 years of struggle,” said Calles. “The protagonists in all of this have been the communities.”

Sandra Cuffe is a freelance journalist based in Central America, where she covers environmental, indigenous, and human rights issues. You can find her on twitter at @Sandra_Cuffe or read more of her work on her website at sandracuffe.com.