A recent photograph circulating of a Haitian senator shooting an AP reporter is just the tip of the iceberg in Haiti, where an uprising has been simmering for months. 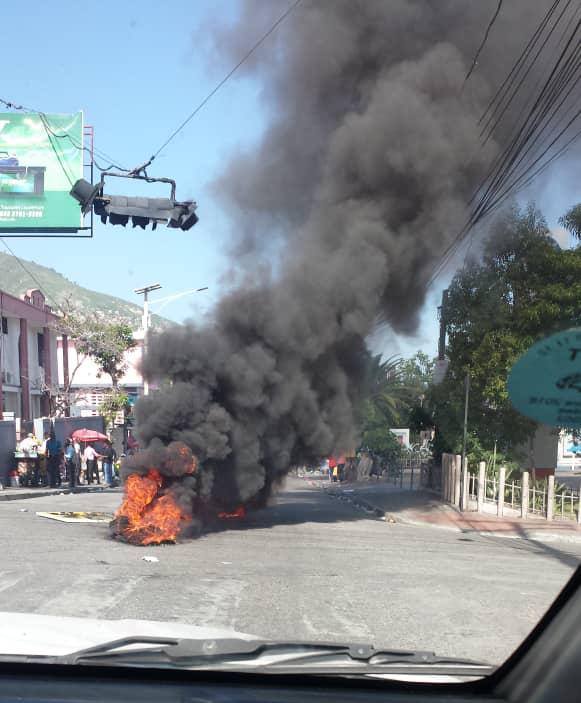 An Associated Press photographer and a security guard were both injured when a Haitian senator pulled out a gun and started firing outside the parliament this week. Suddenly news outlets around the world remembered Haiti. The “if it bleeds it leads” adage was proven right once again.

But the Haitian people have been bleeding for years now.

The shooting was just one more incident in a crisis that arguably began long before President Jovenel Moïse took office in February 2017. The only notable difference on September 23 was that the victim worked for a foreign news agency.

Haitian journalists, demonstrators and bystanders have been shot, beaten, and arrested in the capital during the 14 months of on-again, off-again anti-government protests that have wracked the country. But in August, a three-week gasoline shortage—caused because the government, which purchases gas on behalf of distributors, owes suppliers $100 million—led to outrage.

Since September 16, the capital of Port-au-Prince has been mostly “locked down”—in Creole, the saying is lòk—with schools, banks, and businesses mostly closed. Cars, trucks, and motorcycle taxis seeking gas blocked roads, angry crowds pelted drivers with rocks, and protestors blocked streets with burning tires or some of the tons of uncollected garbage lining most of the city streets. Alterpresse reported that at least five people, including a young man shot in the neck by police officers, were killed in protest-related incidents during the first three days of that week alone.

Some gas has been delivered, but protests have continued, with attacks on politicians and ministers almost commonplace. The senator who shot up the yard outside parliament, Jean-Marie Ralph Fethière, claimed he pulled out his pistol because he was being rushed by opposition protesters. Since then, angry crowds have allegedly torched the clinic of another senator and carjacked a government minister’s vehicle as she left a swank hotel in the hills above the capital.

And last week, hundreds of protesters sacked the office of the deputy representing the port city of St. Marc, denouncing the country’s 19 percent inflation and generalized corruption, as well as demanding the president step down. They dragged furniture, a file cabinet, and papers into the street and torched them.

The country has been in a state of almost constant upheaval—or more accurately, “uprising”—for over a year. Starting in July 2018 thousands have repeatedly marched in the capital and in many smaller cities to demand the president step down.

Originally sparked by the government’s announcement that it was going to cease subsidizing gas and diesel and thus add to the already-crushing poverty, angry marchers soon also focused on a massive corruption scandal involving members of the previous and current government, including the president.

Journalists, human rights groups, and a state auditing body have all issued hundreds of pages of reports documenting how up to $2 billion from the Venezuelan fuel assistance program PetroCaribe has been diverted into politicians’ pockets. Fed up with the corruption, in the summer of 2018, first one activist and then hundreds and then thousands began to protest, hold press conferences, and organize against the government as part of what has become known as the “PetroChallenger” movement.

Listening to news radio in the capital, it appears that PetroCaribe money is not the only illicit cash circulating, among parliamentarians at least. Every day on the air, elected officials sling accusations of kickbacks and graft at one another. More recently, several senators even admitted to taking $100,000 bribes in exchange for a “yes” vote to approve the president’s proposed prime minister, Fritz-William Michel, who is also among the accused. Last week a coalition of human rights groups published a list of Michel’s agriculture and fisheries projects and claimed he was at “the head of a corruption machine.”

Even the staid Chamber of Commerce of the West—which represents businesses in the capital region and typically measures its words so as not to impact its members’ profits—recently denounced the president and other officials, albeit cryptically. In a note published on September 13, the Chamber said it was “alarmed” at the “ineptitude” of the president, various prime ministers, ministers, and parliamentarians in their “use public funds in an ‘unusual manner’” while they “leave the population to fend for itself.”

The recent gas shortage further escalated the ongoing protests. The desperate situation also caused at least two deaths: a motorcycle driver and his female companion, transporting a container full of gasoline on the bike, were burned to death after colliding with a truck. The morbid video, which showed a blackened dead man and a dying, writhing woman, circulated on WhatsApp for hours accompanied by comments all asking a variation of “What’s next?” 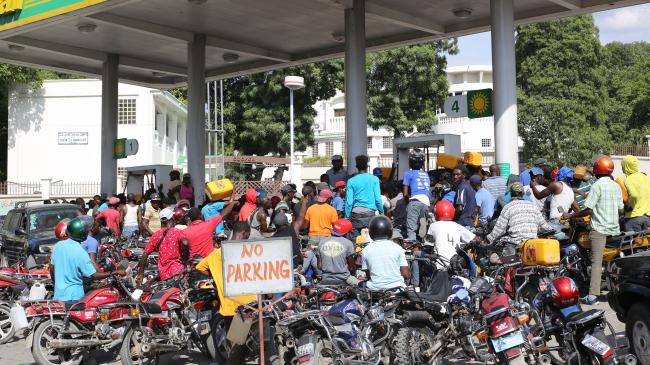 So, when a majority party senator pulled out a pistol and started firing earlier this week, it was nothing but the latest chapter in the drama.

After a month of silence, President Moïse finally addressed the nation on September 25, two days after the shooting. But he did so at 2 AM, when almost everyone is asleep—not to mention when few have electricity. In his 15-minute address, Moïse called for a “truce” and “government of national unity,” but offered nothing else that would address the multifaceted crisis, nor did he appear ready to step down.

And so, as soon as the sun came up, so did the barricades. Port-au-Prince was lòk again.

Haiti has seen its share of upheaval, but never a president who lasted this long in the face of such dire conditions, according to Haitian human rights advocate Marie Yolène Gilles.

“At my age, I’ve seen a lot of crises,” Gilles, 59, explained. “This is the worst I have ever seen. This is the first time I’ve seen a completely ungoverned country. All of the state institutions are sick.”

The director of the human rights advocacy group Je Klere Foundation, Gilles is no stranger to political unrest, violent coups d’états, and foreign occupations. A former journalist, she remembers the end of the Duvalier dictatorship in 1986, the fall of interim governments, and two coups against Haiti’s first democratically elected president, Jean-Bertrand Aristide, in 1991 and 2004.

Like many Haitians, she blames the United States, which has been implicated in Haitian politics and in propping up or helping bring down governments in Port-au-Prince since the 19-year occupation by U.S. Marines beginning in 1915.

Last January at the Organization of American States, Haiti voted with the U.S. against its longtime former benefactor, Venezuela’s Nicolás Maduro. The resolution said the body did not recognize the Maduro government, noting it was concerned “about the worsening political, economic, social and humanitarian crisis” and “the breakdown of democratic order and serious human rights violations.” It was part of a gambit to legitimize opposition leader Juan Guaidó's claim to power.

The vote was a quid pro quo, according to Gilles.

“The U.S. is supporting Moïse because of the vote against Venezuela,” she noted.

Whether or not the vote is a main reason, it is clear to any Haiti observer that Moïse—who came to power in races where only about 21 percent of the population even bothered voting —has remained in office only because of the support of Washington and its partners.

And, not surprisingly, the U.S.-dominated OAS has yet to meet officially about the Haitian crisis —although there was a secretive and unofficial U.S.-led trip—even though conditions on the ground are pretty close to the circumstances decried in the January resolution on Venezuela.

Haiti is clearly in the midst of a “breakdown of democratic order” and “humanitarian crisis.”

More than half the population is “chronically food insecure and 22 percent of children chronically malnourished,” according to the World Food Program. Institutions like the judicial system and public hospitals are barely functional. The National Police has been accused in connection with numerous cases of brutality, including the the November 2018 “La Saline Massacre,” which included multiple rapes and the torture and murder of at least 12 people. And the word “chaos” appears in more and more news stories.

Washington is the “Bwa Bannan”

Photographer Georges Harry Rouzier, 35, has been following the PetroChallenger movement. He said that he and his generation, who came of age around after the devastating January 2010 earthquake, used to have hope for the future, especially when they heard all the reconstruction-related promises from foreign donors.

“We thought we were on the verge of a new era,” he remembered. “It would be a new start.”

Ten years later, with parts of the capital in worse shape than they were after the diaster that killed tens of thousands, and after months of protests and denunciations have brought no change, he is fed up.

“So long as we have parliamentarians who are only looking out for their own interests, the country will not advance,” Rouzier said. “We have bad policies and we have politicians who play on the population’s ignorance and who are in power just to make as much money as they can.”

“How can anyone look at our situation and not see the misery in the streets?” he asked. “It’s clear—they wanted Maduro to fall but they want [Moïse] to stay in power.”

During his presidential campaign, Moïse was known as Nèg Banann or “The Banana Man,” because he headed a banana export business, also implicated in the PetroCaribe scandal.

As any banana grower in Haiti knows, every banana tree needs a bwa banann—a piece of wood holding the tree up as it gets heavy with fruit.

“Nobody supports Moïse—not the people. He came to power without popular support,” Rouzier said. “But he has the U.S. as his bwa banann, so he stays in power.”

Jane Regan is award-winning investigative journalist, documentary filmmaker, and community and alternative media scholar. She co-launched and then served as coordinator and executive editor of three community- and student-based newsrooms: one in Somerville, Mass., and two in Haiti, where she lived and worked for almost half of her 35-year career. She has held full-time teaching positions at Salem State University and Boston University and has also worked for numerous outlets including PBS, BBC, Miami Herald, Associated Press, Reuters, Latinamerica Press and Inter Press Service. Regan was the co-recipient of NACLA's Samuel Chavkin Prize for Integrity in Latin American Journalism in 2004. http://www.janevregan.org