In the age of COVID-19, anything other than ending deportations is a high-risk, potentially disastrous move. 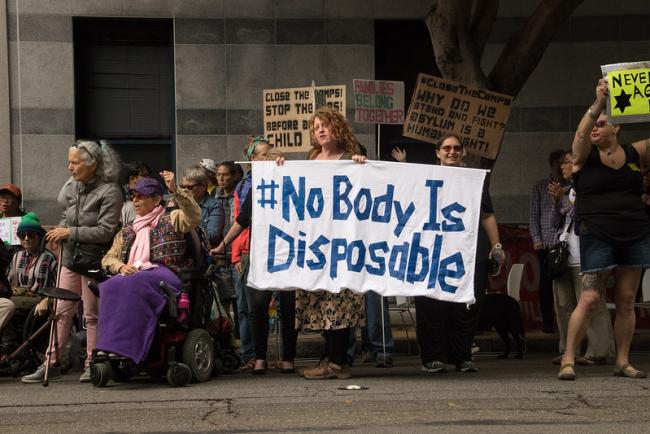 Despite the heightened lockdown of Central American countries due to the novel coronavirus, returned migrants and asylum-seekers are still being funneled through the expulsion system from the United States and Mexico back to their countries of origin.

In El Salvador, Guatemala, and Honduras, after Presidents Nayib Bukele, Alejandro Giammattei, and Juan Orlando Hernández restricted travel and transformed their countries into partial or total quarantines to curtail the spread of COVID-19, the United States continued deporting people. From those currently facing deportation proceedings in U.S. courts to immigration authorities still arresting people throughout the country to house them in prison-like detention centers, the deportation machinery is still operating as usual, though increasingly at reduced capacity due to viral spread. Activists, epidemiologists, and politicians warn that the pandemic will spread in detention centers just as it has in prisons like Rikers Island, which might subsequently make deportations themselves a vector for coronavirus. This week, a detainee at a New Jersey detention center tested positive for the novel coronavirus. John Sandweg, the former acting director of ICE under Obama, has also called for the release of nonviolent detainees.

Last week, El Salvador followed Guatemala’s lead in ceasing to receive deportation flights. Flights to Honduras had already effectively stopped as authorities halted all air travel. Guatemala backtracked just days later, agreeing to continue to receive deported Guatemalans, but not other nationals under its asylum cooperation agreement with the United States. Flights to Guatemala, El Salvador, and Honduras continued after the United States finally recognized the threat of COVID-19 within its borders—some weeks after Trump dismissed its existence as a hoax and downplayed its severity as a “Chinese problem”—despite these countries having few to zero confirmed cases of the virus at that time. In a deportee flight returning from Miami on March 10, Guatemala confronted its first coronavirus scare, later dismissed as the flu. As of writing, Guatemala now has 24 confirmed cases, a count that is sure to increase.

Despite recommendations to avoid all nonessential travel to control the spread of the virus, Immigration and Customs enforcement has indicated deportation flights will continue, with an added step of temperature and visual screening. “Any detainee with a temperature of 100.4 degrees or higher will be immediately referred to a medical provider for further evaluation and observation,” according to the agency. ICE has indicated it will “exercise discretion” in its enforcement and removal operations amid the coronavirus pandemic. These efforts are, of course, unreliable as infected persons may appear asymptomatic or may exhibit symptoms much later during the deportation process. In the age of COVID-19, anything other than ending deportations is a high-risk and potentially disastrous move.

The recent—if temporary—ending of all U.S. deportation flights to El Salvador and deportations of Hondurans and Salvadorans to Guatemala appears to press pause on the entire so-called Safe Third Country or Asylum Cooperative Agreement scheme. The agreement allows the United States to return any asylum-seekers who stepped foot in Guatemala back to the country, ostensibly to request asylum. A similar agreement had been set to take effect in El Salvador “any day,” according to Customs and Border Protection. Now, the suspension exposes the weaknesses of an unstable treaty that quickly overwhelmed Guatemala and its ability to effectively process air and land entry amid the pandemic. In El Salvador, where improvised quarantines quickly garnered criticism for violating human rights due to overcrowding and mismanagement, Bukele soon followed suit and stopped deportation flights from the United States and Mexico. Juan Orlando Hernández’s Honduras, too, did not welcome any deportation flights the week of March 16 as the country’s airports are not currently accepting international traffic nor receiving deportees from Mexico by land. Since then, Honduras, Guatemala, and El Salvador have also implemented curfews and restricted everyday mobility.

Like in other countries of Latin America, the travel bans that Guatemala, El Salvador, and Honduras implemented were first directed at regular travelers and tourists. These countries have since denied entry of all non-essential travelers and suspended flights from Level 3 countries such as China, Italy, and Spain. Central American nationals, however, were at first allowed to return, only to be placed in mandatory quarantine for eventual release into the country, although this is no longer the case. In El Salvador, for example, deportees—roughly 213 according to March 17 figures—were put into separate quarantines to house them away from regular, non-criminal travelers. As an added measure, President Bukele announced that to ensure safety and prevent the overwhelming of hospitals and customs, he has forbidden all non-humanitarian or cargo air traffic from landing in the country.

Curiously, those same deportation flights temporarily halted in Guatemala have restarted once again, demonstrating that there are ongoing negotiations with the U.S. government on how to proceed with business as usual. Some have already drawn attention to this as an example of the U.S. strong-arming Central American nations. Honduras remains steadfast to its line from March 10, when it halted all repatriation flights to the country due to the lack of isolation space to process deportees and carry out COVID-19 testing—though as of March 22, Honduras appears to have accepted at least one deportee flight. In El Salvador, like in neighboring nations, the deportee situation remains riddled with conflicting information. It is still unclear if U.S. deportation flights will stop entirely, as the U.S. Embassy in San Salvador claims they will continue. ICE stated that the agency will temporarily postpone most arrests, though aggressive practices have suggested little change. As of March 20, President Bukele has halted all deportee flights to El Salvador until further notice—though it is now clear this did not hold for very long as El Salvador received an ICE flight on March 24 under the pretext that return flights from El Salvador and Honduras would be used to evacuate U.S. citizens. Within days of declarations otherwise, Guatemala was swiftly pressed to resume its scheduled flights, Honduras took in deportees on March 22, and El Salvador’s quarantine was all but trespassed to fulfill U.S. deportation imperatives. At present, Mexico too continues serving as Trump’s wall and has not hesitated to receive Central American deportees via expedited removal agreements that place many in squalid encampments vulnerable to coronavirus infection.

The outbreak narrative—that of a coming rapid “surge” of COVID-19 cases that overwhelmed first world health services and left thousands dead—remains politically useful for governments to demonstrate control over the disease and to guide the level of panic in Central American populations, while at the same time amassing useful political capital as a national savior for after the pandemic subsides. The unknown duration of the pandemic makes the act of doing politics a delicate balancing act. Quickly released reports and conflicting information demonstrate the deficiencies of an institutional and legal procedure ill-equipped to respond to accelerated emergency conditions. It also reveals a recurring script of U.S.-Central American relations, where the United States can exert immense pressure to ensure that Central American nations yield to U.S. policy.

Stateside, there has been talk about an airline bailout of upwards of $50 billion as part of an unprecedented $2 trillion economic stimulus. ICE has previously used the airlines in question—United, American, Delta, which are part of the Airlines for America lobbying group—to deport people back to Central America. Statistics from January 2019 to January 2020 show that over 1,200 commercial flights from those three airlines alone were used for removal procedures. In other words, the very commercial airliners that stand to gain from the bailout also profit from deporting Central Americans. This relationship, enabled by longtime discount agreements with commercial airlines through the City Pairs Program (CPP), is part of the deportation apparatus and must be examined more closely and part of any analysis of ending deportations now and in the post-pandemic future.

COVID-19 has exposed the unsustainability of regional agreements that effectively force small, infrastructurally deficient, and poor Central American nations to do the procedural bidding of the United States to curb the encroachment of migrants and asylum-seekers, such as through Safe Third Country agreements. The pandemic has also enabled authoritarian and constitutional erosions via “state of emergency” measures to deepen inequality and violence in countries such as Honduras, itself embroiled in recurrent crises of governance. These deportation schemes, sharply increased under the Trump administration, have created a chaotic environment of institutional, administrative, and logistical complexity that complicate measures taken by Central American governments to deal with COVID-19. We should not lose sight that the U.S. has over 50,000 confirmed cases and counting, more than all of Central America combined.

As a scheme to reduce and contain Central American mobility, Safe Third Country/Asylum Cooperative Agreements have proved one-sided. They are temporarily effective for the United States to repel migrants away from its borders, but they have been terribly inefficient and burdensome to already weak public institutions in Central America. The offshoring of U.S. migratory control to Central American nations like Guatemala, for example, has made abundantly clear the sheer lack of administrative capacity to process deportees while simultaneously navigating an unfolding public health crisis. These stopgap approaches that outsource the work of case processing and granting asylum are, in short, exhausted. The inability of Central American nations to respond to an increasing number of deportees was clear even before COVID-19.

The deportation machine is being obstructed by these emergency changes to the global order, to air travel, and to the erection of “pandemic protectionism” justified by different kinds of health nativism. Bukele’s “state of exception,” too, which led to the closing of Monseñor Romero International Airport in San Salvador for only pandemic-related purposes, also complicates the administrative rhythms of U.S.-established deportation procedures in the region—though I anticipate this breaking down further as the U.S. embassy begins evacuation flights for U.S. citizens and permanent residents that remain in the region. The closing of maquila production and call centers in El Salvador also stresses these logistical dependencies by halting customer service work and production for global markets, interrupting the supply of goods and services for U.S. corporations.

Despite the intensifying crisis, the mandate to expel the undesirable Central American from the United States continues and will likely increase to pre-coronavirus levels soon, albeit with some modifications. There is an evident disjuncture and recklessness here between the politics of flight cancellations as measures for citizen protection and the unending practice of deportation that goes against all suggestions of social distancing and stopping air travel, to prevent contagion.

Deportations, as demonstrated in a recent widely circulated report from Human Rights Watch, have been shown to put people in situations of danger and existential risk. Deportees leaving U.S. detention for their home countries face significant challenges as they return to the contexts that prompted their outmigration—of course, after their now required quarantine, their multiple temperature checks, their lasting stigmatization. Now, with COVID-19 affecting Central American countries and expected to worsen, there exists an immediate viral risk associated with return, to both deportees themselves and to Central American societies as they haphazardly maneuver through the developing pandemic.