Venezuela is ill-equipped to support its population as it enforces social distancing rules. 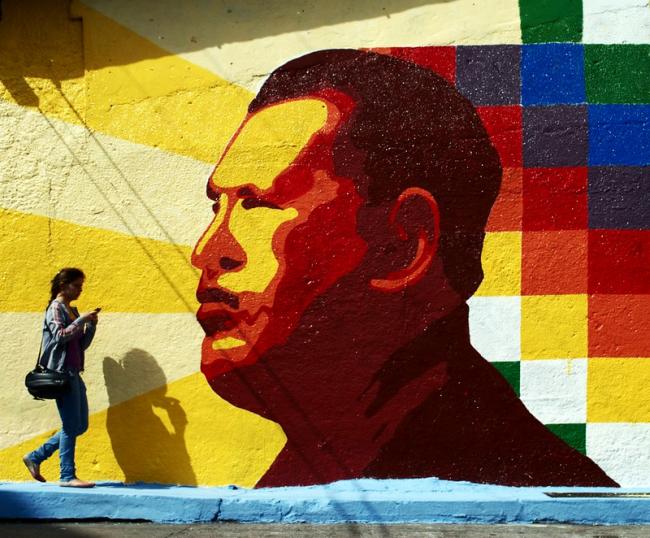 In this WhatsApp audio extract, a gang leader in Cota 905—among the most violent barrios in Caracas, known for harboring one of the city's largest criminal groups—warns residents of the consequences of violating quarantine amid a nationwide lockdown in Venezuela. In communities such as Cota 905, COVID-19 exacerbated already deep-seated inequalities, now manifested between those who can afford or have found ways to cover their faces and those who cannot, between those who can afford to stay indoors and those who must work in order to live. Without access to surgical masks, a family cannot go to supermarkets or pharmacies to buy food or medicine. For example, in Carapita, another working-class community in Caracas, neighbors pitched in to help a family unable to afford masks or food during lockdown.

Amid a worldwide pandemic and a massive downturn in oil prices, Venezuela’s longstanding humanitarian emergency, political polarization, and economic collapse have made the country uniquely vulnerable to COVID-19. Meanwhile, recent charges of narcoterrorism by the United States against Nicolás Maduro and his inner circle have increased the uncertainty around a negotiated solution. Absent robust public health systems and financial resources to support extended quarantines among the most vulnerable populations, the government of Nicolás Maduro has relied on the state security apparatus to enforce social distancing practices, in the process highlighting how Venezuelans are caught in a triple crisis: authoritarianism, coronavirus, and social disintegration.

According to the World Health Organization (WHO), wearing masks is advisable for people caring for those showing symptoms, or for anyone sneezing or coughing. Moreover, masks are most effective when accompanied by regular and vigorous hand washing. Faulty infrastructure causes frequent water shortages for Venezuelans of all social classes and especially popular sector communities where running water is irregular at best. Upwards of 25 percent of the population lacks sustained access to potable water, while 4 out of 10 households experience daily water cuts.

Moreover, the collapse of health systems and institutions to address the pandemic makes a bleak picture even more so. Writing on Venezuela, the latest report of the UN High Commissioner of Human Rights, Michelle Bachelet, details how the country’s public healthcare system is anything but affordable, as patients must often find and provide on their own all necessary medical supplies for any procedure. Moreover, low salaries and few guarantees of personal security have contributed to a massive migration of medical personnel. Freddy Pachano, head of medical graduate studies at the Universidad del Zulia, one of Venezuela’s oldest and most renowned universities, faced public threats from the state governor—flanked by military officials—for speaking out about unconfirmed COVID-19 cases. The use of State Security Forces seems to be the silver bullet for Nicolas Maduro’s government for addressing this triple crisis.

This is also the daily struggle in barrio communities where gangs and security state forces are both enforcing quarantines through social control. Two weeks ago the police unit known as FAES—the heavily armed Special Unit Forces of the National Bolivarian Police responsible for the majority of police lethality cases—arrested freelance journalist Darvinson Rojas in his own house located in el barrio of Mamera for tweeting that official reports were not showing new cases that tested positive for COVID-19, following a systematic pattern of state repression that has come to characterize this police force. According to the Monitor de Victimas, in 2019, 54.6 percent of the violent deaths in the hands of FAES occurred inside or adjacent to the victim’s homes, located in neighborhoods like the ones where Darvison and his family lives. What these kinds of responses reveal—especially against the backdrop of inadequate hospitals, insufficient medical personnel, and deficient food supplies—is that the arrival of COVID-19 in Venezuela has intensified an already violent approach to social control, whether by criminal groups or state security forces. The lack of a proper healthcare system and qualified healthcare personnel leaves Venezuela bound to police and gangs’ rules that aim to control the most vulnerable population.

As if that was not enough, oil prices have fallen precipitously amid a trade war between Russia and Saudi Arabia. As a country long dependent on oil revenues and on imports, Venezuela faces dramatic consequences. During the Chávez and Maduro governments, oil has sustained all social policy. Whenever oil prices have gone up, public spending has risen, often without clear plans or transparency. Yet even as more than 80 percent of Venezuela’s annual budget goes to public spending, one out of five citizens face food insecurity, while 87 percent of the population lives in poverty. 25 percent live under extreme poverty. Most families cannot rely on formal wages to survive. Instead, they must rely on the irregular and insufficient distribution of subsidized food by the state through programs such as CLAP.

Against the backdrop of a global economic crash and historic pandemic, Venezuela’s oil-dependent and driven system is thus especially vulnerable, made worse by two decades of mismanaged oil revenues that failed to diversify the economy or invest sustainably in health care or basic food and water infrastructure.

Karla, from el barrio La Vega, when talking to her about the quarantine, said, “People would respect staying at your house if we knew when the CLAP was going to arrive, they say every 15 days, but we have not seen it for more than 20. I had to go out the other day, putting my kids at risk, because I didn't have any money to pay for gas to cook for them.”  Karla, like many other Venezuelans, relies on the government's social policies. Neither the public health system nor the subsidized food program seem to be enough to attend a population that needs to comply with the social distancing rules applied in high-income countries.

Mikhael G. Iglesias L. is a graduate student at the Center for Latin American and the Caribbean studies at NYU and a former professor and researcher at Universidad Católica Andrés Bello in Venezuela.