U.S. security and development assistance has caused great harm in Central America. But Trump’s decision to cut it off is nothing to be celebrated. 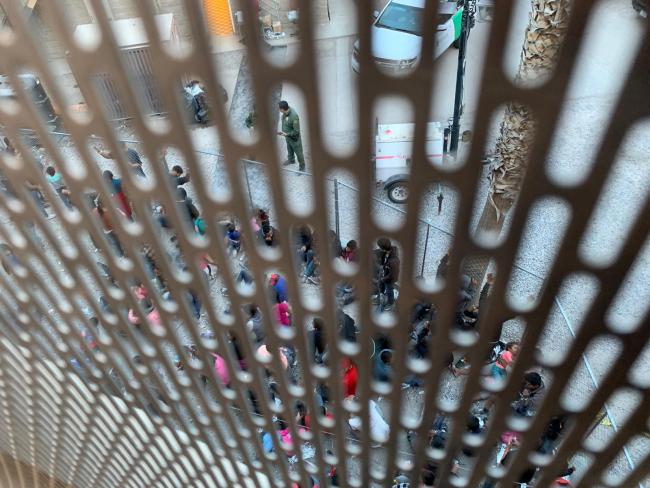 Donald Trump’s cruel attacks on Latin American immigrants have reached a fever pitch: his latest tweets threaten to permanently close off large parts of the border, scapegoating the migrants and asylum-seekers that cross through it to new extremes. Last week, disturbing photos showed migrants and asylum-seekers from Central America cordoned off behind a chain-link fence under a bridge in El Paso amid a spike in arrivals. And on Sunday, the Trump administration announced it would be cutting off all aid to Guatemala, El Salvador, and Honduras because they “haven’t done a thing for us.” This came just two days after representatives from the four countries signed a ”regional compact” aimed at jointly stemming migration.

The question of U.S. foreign aid is a complex one. It is undeniable that U.S. assistance to Latin America has had a largely destructive impact and never comes without massive strings attached. Indeed, in many cases, this aid has exacerbated conflicts and violence, driving migration rather than stemming it. The examples are endless: Funding the Contras in Nicaragua in the 1980s, backing Erfaín Ríos Montt’s genocidal regime in the early ‘80s in Guatemala, and driving militarization through multi-year aid packages such as Plan Colombia, the Mérida Initiative in Mexico, and the Central American Regional Security Initiative (CARSI), and Alliance for Prosperity in Honduras, El Salvador, and Guatemala, have had devastating and often deadly consequences. That isn’t to mention the U.S. role  backing the 2009 coup in Honduras, funding abusive “elite” militarized police units in Honduras, and its hypocrisy towards government abuses taking place in countries whose governments it agrees with versus those it doesn’t.

There is little reason to see U.S. aid to these countries in good faith. Washington offers aid only when its uses align with U.S. geopolitical goals, beholden to vague notions of “human rights” that are usually ignored. It is true that not all aid is the same. Indeed, some NGOs have done impressive research tracking how much money these countries receive and how they use it. In Latin America, aid apportioned through the State Department typically falls into two categories: security assistance and development assistance. Security assistance refers to police assistance, including training, equipment, and professionalization programs. Since the end of the Cold War, most of this aid has been oriented towards “helping” Latin American countries fight drug trafficking and securitize their borders—an approach that has often increased violence and human rights abuses. In Mexico and Central America, for example, the U.S. has helped fund more professional (read: lethal) equipment like tanks and helicopters, not to mention thousands of guns, and led training programs for the military and police.

Development assistance usually relates to projects to promote “economic prosperity” and “rule of law” through initiatives like judicial and police reform, often with the help of international institutions like the International Monetary Fund (IMF) and World Bank. The distinction between security and development aid is not insignificant—there’s no doubt that these countries would benefit from judicial reform, and the U.S. also helps fund a number of NGOs in the region doing good work. For several years, it helped to fund the work of the International Commission Against Impunity in Guatemala (CICIG). But more recently, it seemed unfazed by Guatemala’s misuse of U.S.-supplied Jeeps to intimidate CICIG as President Jimmy Morales attempted to expel the commissioner from the country, and instead donated a fresh batch of Jeeps just months later. As a 2018 Congressional Research Service report states plainly, the true intentions of U.S. aid are “to support development and other U.S. objectives.”

On the Left, the debate around U.S. aid has fallen into two categories. Closer to the political establishment, one wing has focused its efforts on trying to cut off or reduce security aid through legislative mechanisms that impose more rigorous conditions on certain funding. These conditions can do both good and evil. For example, before the Trump administration cut off aid, it had set conditions for aid to Honduras, Guatemala, and El Salvador. In FY 2016 and 2017, 25 percent could be withheld if the Secretary of State deemed that the governments had not done enough to inform “their citizens of the dangers of irregular migration, combating human smuggling and trafficking, improving border security, and cooperating with the United States to receive and reintegrate repatriated citizens who do not qualify for asylum,” according to a Congressional Research Service report. Fifty percent of the funds, on the other hand, could be withheld if the governments were not certified as adequately addressing 12 other concerns. Some of the concerns listed seem laudable, like protecting the rights of journalists and opposition parties and supporting programs to reduce poverty and promote equitable growth. But we should view others, like “increasing government revenues” and “countering gangs and organized crime,” with deep skepticism.

All in all, these conditions read as a veiled threat: stop your people from leaving and cooperate with our policy recommendations—from mano dura to the drug war to neoliberal reforms—or else. It is worth noting that under the Obama administration, the conditions placed greater emphasis on human rights, but they still went hand-in-hand with requirements about stemming unauthorized migration. In any case, the Congressional Research Service attests that the governments of El Salvador, Guatemala, and Honduras received their certifications to secure their full aid packages in FY 2016 and 2017.

At the same time, U.S.-based activists on the Left have for years called for security aid to be cut off to these countries, because it all falls under the same pernicious neocolonial umbrella and does much more harm than good. It is interesting, then, that years after activists first pushed for the passage of the recently-reintroduced Berta Cáceres Act—a reference to the Honduran environmental activist slain in 2016—which would cut off security aid to Honduras pending significant improvement in human rights and sanctions for rights-abusing security forces, the Trump administration would act unilaterally to eliminate aid for completely different reasons. 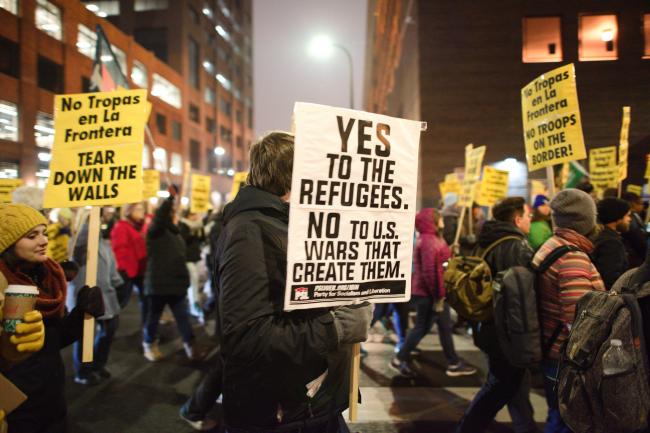 Despite the harmful effects of U.S. aid in Central America and beyond, Trump’s decision is nothing to celebrate. It should be read as an attack on Central Americans who are fleeing danger and violence and seeking safety in the United States. Following his steady pattern of attacks on immigrants—from limiting the legal right to apply for asylum to trying to cut off TPS and DACA to closing off the border entirely—Trump seeks to deprive Central Americans of all options. He has suffocated legal pathways to migration and decreased resources in a time when they are needed urgently.

This is a crucial situation that the Trump administration has repeatedly, cruelly, and counterproductively exacerbated. It is a crisis that U.S. policy has in large part facilitated through its longstanding deterrence policies that led migrants to take more dangerous routes, effectively ending circular migration. Trump has doubled down on these deterrence strategies through treating Central American migrants and asylum-seekers as subhuman, caging them, separating them from their families, sending them to wait in Mexico for a court to rule on their asylum claims, physically blocking them with a wall, and otherwise threatening them. Cutting off aid is another one of these threats.

It is true that the monetary significance of this aid is not high. The Trump administration has consistently shaved its aid to the region, and its request for 2019 totaled only $435.5 million for Central America, before it was summarily canceled. Last year, that number was $627 million, down from $700 million in 2017 and $754 million in 2016, according to the Congressional Research Service.

These countries receive much more money through remittances, which overwhelmingly originate in the United States. In 2018, remittances to these countries alone totaled some $19.5 billion, a report from the Inter-American Dialogue finds. In El Salvador and Honduras, remittances have climbed to represent 22 and 20 percent of GDP, respectively. Blocking migration would be far more catastrophic to the Honduran, Guatemalan, and Salvadoran economies than cutting off aid. But the administration is trying to do both, which is why we must see the move as part of a pattern of myriad other cruel actions that seeks to exterminate immigrants from the United States.  On Monday, Homeland Security Secretary Kirstjen Nielsen called for 750 Customs and Border Protection officers to be sent to El Paso to speed up the process of deporting Central Americans to Mexico.

Meanwhile, the most recent Department of Defense budget proposal for FY2020 alarmingly requests massive increases in funding to U.S. Northern Command, which will mostly go to Mexico. This aid would be used for "security cooperation," most likely in the form of infrastructure, training, and counter-migrant activities, according to researcher John Lindsay-Poland. It seems, then, that much of the funding it is cutting from State Department initiatives will be rerouted for explicitly militant activities to take place in Mexico. Such a move pulls the cape off any questions over Trump's intentions for the region and the people who seek to escape it.

Our call, then, should not be for Trump to reinstate aid to Central America. It should be to work towards restoring justice and dignity to human beings who have dropped everything to seek a better life. Sadly, the battle is more uphill than ever.

Laura Weiss is Managing Editor at NACLA Report on the Americas. She has written on Central American refugees, immigration, and human rights in Mexico for NACLA, The Nation, In These Times, Latino USA, Jacobin, and more. She also worked as the Latin America Rights and Security Fellow at the Center for International Policy (CIP). Follow her work at lauraweiss.me.