Ortega’s Developmentalism Is Based on the “Popular Economy”—But What Does that Mean? 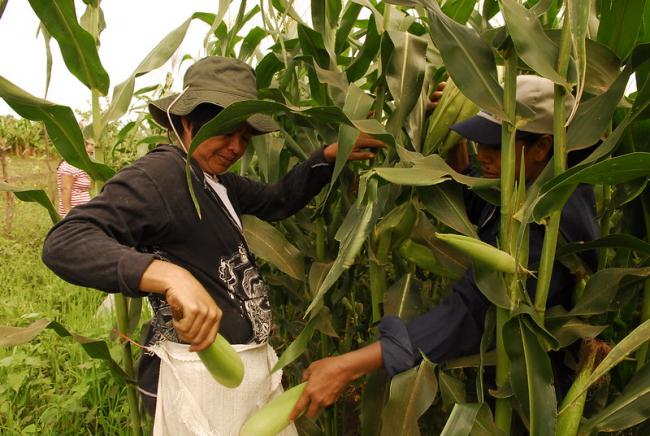 Daniel Ortega’s Sandinista administration in Nicaragua has polarized opinion on the international Left. Those who defend Ortega typically emphasize his government’s economic policies, especially means-tested welfare programs, while those who criticize the president tend to focus on the erosion of civil and political rights associated with his paternalistic governing style. By talking past each other, internationalists have repeatedly deferred critical discussion of Ortega’s developmentalist gambit and the aspirational economic transition associated with it.

If our goal is to assess the Ortega administration’s political character, we must evaluate the credibility of the Sandinista developmentalist project in historical and geopolitical context, but also on its own terms and according to its own categories of analysis. This requires contending with the ideology of market-driven socialist transition associated with contemporary Sandinista economic policy, and especially its key organizing principle, the “popular economy.”

Ortega’s most vociferous defenders routinely evoke the popular economy not only as evidence of his government’s socialist credentials, but also as a uniquely transformative social phenomenon that can only be defended by preserving Sandinista control over the state. But despite this rhetoric, it is far from clear that the popular economy represents a viable alternative to neoliberalism. In fact, with Ortega’s political and social synthesis now fracturing beyond the point of repair, it is increasingly hard to say whether the 21st century Sandinista developmentalist project has actually succeeded in generating popular institutions capable of exerting power over capital at all.

What Is the Popular Economy?

From the earliest days of the revolutionary period (1979-1989), groups of artisans, market vendors, and others seized upon the state rhetoric of patriotic production to assert collective control over their work by forming cooperatives. At the same time, a wave of workplace takeovers delivered private factories and estates to the incipient cooperative sector, to be administered as worker-run enterprises with the assistance of the state. And in the countryside, as land reform collectivized thousands of landless agricultural workers in state farms, smallholders organized a national network of credit and service cooperatives which found political expression in mass organizations like the National Union of Agriculturalists and Ranchers (UNAG).

By 1982, there were 2,849 registered cooperatives in Nicaragua, directly enrolling an estimated 67,000 workers in the agrarian, industrial, and service sectors. Even as the Sandinistas’ mixed economy fractured under the stress of foreign and especially U.S interference, “an abundance of workers…continued to produce and sell needed goods in small, independent associations,” according to anthropologist Florence Babb.

But after the disastrous election of 1990, when the Sandinistas were replaced with a neoliberal administration, the cooperative sector went into crisis. In the neoliberal period, structural adjustment resulted in the exclusion of more than 70 percent of Nicaraguan workers from formal employment, and an unruly informal sector came to characterize the fractured national economy. This prompted Sandinista intellectuals like Orlando Núñez to develop “the other strategy” for socialist transition, which emphasized cooperative enterprise over political confrontation with neoliberalism. Having lost the state, Sandinista cadres and rank-and-filers alike increasingly oriented their activities towards the market, which they interpreted as available for revolutionary intervention. The diffuse network of cooperative and self-managing enterprises that had previously been grouped in the cooperative sector took on a new political function in the context of neoliberal transition. The “popular economy,” or la economía popular, associativa y autogestionaria, entered the Nicaraguan political lexicon, becoming a key category through which thousands of workers understood themselves and their labor.

With the Sandinista political party incapable of recapturing executive power and reinstating the mixed economy, the popular economy allowed Sandinista-aligned enterprises to advance “concrete proposals for alternative development” at a time when more confrontational politics were “seen by many as counterproductive,” as historian Rosario Montoya has pointed out. In this context, many self-managing enterprises adopted an opportunistic orientation towards neoliberal adjustment, with some even capturing state support through what Babb calls “the new administrative apparatus for and discourse on microenterprises.”

This proximity produced a corrosive kind of competitive pressure, which in turn spurred a process of degeneration Babb terms “the unmaking of the revolution.” All four of the small industrial cooperatives Babb monitored during the 1990s ultimately floundered, often shedding their democratic commitments as they attempted unsuccessfully to enhance productivity in a desperate bid to survive. Other self-managing workers’ associations, especially in the agricultural sector, became “dependent on foreign funds for anything beyond bare survival” during this time, as Montoya notes. The popular economy persisted, but it remained precarious, undercapitalized, and significantly constrained by the wider commercial context in which it operated.

Key to the political bargain through which Ortega regained the presidency in 2007 was his promise to integrate the popular economy into the state’s development apparatus. His administration founded the Ministry of the Household, Cooperative, Community, and Associative Economy (MEFCCA) to promote a wide range of popular economy-related activities. As well as registering thousands of new cooperatives, by 2014 MEFCCA also administered the country’s three most significant means-tested welfare programs, which together enrolled an estimated 48,000 beneficiaries.

It is undeniable that these programs, by providing pathways towards income security and upward mobility, enhanced the individual economic positions of many unemployed and informally employed workers. But too often, international observers take the state at its word by assuming that these programs’ short-term success also validates the larger developmentalist theory underpinning them.

Does the growth of the popular economy actually threaten the reproduction of the capitalist system? Or does it in fact prop up a dysfunctional neoliberalism by substituting collective subsistence strategies for adequate wages in the formal sector? More to the point, does the popular economy—and the larger project of 21st century Sandinista developmentalism—enhance workers’ power or diminish it? 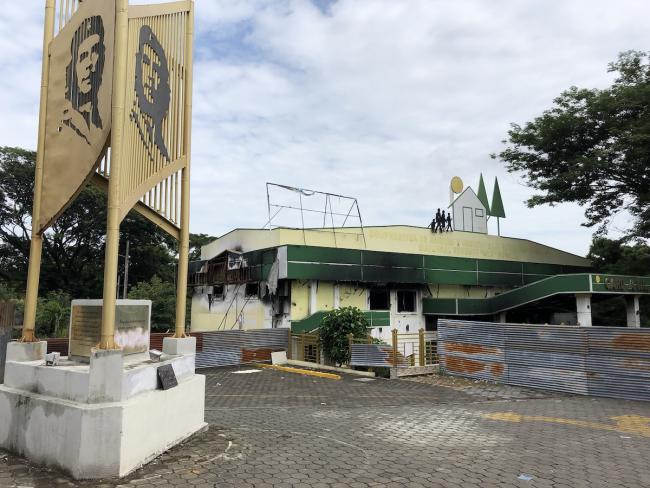 Neoliberalism from Above and Below

To assert the scale and importance of the popular economy, pro-Ortega partisans typically cite an influential 2016 essay by Núñez, “Who Produces Wealth in Nicaragua?” (“¿Quién produce la riqueza en Nicaragua?”). In this essay, which he calls “a statistical observation,” Núñez credits the popular economy with generating more than 60 percent of Nicaragua’s national wealth. But he arrives at this figure by treating the popular economy and the informal sector as interchangeable concepts, unconvincingly glossing all productive labor not mediated by a formal wage relationship as non-capitalist. His essay is more aspirational than analytical; as a piece of empirical scholarship it fails even on its own terms.

Núñez, together with his colleague César Martínez, modified the essay in the midst of the 2018 insurrectionary challenge to Ortega to be more frank about the popular economy’s subjective dimensions. While the informal sector may represent the precondition that makes the popular economy possible, the popular economy itself represents the transcendence of that informality—what Núñez and Martínez call “a significant advance in the political economy of the revolution.”

This is the premise of the theory of market-based socialist transition underlying the popular economy in contemporary Nicaragua—and it’s an argument Núñez has been making for quite some time. In 1996, for example, Núñez participated in a remarkable collaboration with U.S.-based internationalist (and former NACLA editor) Roger Burbach and anti-Stalinist Russian socialist Boris Kagarlitsky. In the era of neoliberal globalization, they argued, those who had been discarded from capitalist class relations could autonomously develop a counter-hegemonic mode of production—and, by out-competing capitalist firms in the national market, ultimately transcend the capitalist system as a whole. Provocatively, the three coauthors predicted that decentralized grassroots entrepreneurialism—“a synthesis of socialism and capitalism”—would represent the engine of working-class struggle in the neoliberal era.

Today, however, it is clear that the entrepreneurial self-activity of the informalized working class can just as easily reinforce neoliberalism as subvert it. Verónica Gago has coined the term “neoliberalism from below” to capture this disorienting reality, arguing that, in the context of mass joblessness, “communitarian moments and moments of brutal exploitation” stand in mutually-supporting alignment. Economic activities in the informal sector might mitigate neoliberalism’s unruliest effects, she argues, but they do not threaten to transform the conditions of generalized deprivation and hyper-exploitation.

Similarly, René Rojas has recently pointed out that the relative smallness of the formally employed working class placed hard limits on the redistributive policies advanced by Pink Tide governments in Bolivia, Ecuador, and Venezuela. These governments’ bases demanded short-term poverty alleviation programs for the unemployed and informally employed. But workers relegated to the nonproductive informal sector were structurally incapable of exerting the systemic leverage over private employers necessary to fund such programs in the longer term.

Ortega’s government found itself in much the same position. In Nicaragua, the social problem Burbach, Kagarlitsky, and Núñez identified—the estrangement of large numbers of workers from formal employment—remains unresolved. Under Ortega, labor force participation failed to grow any faster than it had during the neoliberal era, and it has actually trended down since 2018. The job growth that did occur was largely confined to sectors, like free trade, that produce relatively little value per capita, and so would offer workers minimal structural leverage even if the Ortega administration didn’t systematically prevent them from organizing.

For the Sandinista state, preserving and developing the popular economy has generally meant making unsustainable concessions to private sector interests in a losing battle to stabilize the national economy. And Ortega’s poverty alleviation programs were never redistributive in a social sense, because they were not funded by direct taxation but rather by a steady influx of foreign aid.

Direct grants from Venezuela heavily subsidized 21st century Sandinista developmentalism, providing Nicaragua with as much as a fifth of its annual budgeted income in the early 2010s. This aid revenue funded welfare programs while also allowing for a bonanza of state-led investment in extractive industries. But when Venezuelan aid dropped off dramatically in the years prior to 2018, the Ortega administration was unable to sustain its spending. It lacked the political leverage to demand higher contributions from capital, and, having already heightened the rate of exploitation in key capitalist sectors to an unsustainable degree, it also lacked the popular influence to contain disruptive social conflicts any longer. This is the source of the Ortega administration’s deep and ongoing political crisis, which will not be easily overcome. 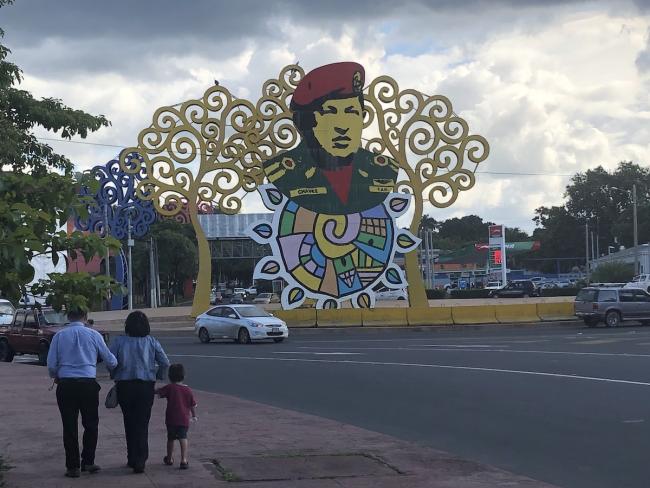 Ortega’s supporters insist that state-led poverty alleviation was central to 21st century sandinismo, but too often they fail to scrutinize the contradictory developmentalist framework through which economic policies are enacted in Sandinista Nicaragua. This oversight obscures the full significance of the 2018 insurrection, which was not a reprise of Contra War-era social conflicts but instead an expression of distinctly 21st century grievances, in a country where a sizable majority of the population was born too late to remember the revolutionary 1980s.

Perhaps international observers could be forgiven for thinking at the beginning of Ortega’s tenure in 2007 that his political and economic synthesis represented, if not a serious challenge to neoliberalism, at least the most humane development pathway available to Nicaragua in the new millennium. But that moment has long since passed. Today, it is clear that the Ortega administration itself constitutes an obstacle to the kind of radical egalitarian future the protagonists of the popular economy envision. As some of those protagonists have long argued, that kind of future lies beyond Ortega’s brand of neoliberal developmentalism.

Jonah Walters has a PhD in Geography from Rutgers, The State University of New Jersey. He defended his dissertation, The Popular Economy and Its Protagonists: Community, Cooperation, and Development in Nicaragua, in May 2021.