Summit of the Americas Underlines Widespread Discontent with U.S. Policy

Criticisms of the United States and OAS underlined the need to revive regional integration initiatives independent of U.S. influence. 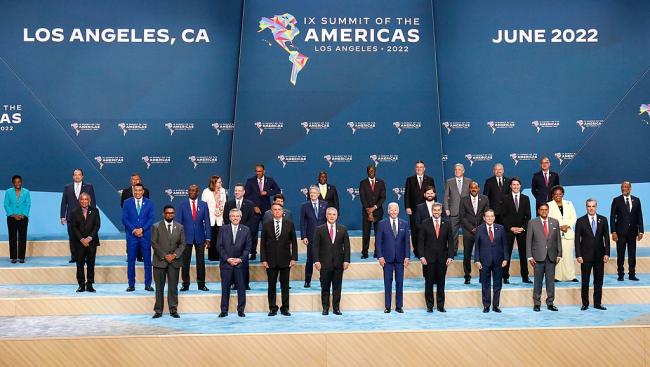 Long before it even began on June 6, this year’s Summit of the Americas, held in downtown Los Angeles, was widely expected to be a flop. And indeed it was. As many media outlets predicted, the controversy surrounding the U.S. government’s decision to exclude Cuba, Venezuela, and Nicaragua from the invitee list ended up overshadowing the summit’s mostly dull proceedings.

Several heads of state—including Andrés Manuel Lopéz Obrador of Mexico—boycotted the summit because of the U.S. decision, and many other regional leaders began their speeches by criticizing the exclusions. Though Biden’s team managed to cobble together a weak regional migration agreement and attempted to awe their Latin American and Caribbean audience with a grand sounding “Americas Partnership for Economic Prosperity,” the summit will almost certainly be remembered primarily for the unhappy reactions to Biden’s blacklisting of the three U.S. adversaries.

Yet focusing on the response to these exclusions, as most of the media has done, provides us with a limited understanding of the general malaise that plagued the summit. Indeed, the U.S. decision to freeze out the three governments, previously labeled the “troika of tyranny” by former Trump advisor John Bolton, was but a symptom of a far bigger issue, one that many leaders touched on during the summit: the continuation, under Biden, of Trump’s destructive and deeply unpopular policies.

Presidents, prime ministers, and foreign ministers from at least a dozen countries slammed the United States’ unilateral exclusion of Cuba, Nicaragua, and Venezuela, while only the outgoing right-wing president of Colombia publicly defended the decision. But many of these leaders used their brief time at the podium to express additional grievances related to other unilateral U.S. policies.

A number of heads of government and foreign ministers strongly criticized U.S. unilateral economic sanctions, or “blockades,” targeting Cuba and Venezuela. Belize’s prime minister, Johnny Briceño, who currently chairs the CARICOM group of 15 Caribbean countries, was passionate in his condemnation. “The illegal blockade against Cuba is an affront to humanity,” he said. “In fact, it is un-American.” Mexico’s foreign minister Marcelo Ebrard noted: “It’s incredible that at this stage we continue to see blockades, embargoes, and sanctions, even during the pandemic, against countries of the Americas, in violation of international law.”

The denunciations of Briceño, Ebrard, and other speakers were reminiscent of the 2012 Summit of the Americas in Cartagena, Colombia, when many of the region’s leaders excoriated President Obama for both vetoing Cuba’s participation in the summit and for carrying on with the Cold War-era embargo against Cuba. Obama, to his credit, got the message: he allowed Cuban president Raúl Castro to participate in the next summit and, more importantly, he began a process of normalization of relations with Cuba and took significant measures to ease U.S. sanctions against the country. These moves helped improve U.S. relations with the many Latin American governments that had lost faith in Obama following his administration’s role in helping a 2009 military coup in Honduras succeed.  It appeared that U.S-Latin America policy was moving in a better direction.

President Trump reversed Obama’s Cuba policy and expanded and hardened U.S. sanctions against the island far beyond the measures in place prior to Obama’s reforms. Guided by the hawkish Florida Senator Marco Rubio, he also implemented a disastrous set of “maximum pressure” policies targeting the government of Nicolás Maduro in Venezuela. These included draconian economic sanctions that greatly exacerbated the economic crisis in Venezuela, contributing to widespread malnutrition and poverty and causing tens of thousands of deaths. Then, starting in 2019, the Trump administration attempted to forcibly remove the Maduro government by recognizing a parallel government, led by hard right legislator Juan Guaidó, and publicly encouraging a military coup against Maduro, while at the same time threatening a U.S. military invasion.

When Biden took office in early 2021, there was hope that he would quickly annul many of Trump’s executive actions and, with regard to Cuba and Venezuela policy, revert to the status quo ante of the Obama years. But, despite repeated pleas from governments in the region, from U.S. members of Congress, and even from Venezuelan opposition figures, Biden has largely maintained Trump’s crushing sanctions on both countries. In the weeks prior to the summit, the White House announced a few half-measures designed to ease these sanctions, very slightly. If the goal was to mollify the region’s governments ahead of the summit, it does not seem to have worked.

Another major grievance raised by a number of the summit’s attendees was the role that the Organization of American States (OAS) played in the 2019 coup in Bolivia, an issue that has also been raised repeatedly by progressives in the U.S. Congress. “Interventions like those that took place in Bolivia are not helpful for the promotion of democracy,” said Honduran foreign minister Eduardo Enrique Reina, in a barely veiled reference to the OAS actions that paved the way for the coup. By promoting false claims of fraud following the country’s presidential elections that year, OAS officials stoked a major political crisis that resulted in the forced removal of elected president Evo Morales under pressure by the country’s military. The far-right de facto regime that then seized power persecuted political opponents and massacred dozens of indigenous protesters.

Argentina’s foreign minister, Santiago Cafiero, was less diplomatic than his Honduran counterpart. “The OAS lost its legitimacy,” he said. “The OAS must never again legitimize destabilization processes, it must not be involved in a coup as recently happened in Bolivia.” Mexico’s Ebrard also brought up “the shameful role that the OAS recently played in the coup in Bolivia.” And a young activist directly confronted Luis Almagro, secretary general of the OAS, at a side event on media freedom. “Luis Almagro, you have blood on your hands,” he yelled, shortly before being removed by security guards. “Because of your lies there was a coup in Bolivia. A coup against the democratically elected government. And that dictatorship, that you helped install, massacred 36 people,” he shouted, referring to the Indigenous protesters who were gunned down by security forces in two separate massacres, as documented by an independent group of international experts backed by the Inter-American Commission on Human Rights (IACHR).

The secretary general went further than supporting the false fraud narrative that formed the pretext for the coup in Bolivia: he also quickly recognized the ultra-conservative coup government, blamed Morales for perpetrating a “self-coup,” and then kept silent as the coup authorities committed massacres and persecuted their opponents. All of this scored him more points with foreign policy hardliners in the Trump administration, like Trump’s neoconservative national security advisor John Bolton and the anti-Castro activist Mauricio Claver-Carone, who also held a position in the National Security Council.

Almagro had already gained the admiration of these and other hawks in Washington when, early on in his tenure at the OAS, he abandoned all pretense of neutrality and became an avid backer of a strident far-right agenda in the region. He had called for military intervention in Venezuela in 2019 and had warmly supported Honduras’s notoriously corrupt and autocratic right-wing president, Juan Orlando Hernández. In 2020 he was called out by regional human rights groups for firing the executive secretary of the IACHR not long after the Commission had denounced the violent post-coup repression in Bolivia.

Hope for change at the OAS was in the air when Biden and his team took power. If any government could reign in Almagro’s right-wing activism, or even have him removed in light of his misconduct, the new U.S. administration—the OAS’s main funder—could. Instead, however, the U.S. acting representative to the OAS, Bradley Freden, has continued throwing his full support behind Almagro. Freden also has pointedly endorsed the OAS’s Big Lie regarding the Bolivian 2019 election, including at an August 2021 extraordinary OAS session in which he referred to “the remarkable work of the OAS electoral observation mission in Bolivia.”

Biden’s secretary of state, Antony Blinken, has also had a warm relationship with Almagro. At the summit he referred to the secretary general as “my friend” and—seemingly oblivious to the increasingly intense criticism of Almagro coming from other OAS members—said “it’s wonderful to be working with you as always.” In the same breath, he spoke of addressing “the pressing challenges that we face in our hemisphere” including “threats to democracy and human rights.”

But much of the region has had enough of endless lectures on human rights and democracy from the Biden administration, while being subjected to the same inhumane, destructive policies that were implemented under Trump—including sanctions that make the United States, by far, the biggest violator of human rights in the region. Protests nearby, organized by a “People’s Summit” convened by social justice organizations, regularly reminded Los Angeles and the world of this fact, with huge banners with a call to “End all U.S. Blockades and Sanctions.”

Inside the Intercontinental Hotel, where the exclusionary summit was being held, the speeches were largely diplomatic but still sent a clear message to the United States. Clearest, perhaps, was the speech by Argentina’s president Alberto Fernández, which contained a long litany of complaints about U.S. policy and the OAS. “President Biden, it is time to open up in a fraternal way to favor our common interests,” Fernández said, reaching the crescendo of his address. “The years prior to your arrival in the U.S. government were marked by an immensely damaging policy for our region deployed by the administration that preceded you. It is time for those policies to change and the damage to be repaired.”

It is unlikely that the message of Fernández and other regional leaders hit home. Biden and his team seemed more concerned with placating Cuban-American hardliners in Congress and in South Florida than in genuinely listening to the rest of the hemisphere.

And so, the Biden administration ignored the many complaints voiced during the summit, and carried on with its agenda, focused largely on presenting its half-baked “Americas Partnership for Economic Prosperity”—the latest hollow re-purposing of Kennedy’s “Alliance for Progress.” Little is yet known about this grand regional plan, but it appears to seek to counter China’s trade and investment in the region (which now significantly surpasses that of the United States) through “public-private partnerships,” the beefing up the of Inter-American Development Bank’s private sector lending arm, and fresh bilateral trade negotiations with countries that already have free trade agreements with the United States. Just what the doctor ordered: another big neoliberal program for Latin America, though far less ambitious than Clinton and Bush’s failed Free Trade Area of the Americas.

In the end, though, the 9th edition of the Summit of the Americas may well have achieved one significant thing: convincing many Latin American and Caribbean governments that the only viable way forward is to re-invigorate regional groups like the Community of Latin American and Caribbean States (CELAC) and the Union of South American Nations (UNASUR), or to come up with a new regional integration scheme—without any involvement of the United States.

Alexander Main is director of international policy at the Center for Economic and Policy Research and a member of NACLA's editorial committee.