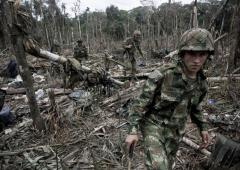 After half a century, Colombia may put an end to its conflict—if the U.S. will allow it.

The Peace Dividend and Post-Conflict Criminalization in Colombia

February 12, 2014
Peace in Colombia is in a precarious position—says the literature on post-conflict countries. A 2003 report states that on average, 44% of countries emerging from civil war return to conflict within the first five years.

Looking Back on 2013 in Colombia, From Redactions to Resolutions

December 26, 2013
As we approach the end of the year, Red Hot Burning Peace takes the opportunity to report on some overlooked stories from the last couple of months and tie up some loose ends, covering President Santos' apology to the comunidad de Paz de San Jose de Apartado, Drummond's fine, Petro's ongoing battle for reinstatement, and the current FARC ceasefire.

December 26, 2013
In a report published on December 21, the Washington Post brought the U.S. role in the Colombian conflict into sharper focus when it revealed the role of the CIA and the NSA in the assassination of the Armed Revolutionary Forces of Colombia (FARC) commander Raul Reyes in March of 2008. According to the report, the U.S. covert military operations were funded by a multibillion dollar “black budget.”

December 6, 2013
The Colombian media is in the midst of a nostalgia fest, sparked by the twentieth anniversary of Pablo Escobar's death. The jefe of the Medellín Cartel, estimated fifteenth richest man in the world, some time Liberal party congressman, some time grave robber, Escobar has been the subject of a number of best selling books in both Colombia and the United States.

Santos in the White House Today: Will Obama Derail the Quest for Peace?

December 3, 2013
President Juan Manuel Santos meets today with President Barak Obama in the White House. The United States is not only the major trading partner and major market of Colombia’s exports, but also an active participant party in Colombia's 50-years long civil war.

November 13, 2013
A few days ago the Juan Manuel Santos government and the Revolutionary Armed Forces of Colombia (FARC) signed off on the second item of their five-point negotiation program: that of political participation. This agreement, alongside the preceding agreement on the agrarian question, elevates the positive expectations that the peace process is moving in the right direction, and that prospects of a final agreement are closer than ever before.

November 1, 2013
The specter of the increasing public debt in Colombia is expected to generate a deep economic crisis if not addressed.

September 25, 2013
FARC negotiators Iván Marquez and Pablo Catatumbo have both been unsatisfied with the adamant refusal of the Santos government to tackle tough points in the peace negotiations. This is especially the case with disagreements having to do with the agrarian question.