With the country caught in a pitched winner-take-all contest, it is unsurprising that voters feel apathetic. Solutions must come from the space between the extremes. 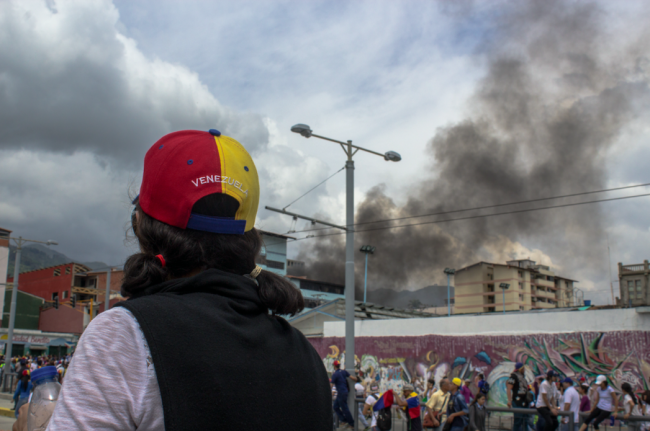 In the sweltering Caribbean heat, several dozen casually attired Venezuelans packed an air-conditioned meeting room in a luxury resort in Colombia’s Cartagena de Indias. It was October 2001, and the occasion was the 25th annual meeting of the Grupo Santa Lucía, an informal gathering of businessmen and politicians that since the late 1970s had served as the launching pad for some of the country’s most influential public policy ideas.

While highly relevant in the late 20th century, the group had lost some of its luster after proving unable—or unwilling—to attract members of the new Hugo Chávez administration. Instead of its original conception as a nonpartisan space for dialogue, it had evolved into an echo chamber for pro-opposition ideas, strategies, and frustrations. As the meeting drew to a close, participants listened attentively to a presentation from one of Venezuela’s established public opinion firms. When a slide came up showing the evolution of Chávez’s approval ratings, a collective sigh of elation swept the room. For the first time since he had entered office, more Venezuelans disapproved of Chávez than approved of him.

I had accepted the invitation of the Grupo Santa Lucía to give a presentation on the country’s economic perspectives. One year earlier, I had been unanimously elected head of Venezuela’s Congressional Budget Office as a consensus candidate between the government and opposition. In keeping with my mandate, I managed the office as a technical, nonpartisan body while dialoguing and exchanging ideas with all groups. Yet I soon learned that not everyone thought nonpartisan analysis was a good idea. One of my office’s reports, which pointed to the unsustainability of the government’s social security proposal, had incensed the president of the Social Development Commission, a rising star in Chavismo, who called for my dismissal. His name was Nicolás Maduro.

By that time, it appeared to be clear that it was possible to drive an unpopular Latin American president from office through mass demonstrations, particularly if they coincided with a shift in the loyalty of key military officials and quick recognition from the United States. Few, for example, had lamented the 1997 ouster of Ecuador’s Abdalá Bucaram after only six months in office when an opposition-dominated Congress ruled him unfit to govern—even though the country’s highest court found the impeachment unconstitutional. A similar move seemed to be in store in the early hours of April 12 as a faction of legislators from Chávez’s Movimiento V República (MVR) led by veteran politician Luis Miquilena, who had become estranged from Chávez in late 2001, appeared ready to swear in a new government.

Yet in a pattern that would become all too familiar over the next two decades, the opposition overreached, eschewing any negotiations with the moderate Chavistas led by Miquilena. Instead, they backed the inauguration of Fedecámaras’s Pedro Carmona as president, even though he had never held any public office.

Even after Carmona’s brief presidency crumbled, the opposition retained significant political strength, and Chávez remained unpopular. The economy had gone into recession after a sustained loss in international reserves forced the central bank to devalue in February 2002. By the end of the year, a new strategy had coalesced. Leveraging support among oil industry managers, the opposition called an indefinite general strike that would include the oil sector and bring government revenues to a standstill. Cut off Chávez’s access to petrodollars, the logic went, and he would be unable to survive in office.

While the oil strike managed to grind oil revenues to a halt, it didn’t come close to ousting Chávez. Yet by driving the economy into a double-digit contraction, the opposition convinced Venezuelans of something that Chávez had not been able to on his own: that his opponents were willing to do anything to put themselves in power, even if it meant causing lasting harm to the nation’s economy. The 2002-2003 strike lent credence in the eyes of many Venezuelans to the characterization of the country’s opposition as a group led by upper-class figures who could afford a luxury that regular people could not: spending two months without a paycheck. Chávez responded by pouring public resources into government social programs, coasting to victory in the 2004 recall referendum.

Fast forward to 2022. During a virtual session held on January 3, a group of legislators from Venezuela’s National Assembly elected in 2015 approved a proposal to extend Juan Guaidó’s term in office for one additional year. The legislators, who claim to represent the last institution elected through free and fair elections, have used a disputed interpretation of the constitution to claim control over the presidency and, perhaps more importantly, billions of dollars of state-owned offshore assets. The main argument in favor of maintaining the interim government is that it is needed to block the Maduro government’s access to these resources.

The opposition strategy to dislodge Maduro is uncanny in its resemblance to what it tried against Chávez two decades ago. Like then, it has boycotted elections and called for a military insurgency while doing everything in its power to restrict the government’s access to funds. At the center of the strategy, once again, is the attempt to bring oil revenues to a standstill. While the opposition no longer has any sway over oil industry managers, it has enjoyed the full support of an even more important actor: the U.S. government. “Driving the state-owned oil monopoly’s production as low as possible, which the Opposition fully supported, might well have been enough to crash Maduro’s regime,” Trump’s former National Security Advisor John Bolton wrote in his 2020 memoir about the decision to impose oil sanctions on Venezuela. “I thought it was time to turn the screws and asked, ‘Why don’t we go for a win here?’”

Once again, the strategy ended in disaster. Maduro remains firmly ensconced in power. Guaidó’s coalition is beset by infighting, and corruption scandals around the interim government’s control of assets have badly tarnished its image. Oil production has slowly crept back up, more than doubling its lows of mid-2020, and the economy is set to see its first year of positive growth since 2013.

Absent from the opposition’s political strategy over most of these past years are attempts to engage with centrist forces or sympathizers of Chávez, whose approval rating continues to be in the mid-50s, dwarfing that of any opposition politician. The opposition’s singular focus on driving Maduro from power has led it to disregard most initiatives for agreements to address the country’s humanitarian crisis, such as an oil-for-food program or the use of frozen funds to purchase vaccines. Of course, the idea of removing an unpopular president can be a strong catalyst for public mobilization under some circumstances. Yet over time it is unsurprising that voters feel increasingly disconnected from a political movement that appears to say very little about their day-to-day problems.

It has always struck me how hard it has been for a political center to emerge in Venezuela despite the apparent demand for it revealed in opinion studies. One reason is that in the logic of a high-stakes political conflict, dissidents are treated even more harshly than adversaries.

I had a taste of this reality when I served as chief policy advisor for Henri Falcón’s 2018 presidential bid, which tried to chart a middle-of-the-road approach to the country’s winner-take-all conflict by proposing a democratic electoral transition. Some of the country’s foremost public policy experts were pleased to give feedback on our proposals on the condition that we never reveal their involvement publicly—such was their fear of retribution from the opposition leadership. Two years later, Guaidó’s central bank chief accused me of “treason to the fatherland” for having advised international investors on Venezuela when I headed the Andean economics group at Bank of America. His language, arguments, and demeanor were strikingly like those of Maduro when he had called for my dismissal as head of the Congressional Budget Office 15 years earlier.

The opposition’s pervasive inclination to appeal to maximalist strategies centered on removing its adversary from power while dismissing grassroots mobilization, coalition building, and reform advocacy is not coincidental. The shift in political strategies came in the wake of the electoral and institutional reforms of the 1990s that significantly increased the power of the executive branch and weakened political parties. Winner-take-all strategies, of course, seem very appealing when those who wield them believe they are winning; their true unattractiveness is only fully revealed once they realize that they may have lost.

There are signs that the grip on maximalist strategies is finally beginning to ease. In the November 2021 regional elections, centrist forces that oppose sanctions and are critical of both the mainstream opposition and Maduro received three out of every five votes cast for the opposition. In a special election in Barinas, Chávez’s home state, the opposition pulled off a stunning upset by forging an alliance with local centrist groups. Building a centrist alternative to winner-take-all politics will continue to prove difficult, and those who advocate for it will not escape the crossfire. Yet it is probably the only alternative to bring the country back from the brink of a conflict that has destroyed the lives of millions of Venezuelans.

Francisco Rodríguez is a fellow at the Council on Foreign Relations. He has headed Venezuela’s Congressional Budget Office, the UN Human Development Report’s research team, and Andean Economics at Bank of America. His book Scorched Earth: The Political Economy of Venezuela’s Economic Collapse will be published in 2022.