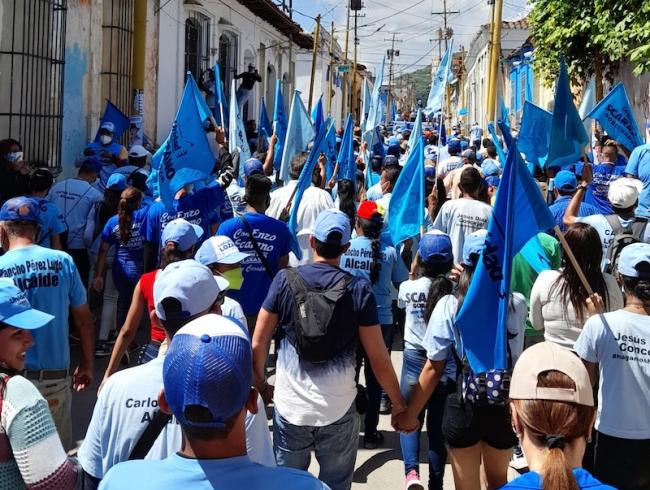 For the first time in four years, Venezuela’s main opposition parties—including those that have refused to recognize Nicolás Maduro’s government and the country’s electoral institutions, forming a kind of interim government since 2019—have decided to participate in the November 21 “mega-elections” for governors and mayors.

Acción Democrática, Un Nuevo Tiempo, Primero Justicia, and even Voluntad Popular, Juan Guaidó’s party, have come together to form a unified ticket: the Democratic Unity Roundtable (MUD). These parties have decided to field candidates for the first time since the 2017 regional elections, marking a change in strategy that could turn the page on the agonizing conflict and start a process of political normalization.

Formed in 2008, the MUD is an electoral opposition coalition that was unequivocally victorious in the 2015 parliamentary elections, when it secured a supermajority in the National Assembly. Parties then abandoned the coalition during an abstentionist phase—launched in 2017 after boycotting the creation of the National Constituent Assembly—during which they bet on toppling the government by force. In the 2017 regional elections, the parties opted to not use the MUD for strategic reasons, participating individually rather than as a unified force. In 2018, the Supreme Court disqualified the MUD from participating in elections, but in June of this year, the National Electoral Council granted it permission to participate once again.

Recent statements from Julio Borges, “foreign minister” in Juan Guaidó’s parallel government, sum up this change of strategy. “I think that we all need to be cognizant that a cycle has either already closed or is about to close regarding the template on which the struggle has been built in recent years,” he said in an interview. “The template we have used in these three years could have been successful, but due to many errors or expectations, the goal was not achieved. Trying to continue with this as if it were an end in itself is a mistake.”

Borges continued: “Today the opposition finds itself in perhaps its most difficult and most critical moment. We need to measure up. We must rebuild a path, rebuild unity, and know that we must overcome and leave aside many structures, many political narratives that have already proven that they need to be surpassed.”

Opposition leaders who had been in exile, including those who publicly pushed for the military coup on April 30, 2019, now can be seen in the streets of different regions carrying out mobilizations for their campaigns for public office. This is an important change not only in the political realm but also in the everyday lives of Venezuelans.

This all comes as, after eight years of a severe crisis and three years of financial sanctions against the government on the part of various global powers, Venezuela has seen macroeconomic improvements related to inflation and supply.

Meanwhile, the negotiations in Mexico between the government and the opposition, mediated by Norway, have come to a standstill.

The extradition of Colombian businessman Alex Saab from Cape Verde to the United States in mid-October prompted the government to withdraw from negotiations, interrupting the conversations underway since August. In the weeks preceding the extradition, Saab had been part of the government commission participating in talks in Mexico. So far, the setback in negotiations has not hindered the ongoing election campaign, but it remains to be seen how it could harm the political climate.

The Challenge of Changing the Opposition Narrative

The opposition’s political reconfiguration is a gamble based on the potential results for its national leaders and parties participating in the process. But beyond favorable election results, the opposition seeks to return to the electoral fold after abandoning the process for three consecutive elections. Through forfeit or non-participation, this position enabled Chavismo to secure near-total political hegemony in the 2017 regional elections, 2018 presidential elections, and 2020 legislative elections.

After contending with disqualified leaders, Supreme Court intervention in political parties, and arbitrary changes in voters’ designated polling stations, the opposition now focuses its struggle on securing the best possible electoral conditions for the 2021 vote—and it has made notable gains. The European Union, for instance, has committed to sending an observation mission for the first time in 15 years.

Tomás Guanipa, who served until a few weeks ago in Guadó’s interim government as “ambassador” in Colombia, has spent days campaigning in the barrios around the capital city as a candidate for mayor of Caracas, calling on the masses to vote for the MUD. In the midst of his campaign, the mayoral candidate for the most important municipality in the country said: “We do not have all the conditions we should have in a democracy, but we also have to act realistically concerning the political moment.”

In recent years, the lack of free and fair conditions has been the opposition’s main justification for boycotting elections. They have stressed that the “dictatorship” will not permit a win for anyone other than it’s electoral coalition, Gran Polo Patriótico.

“What we can do with the MUD ticket,” continued Guanipa, “is get authorization for candidates who are now running, eliminate puntos rojos [Chavista check-in points near polling stations that the governing party uses as a form of social control over voters], which is an issue we’re still working on, get new composition of polling stations, the voting system, and auditing and international observation—these are things that are happening and that are an opportunity to use our vote to exert pressure and to exercise a majority.”

The participation of the European Union electoral observation mission has generated some confidence in the opposition that arbitrary actions will not define the outcome of the vote and that the gains in conditions will continue. Such conditions will include, for instance, no last minute disqualifications of candidates nor changes to voters’ designated polling stations.

But the opposition’s main problem now is not electoral conditions—it’s rescinding the boycott they once called for. The weakness of the opposition’s current campaign stems from the fact that its shift from a narrative of abstention to one of calling for its supporters to vote may not be fully understood. The opposition has banished abstentionism from its discourse, but we still don’t know—and we won’t know until the elections—if opposition voters have followed suit.

Although few current opposition leaders explicitly call for abstention, several use hesitant language and don’t enthusiastically call for voters to cast their ballots, stressing instead the lack of conditions for elections. This leaves the potential for the opposition’s electoral base, which enabled it to sweep the legislative elections in 2015 before it formalized the boycott strategy, to not grasp the new opposition narrative, diametrically opposed to its old one, thus provoking high abstention among opposition militants. This possibility will be a leading variable in the results.

Meanwhile, the opposition faces a leadership crisis due to the political failures and corruption scandals swirling around Guaidó’s interim government, which has provoked a public conflict between opposition sectors. The conflict escalated with recent public confrontations between leaders of the parties Primero Justicia and Voluntad Popular, both members of the MUD. In addition, there are dissident opposition parties, including those of incumbent governors, that could capture decisive votes.

A Return to High Voter Turnout?

Understanding the ruling party’s decline calls for analyzing the fact that in 2015, when it faced an overwhelming defeat in the parliamentary elections, it won a million more votes than in 2020, when, paradoxically, it won. The difference between the two processes is that in 2015 abstention was 26 percent—a rate that more than doubled in 2020.

As the banner of the radical opposition in recent years, abstentionism has become Chavismo’s hope for a comfortable win.

Thanks to the opposition’s boycott strategy, based on concentrating energies to prepare for disruptive or insurrectional activities, the ruling party currently holds 19 of 23 governor seats and 310 of 335 mayoral seats in the country. On November 21, this could either stay the same or change, and the results will impact both politics in the coming years and the ongoing negotiations in Mexico. Whoever wins the electoral contest will have more power to negotiate.

As the opposition excites voters, it will win more space in terms of representation. If it manages to return to the 2015 scenario, when it secured 56 percent of the ballots amid high voter participation, it will surely secure an important majority in gubernatorial and mayoral posts. Particularly if it wins the most important offices in the country, this would flip the national political map.

By redesigning its strategy, the opposition seizes on elections as a vehicle to win power. After the regional elections, there will be the possibility for a recall referendum after 2022 and participating in the presidential elections in 2024. But the opposition still does not appear unified and strong enough to tackle these situations, especially because its leaders who are closest to Washington—such as Leopoldo López and Guaidó, as well as a conglomeration of powerful media—are not actively calling for a vote. Rather, they reiterate that there are not adequate electoral conditions, which evidently discourages voter participation, especially among the opposition’s hardcore voter base (voto duro).

This all comes amid a significant improvement in Venezuela’s economic outlook. Various economic organizations and research centers project economic growth for 2022; the Economic Commission for Latin America and the Caribbean (ECLAC), for example, calculates 1 percent growth for the first time in eight years.

Despite the trend toward political normalization, the United States and the European Union, which has sent an election observation mission, have not lifted financial sanctions nor given signs of shifting their positions on the matter. This hinders economic normalization as problems regarding fuel supply and the state petroleum company’s inability to sell oil continue.