In the United States, this Sunday marks the 10th anniversary of the September 11th attacks. In 2001, then president George W. Bush quickly responded by launching his global War on Terror. It is still ongoing. The Afghan war has become the longest war in U.S. history. Military and civilian casualties rise each year, and its effects reach far beyond the Middle East. Over the last decade NACLA has dedicated three reports to the U.S. War on Terror and its impact on Latin America and immigrant communities in the United States: After the Cold War In the Wake of the Terror: Bush II in the Americas (Nov./Dec. 2001), War on Terror, Target: Americas (May/June 2005), Terror Incognito: Immigrants and the Homeland Security State (Nov/Dec 2008). 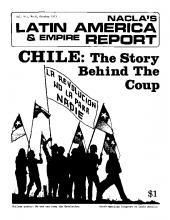 October 1973 NACLA ReportIn Latin America, however, September 11 has an even longer and bloodier history. On this day, in 1973, Augusto Pinochet overthrew the democratically-elected Chilean president Salvador Allende. Pinochet went on to install a brutal 17-year U.S.-backed dictatorship that would imprison, torture, kill, and disappear thousands. In commemoration of September 11, we have pulled from the NACLA archives. The following is the introduction to the October 1973 NACLA Report, written only weeks after the Pinochet coup and entitled, “Chile: The Story Behind the Coup.” To read the complete report, you can visit our archives.

As individuals and as NACLA staff members, we have experienced the recent coup in Chile as one of the most painful events of our lives. We feel this blow against the Chilean people, and against the estimated 15,000 Latin American exiles living in Chile, directly and personally as a blow against us all. We are saddened by the brutality of the coup, heartened by the resistance, and more committed than ever to continue our work.

For us this is a time of exposing U.S. involvement in the coup and of learning about the struggle for socialism and human dignity in Latin America. It is clear that U.S. policy-makers and corporate executives have adapted their tactics to the changing situation in Latin America and have become more sophisticated. But few are fooled by the Nixon Doctrine of a "low U.S. profile."

The brutality of the Chilean coup shocks us; but it also shows us the desperation of the Latin American Right and the U.S. corporate and government policy-makers. For it is clear that this massive brutality is their only response to the mass politicization and mobilization that occurred during the past three years. The mobilization of the Chilean Right did not intimidate or divide the Chilean workers, but indeed stimulated their further political organization. In short, the severe repression now must be seen as part of the advanced and continuing class struggle in Chile. Even during the heaviest attacks by the military, thousands resisted, and reports indicate that a long-term resistance is developing.

The setback for those who were attempting to lay the bases for socialism through electoral means in Chile suggests that the ballot alone cannot preserve the gains won by the people; at the same time, other forms of organization must take place among the people, to prepare for the inevitable attack by the Right. Even as we see the violence with which the Chilean Right is lashing out, we can also see the tremendous problems it faces in attempting to reverse a long process of social revolution in Chile. First, the very process by which the new regime must keep order is also a process which will isolate it progressively from all non-fascist forces in Chile (including some Christian Democrats). More important, decades of organization by the Left cannot be wiped out by decree.

Second, the junta has made clear its intention to reverse a long historical process of socialization of the economy—a process begun long before Allende took power. Even the pretense of restoring a "free enterprise" economy, wide-open to foreign investors, to a country that has been moving toward socialism could not be maintained without one crucial factor: U.S. economic and military aid. Past experience—in Guatemala in 1954, in Brazil in 1964, in the Dominican Republic in 1965—has shown that governments in this situation could not survive or deal with the contradictions in their policies without massive foreign aid. Just as aid was a potent U.S. weapon in creating an economic squeeze for the Allende government, so too the U.S. will use aid in attempting to keep the rightist government in power. We can expect much of this aid to come indirectly through U.S.-controlled "international" agencies and through Brazil, which has assumed the role of policing Latin America to protect U.S. corporate interests.

Beyond Chile, we see the significance of this event for all Latin America. Clearly the coup was aimed not only at the Chilean Left, but at all Left and progressive movements on the continent. It was, moreover, a further attempt to isolate the only socialist country, Cuba, and the remaining nationalist governments in Latin America. This experience reminds us that there is no "safe haven" for anyone in Latin America until the entire continent is free.

We are also learning a great deal about our own role and responsibilities as North Americans. Watergate and Cambodia have left many Americans skeptical about official U.S. government statements and receptive to more critical explanations of U.S. operations abroad. Since they cannot learn the full story from the U.S. mass media, we find a growing interest in and demand for our work and for other alternative sources of information. Moreover, in contrast with the situation 19 years ago, when few Americans spoke out against U.S. intervention in Guatemala, the U.S. government today must expect such actions to be met by loud protest at home.

Thus, we see many opportunities to act with a wide variety of constituencies, including labor, churches, community organizations and Congress. We see a few clear tasks for ourselves:

1) Continue the work on behalf of Chilean political prisoners and the Latin American political exiles who were living in Chile.

2) Take all opportunities to expose the role of the U.S. in the coup and its aftermath. In particular, we must wage a long-range campaign against military and economic aid from the U.S. and U.S.-dominated "international" agencies, making clear that these are but the support structures for private corporations. Only with a strong anti-aid lobby can we deny the Chilean government the foreign assistance it will need to survive.

3) Become educators and take on special responsibilities to counter the public relations campaign that has already begun on behalf of the new government. When the Chilean government sends spokesmen to the U.S. to "explain" the coup to the American people, for example, we will have many opportunities to
present the other side of the picture.

Through these actions, we can show concretely our support for the resistance in Chile.

NACLA continued to cover Chile and the Pinochet regime extensively over the years.

The following are just few of those issues.

Chile: Beyond the Darkest Decade (September/October 1983)

Twilight of the General: Chile After the Arrest of Pinochet (May/June 1999)