There was no single message to be culled from the region’s election results last year. Elections held in five American countries did, however, suggest the shapes of some alternative American futures.

The voters have spoken. What now?

Elections held in five American countries this past year raised some tantalizing questions and suggested some possibilities—some hopeful and some discomfiting—for the shape of the Latin American and inter-American future.

First, there’s El Salvador. There, in March 2012, the former guerrillas of the Farabundo Martí Liberation Front (FMLN) lost several municipal elections to the country’s authoritarian right, but remain the principal political force in the country. Perhaps more noteworthy, while they continue to face an iron-fisted adversary, the FMLN remains committed to the electoral road to social transformation.

Later in the year, in one of the world’s most closely watched elections, U.S. voters denied the presidency to the far right but reelected a president whose goals and beliefs—especially regarding Latin America and Latin Americans—remain largely unstated, unknown, and, it would seem, not particularly progressive. As of now, for example, the U.S.-sponsored drug war in Latin American countries appears likely to persist, as does the current closed-door policy toward Latino immigrants. Worse yet, even as democratic processes are becoming rooted in much of the Americas, the legitimacy of the U.S. electoral process is being threatened by the billions of dollars spent—or better said, invested—in senatorial and presidential campaigns. 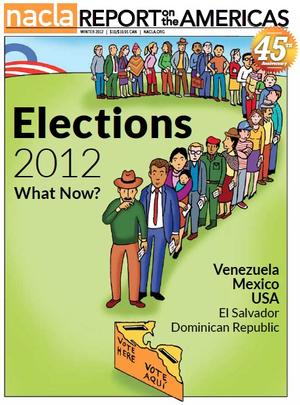 And, finally, the two high-profile Latin American presidential decisions: Venezuela and Mexico. Voters in Venezuela ratified Hugo Chávez’s leadership, though as of this writing, his uncertain health leaves some doubt about whether he will serve out a full six-year term. Physical well being aside, there are some important differences between Chávez the strong-willed, revolutionary president and Chavismo, the set of programs and policies he has set in motion, as Daniel Hellinger and Margarita López Maya imply in their respective nuanced report (“Chávez and the Intellectuals,” Page 51) and strong critique (“A Dissenting Opinion,” Page 53). Did voters perceive that distinction when they reelected Chávez after 14 years? We don’t really know—but it doesn’t seem to matter. Both Chavismo and its creator remain popular; the Chavistas won handily in December’s gubernatorial elections, two months after the presidential contest.

What we can assert with surety is that Chavismo has relegitimized the electoral process in Venezuela and, perhaps, throughout the region, given its strong influence on the Latin American left. As Gregory Wilpert tells us on page 39, Chávez’s motives for seeking to remain in power via transparent and efficient electoral processes are diverse, and one of the strongest may be his desire to endow his Bolivarian movement with a healthy dose of legitimate, internationally recognized political power. Whatever the reasons, and whatever the reader of these lines may think of the Chavista style of governing, over his 14 years in office, the Venezuelan president has without doubt resuscitated an electoral process that had gone stale and corrupt, and transformed it into a vibrant system of which his followers are justifiably proud. This is no small feat in a country that, for 40 years, held elections in name only, with two power-sharing centrist parties serving alternating terms in the executive, to the exclusion of all other political forces.

It is also no small thing that free and fair elections in Venezuela should be used to promote radical change, rather than quiescent stability. It is often remarked that elections (“free and fair” or otherwise) serve not only to choose among candidates for public office but also to grant a measure of legitimacy to the state or ruling government. Thus we associate periodic, legitimate elections with political stability. Also thus, the recent U.S. concern with periodic elections as a means to promote stability—for better or worse—in the region; this political emphasis is mirrored by an academic concern among political scientists. As Greg Morton expresses it in this report, [The academic focus] on stability [has become] more a concern about ensuring and consolidating formal democracy–holding clean elections, introducing liberal individual rights, creating participatory citizenship–all of which is distinct from popular democracy, which is based on the introduction and extension of socio-economic rights.

Clearly, free and transparent elections are not the be-all and end-all of political democracy—not to mention social democracy. Though it has frequently served as an important safeguard against authoritarian rule, electoral democracy does not, in and of itself, guarantee popular participation in governmental decision-making. When groups within civil society exercise political democracy, the result probably has more consequence for individual freedoms, political participation, and communal solidarity than when one candidate or another is elected to governmental power. Nonetheless, periodic free-and-fair elections—or elections that are, at least, perceived to be free and fair—do bring a certain level of both democratic legitimacy and political stability to a political regime.

That perception was severely tested in Mexico in July, when voters brought the once long-ruling Institutional Revolutionary Party (PRI) back to power. The people gave 46-year-old Enrique Peña Nieto of the old corporatist party (and its dubious democratic bona fides) 38% of the vote in a three-way presidential race. The victory of the PRI, combined with its questionable adherence to Mexican campaign rules, cast doubt on the legitimacy of the process.

Though the official vote was ratified by Mexico’s Federal Electoral Institute (IFE) within a month of the election, the candidate of the left-of-center Party of the Democratic Revolution (PRD), Andrés Manuel López Obrador, refused to concede defeat. As he did in 2006, AMLO, as he is known, alleged various frauds in the electoral process, ranging from vote buying to ballot miscounting. No doubt motivated by the more obvious fraud of the last election, which deprived him of the presidency—and by the even clearer fraud of 1988 (later admitted to by its perpetrators), which kept then-PRD candidate Cuauhtémoc Cárdenas out of office—AMLO vowed to keep his campaign going in the streets and via civil-society organizations. Several groups, including the radical student movement, #YoSoy132, featured in our fall 2012 issue, soon joined his campaign to delegitimize the PRI candidate and official victor, Peña Nieto.

On December 1, as Peña Nieto was sworn into office in the Federal Chamber of Deputies in Mexico City, the streets of the capital were redolent with tear gas and riddled with rubber bullets as municipal and federal police countered what began as a nonviolent protest. Many observers remarked that the violence appeared to be provoked by Federal Police, now under the command of the incoming PRI. If so, their actions may have been intended to show demonstrators that the old PRI was back in charge, perhaps providing a foretaste of how the party intends to respond to public dissent, in its new six-year term in office.

Legitimacy, however, is a curious phenomenon. It implies little about the democratic nature of a ruler or regime; rather, it refers to public acceptance. If authorities stuff the ballot boxes, threaten voters with reprisal, bribe them with free groceries, or any other such coercion, then electoral democracy becomes illegitimate because the authorities have violated the agreed-upon rules of the game. Yet many political regimes in countries lacking free elections recognize no such rules; they may nonetheless build legitimate acceptance of their reign by other means—perhaps the divine or historical right of rulers, the wisdom of the party, or its strategic ability to “deliver the goods.”

Mexico, under one-party rule from 1929 until a victory by the opposition PAN in 2000, made no pretence (until very recently) of holding fair elections. Nonetheless, the nation enjoyed a certain political stability precisely because of the ruling party’s ability to threaten (and enact) selective violence and, most importantly in a poor country, deliver the goods.

Finally, as Stephen Maher writes in this report (“Elections, Imperialism, Socialism and Democracy,” Page 59), it was not so long ago that Latin American revolutionaries disdained the electoral process entirely. Following the midcentury overthrow of democratically elected leftist governments in countries like Guatemala, the Dominican Republic, and Chile, many on the left felt that only the armed construction of a new state apparatus could bring about the kind of social change that might elevate the great mass of their populations out of hunger and poverty. Elected governments that left other state structures intact, this view held, could operate only within strict limits of permissible action and discourse—action and discourse that could not make fundamental changes to political and economic structures—if they were to remain in office. Real change required rule by a strong hand, intolerant of any meaningful dissent

Democratic socialists who opposed this view (Salvador Allende, for example) accepted its validity to a certain extent. Allende always knew that the Chilean military, backed by U.S. military and economic power, was capable of overthrowing a government whose policies threatened the interests of the country’s—and hemisphere’s—elites. Allende simply countered that the democratic freedoms historically championed by the left necessarily encompassed freedom of thought, expression, and of assembly, and that abandoning these principles in the struggle for power—and the administration of power—inevitably led to the corruption of the socialist struggle itself, and its transformation into the struggle for pure power.

Thanks, in part, to the successful Chavista use of transparent elections to embark on a program of social transformation, a large part of the Latin American left has now embraced the nonviolent electoral process. The democratic bar has been raised in the region. Mexico’s PRI, on the other hand, with political roots in the Mexican Revolution, has long since abandoned whatever idealism it started out with and has become a party that struggles for and administers pure power.

There is no single message in the elections of 2012. It will be interesting to see how the fallout plays itself out over the coming years, here in the United States and south of the Río Bravo.