Central America: Between Past and Present

The following is the Editor's Note from the Spring 2012 issue of the NACLA Report on the Americas, "Central America: Legacies of War." The full issue is now available here.

On March 23, 1982, Guatemalan general Efraín Ríos Montt overthrew President Romeo Lucas García. The new military junta suspended the Constitution, closed the legislature, and installed one of the bloodiest military regimes in Guatemalan history. Ríos Montt launched “counterinsurgency” operations that killed thousands of innocent Guatemalans in only a few months. In 1982, Amnesty International estimated that by July of that year, 10,000 indigenous people were killed and 100,000 displaced from their homes. The following December, U.S. president Ronald Reagan called Ríos Montt “a man of great personal integrity and commitment” who wants to “promote social justice.” 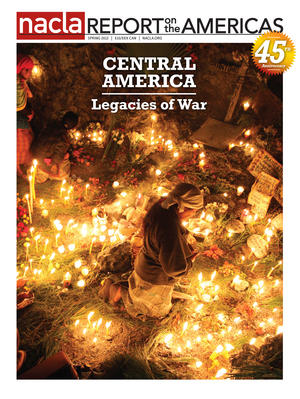 The Spring 2012 NACLA Report on the AmericasMeanwhile, in El Salvador, death squads disappeared activists with impunity as the U.S.-backed government fought the guerrilla forces of the Farabundo Martí Liberation Front (FMLN). In Nicaragua, the U.S. sought to overthrow the Sandinista National Liberation Front (FSLN), which had overthrown the U.S.-backed Somoza dictatorship in 1979, by training and funding the Contras in neighboring Honduras. Solidarity activists in the United States opposed U.S. support for the repressive regimes and paramilitary forces. Thousands marched in the streets. Others traveled on delegations to Nicaragua and elsewhere. NACLA published report after report on the region.

Thirty years later, for the first issue of our 45th anniversary volume, we look to the legacies of war in Central America. Time has brought both exciting opportunities for justice and the rise of heavy-handed mano dura (iron fist) policies to counter drug trafficking and violent crime in the region. The reality is complex, and like this issue, the themes are varied. We aim to explore the changes and the violence, the contradictions and the dualities.

For example, in Guatemala, Judge Carol Patricia Flores formally charged Ríos Montt with genocide and crimes against humanity on January 26. He now faces the possibility of a criminal trial. That same month, however, saw the presidential inauguration of former general Otto Pérez Molina, who is himself suspected of human rights abuses and has committed to ushering in a wave of hard-line crime-fighting policies. In Honduras, the history of military coups, repression, and complete impunity is being relived under the government of Porfirio Lobo, who won the presidency in a questionable election on the heels of the 2009 coup d’état.

On the opposite end of the political spectrum, the former guerrillas, the FMLN and the Sandinistas, are in office in El Salvador and Nicaragua. But the FMLN administration of Mauricio Funes now appears to be bending to U.S. pressure for a return to hard-line security policies. The shift is blurring the line between the military and the police—a frightening step on the 20th anniversary of the country’s Peace Accords, which ended the 12-year civil war. Nicaragua has long stood out as less violent than its northern neighbors, but this is shifting. Two thousand and ten saw the first drug cartel execution-style killings in Nicaragua and the government of Daniel Ortega recently deployed over 1,000 soldiers into the countryside ostensibly to deal with gangs.

Violence is on the rise, as are gangs, drug trafficking, private militarized security firms, and a spillover from the drug wars in Colombia and Mexico. Honduras now registers the highest homicide rate on the planet, with Guatemala and El Salvador close behind. The United States is promoting a regional strategy for security. As in the 1980s, local communities are caught in the middle.

You will note that this issue of the NACLA Report on the Americas looks different. In honor of our 45th anniversary, we have redesigned the magazine and gone to a quarterly publishing schedule, nearly doubling the page count while dedicating more energy to our website, nacla.org, with blogs, photo essays, podcasts, video, and more. We are also pleased to present a powerful photo retrospective of Central American images from our archives, and the winning photographs from our first ever photo contest. We close with our new “In the Journals” section, where we review a number of recent essays from related periodicals, and an article from the NACLA archives.

In this issue we look to straddle the line between the past and the present—introducing a new look for the NACLA Report in 2012, and remembering a past that profoundly marked both our readers and this organization.

Michael Fox is the editor of the NACLA Report on the Americas. Read the full issue. To subscribe to NACLA visit nacla.org/subscriptions.