Migration Is Not a Crime 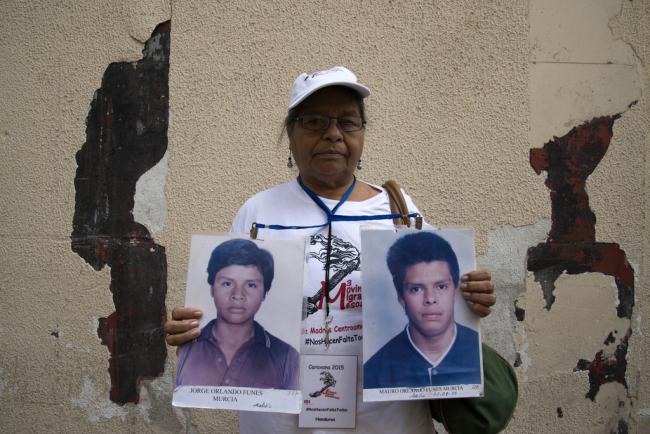 This article is the first in a four-part NACLA series on migration in the Americas. Read the next installments here, here, and here).

The first one left at 17, with her blessing. The second didn’t ask if he could go, he just went.

Both went missing, lost in transit, somewhere in Mexico, as they made their way to the United States from Honduras.

On a cold December morning, Clementina Murcia González walked the streets of Coatzacoalcos, a port city in the southern part of the Mexican state of Veracruz, searching for her two sons, Jorge and Mauro, their pictures on her chest, her hands trembling.

She was one of some 40 Central American mothers that took part in a caravan travelling through southern Mexico, visiting prisons, shelters, as well as other spots along the migrant route, looking for missing sons and daughters.

Priscila Rodríguez Cartagena, a grandmother from Honduras, searched for her daughter, Yesenia Marleni, who disappeared in 2008, when she was 19.

“She lives in my heart,” she told me. “If she can hear me, I want her to know that I love her, that I miss her, that I will not have peace until I find her. When I look after my family, I think of her. I wonder, is she eating, or not eating? Is she alive?” 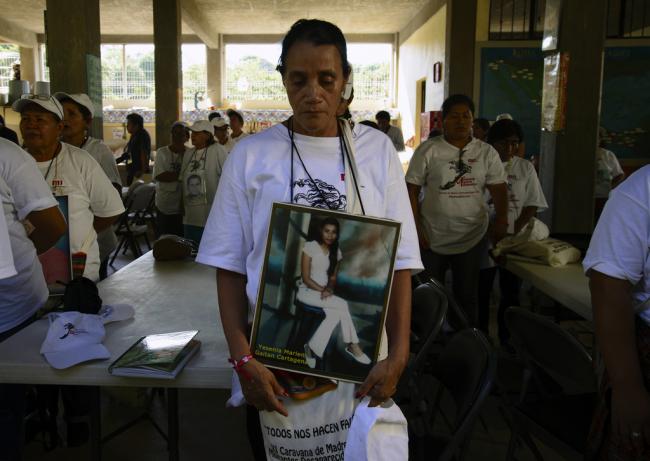 While attention is focused on the thousands fleeing Syria, Libya, and Iraq, the United Nations refugee agency has warned that a new refugee crisis is taking shape in Central America. The UN reports a nearly fivefold increase, since 2008, in asylum-seekers arriving to the United States from the Northern Triangle region of El Salvador, Guatemala, and Honduras, which has the world’s highest murder rates.

The forcibly displaced are part of a global trend — by the summer of 2015, more than 60 million people had been forced from their homes as a result of persecution, conflict, violence, or human rights violations, according to the UN refugee agency. More than 700,000 of the displaced were in the Americas.

The plight of Central Americans is particularly dire. Although no official figures exist, it is thought that at least 70,000 migrants and refugees have gone missing in Mexico since 2006. And yet, it is a cumbersome task assessing exactly how many have perished, because no one is counting, or identifying the dead, according to Rubén Figueroa of Movimiento Migrante Mesaomericano, the organization behind the mothers’ caravan.

“There are graves all along the migrant route,” Figueroa told me. “There are no data bases, no information banks. For the families, these people have disappeared. No one knows what happened to them, because there is no official count, no official procedure to have them identified — this is a policy of not counting, of not wanting to know what is happening to the people on the migrant route. It’s very hard to understand, but it’s a reality.”

One sunny morning, “La 72” — a migrant shelter in Tenosique, Tabasco, on the border with Guatemala — was brimming with families, small children and babies, desperate women and men trying to figure out what to do next, how to hop on the cargo train they call ‘The Beast,’ how to evade the multiple checkpoints, how to head north. I spoke to a man who said he had been bound and robbed after crossing the border. Three women had been raped on a dirt road, just a few minutes from the shelter.

The typical person making the trek has changed drastically in the last few years, explained Ramón Márquez, who coordinates “La 72.”

“They are escaping death, they are what we call refugees,” he said. “These are entire families, mothers with children, young women who are pregnant, unaccompanied children and teenagers; we’re even seeing senior citizens.”

One of the children at “La 72” was Brian Jair, a nine-year-old who fled Honduras with his mother after receiving death threats from a gang demanding a “war tax.” His father and two older brothers were hiding in Honduras, he said. They had returned to their corn field one morning, and found it cut with machetes.

“They said that if we didn’t pay them they would kill us,” the boy said. “They had tattoos, like dragons, with snakes coming out of their mouths, they had guns.”

The number of women with children, escaping violence in El Salvador, Honduras, and Guatemala is rising, the UN reports. In 2014, more than 66,000 families travelled to the United States from Mexico and the Northern Triangle region.

As a result, these stories are becoming increasingly common. Nearing the end of 2015, the migrant shelter in Tenosique had received 8,500 migrants, including 720 children. To illustrate this reality, Márquez recalled a mother and two children who arrived at the shelter, in the middle of the night. They had been threatened by a gang, and their house had been burned to the ground.

“From one day to the next, they had to flee,” he said.

A week later, relatives of the same family arrived at the shelter, after the gangs extended the threat to the entire family network.

Many leave because they are being extorted; others are being threatened. They have no other choice. If they are to save their lives, they have to migrate, Rodríguez Cartagena explained.

“But there is no salvation, anywhere,” she said. “If they leave their countries, looking for a better life, they come through Mexico, and here they find death.”

As the world focuses on the wars in Syria, Libya and Iraq, Figueroa said those fleeing Central America deserve protection as well.

“The context of violence is similar,” he told me. “In our continent, the dead are in the thousands. We may not have bombs going off, but blood is shed all the same. This is a context of undeclared war.”

In fact, it is government policy that has turned migrants into prey for criminal gangs, activists say, citing Mexico’s Frontera Sur program as a prime example. Aiming to stem the flow of Central Americans entering the United States, President Enrique Peña Nieto introduced the initiative in July 2014. Under the program, Mexico increased checkpoints, tightened border controls, and used troops to actively discourage migrants from riding ‘The Beast.’

In 2015, Mexico deported 178,254 people, most of them Central Americans on their way to the United States, the highest total since 2006, according to official figures. Mexico estimates that some 300,000 migrants pass through its territory yearly, with nearly 200,000 detained in transit during 2015.

Unable to get on the train, or ride the highways, now sprinkled with checkpoints, migrants have been forced to travel along alternate routes, making them more vulnerable to kidnappings, rapes, extortion demands, and murder.

“This is a policy of persecution,” Figueroa said. “It hides migrants, it forces them to flee into the hills, it makes them invisible, and it makes them vulnerable to organized crime.”

The number of Central Americans reaching the United States did fall, but complaints of abuse at the hands of Mexican officials shot up around 40 per cent, according to data obtained by Reuters.

“So long as the migrants are forced to disperse and pursue other means, they are left unprotected, exposed to whatever they find on the road,” said Marta Sanchez Soler, who leads Movimiento Migrante Measoamericano.

The exodus is particularly trying on women, according to Ana Claribel Mendoza, whose son, Marvin Alberto Guerra Gomez, went missing in Mexico in 2013.

“It is women who suffer the most,” she told me. “When someone leaves, they leave a mother, a grandmother, or a wife, with the kids, and we’re the ones who have to struggle alone. I tell you that this pain turns into anger when we have to look for the ones that have gone missing.” 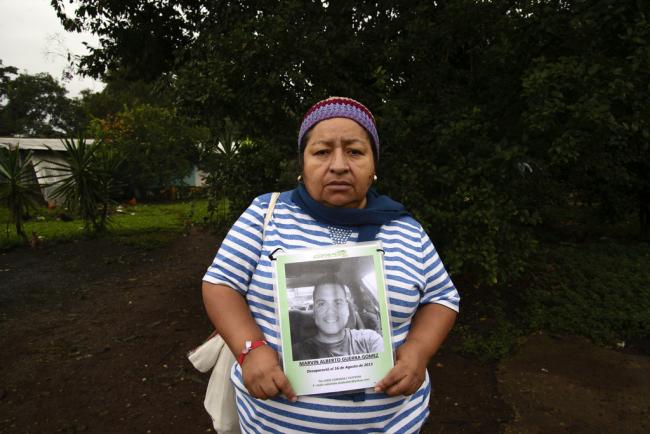 Mendoza believes that, in the end, migrants and refugees are a source of income, and as long as the flow of remittances to the home countries isn’t disturbed, nothing is going to change.

“Our governments only see the remittances,” Mendoza said, adding that the task of finding missing migrants should be something governments do, not aging mothers.

Remittances to Latin America reached an all-time high in 2014, a whopping $65.38 billion, with Mexico, El Salvador, Guatemala, and Honduras accounting for more than half of the total, according to the Inter-American Bank Development Bank, which provides development financing in the region.

The reality is that the migrant body, in the form of the forcibly displaced, constitutes a new type of human merchandise, added Figueroa.

“Migrants are merchandise for government and organized crime,” he told me. “From the moment they leave their home countries, they are victims of human traffic, victims of kidnappings, all of which generate revenues. And if they do make it to the United States, they work and they send remittances and someone generates revenue from their labor, whether it’s in taxes or transfer charges.”

“The American Dream is Death”

Despite the odds and the creeping danger, many migrants say they have no choice but to attempt to reach the United States. At a shelter in Palenque, in the Mexican state of Chiapas, Dina del Carmen Ramos wept as she described the murder of her husband and child during a robbery in Puerto San José, Guatemala.

“The truth is that this road is hard,” she told me. “The American dream is death.”

Standing outside the shelter, in Palenque, Jorge Eduardo Molina Mancia, 16, said he was travelling unaccompanied with his sister. Death was around the corner, he conceded, but he, too, was chasing his own American dream. 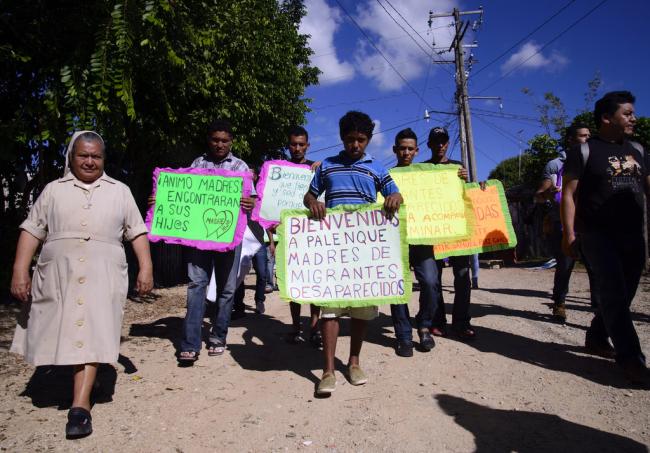 During a visit to a penitentiary in Tabasco, Murcia González met a Honduran migrant who had been imprisoned for six years, unable to reach his family the entire time.

“I know the area where he’s from,” she said, waving her hands. “I have the name of his mother, and I’m personally going to visit that family. Think about it: what is that mother thinking? My son is dead, and thank God he’s in a prison, because at least he’s alive, because that’s more than enough, finding them alive.”

“Even if I told them, as a mother, not to do it, they have to make the trip,” she said, clutching the photos of her two missing sons. “I will tell you one thing, to the people in the United States: For them it’s a crime that people migrate, but for us it isn’t.

“So I say to those who find the courage to make this trip, I say to them, pray to God, and go on your way, because to migrate is not a crime.”

Federico Barahona is a Québec-based writer, translator, and photographer, as well as associate editor at SNEEZE Magazine. Follow him on Twitter @avenidaonce.