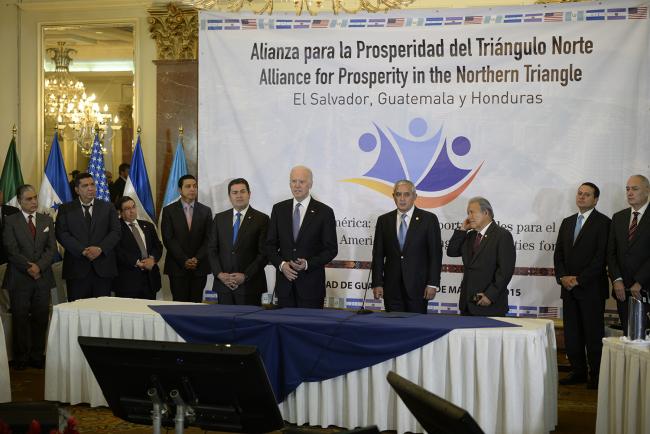 In December of last year, the United States Congress approved $750 million worth of funding for the “Alliance for Prosperity Plan,” (APP) primarily aimed at curbing migration flows to the U.S. from the countries of Central America’s Northern Triangle – El Salvador, Guatemala, and Honduras. With the plan’s first year coming to an end, it is a good moment to evaluate the APP and revisit its flaws and points of improvement.

The main motivation for the U.S. to aid the Northern Triangle countries is to deter the huge flows of migrants and asylum-seekers that try to cross the U.S.-Mexico border. Around 200,000 people leave the region yearly, of which roughly 120,000 arrive in the U.S. In addition, a substantial group of child asylum-seekers flee each year— roughly 100,000 in 2015 alone— which has precipitated an ongoing humanitarian crisis due to these children’s vulnerability to abuse and exploitation. To stop this influx, the APP focuses on stimulating business to create new employment opportunities for Central Americans, increase security by combatting corruption, fight crime, facilitate access to legal systems, and improve people’s trust in the state. Importantly, the APP, unlike previous U.S. plans targeting the region, acknowledges that the root causes of migration derive from insecurity and lack of economic opportunity.

Though this assumption is correct and repeatedly confirmed by surveys carried out among refugees and potential refugees, the measures taken do not seem to adequately address the problem. First, reports of migrant flows since the commencement of the APP show no decrease in total numbers of entries. While fewer migrants managed to reach the U.S. border between 2015 and 2016, this has mostly been a consequence of increased Mexican border enforcement via the Southern Border Plan, which has simply pushed the issue away from the U.S. border without actually addressing the problem. But the decrease in arrivals to the U.S. turned out to be only temporary and numbers are expected to increase again this year, suggesting both that smugglers have found a way around Mexico’s border patrol infrastructure, and that the underlying motivations for emigration have scarcely changed.

When looking at previous models for APP, it is unsurprising that its approach has not been and will not be effective.  The program is similar to previous regional security programs funded by the U.S. in that it combines military and security aid with a neoliberal reform agenda. APP adds to funding via the Central American Regional Security Initiative (CARSI), explicitly modeled after the Mérida Initiative in Mexico and Plan Colombia. CARSI is largely responsible for the militarization of the fight against drug cartels and organized crime. CARSI has clearly not resulted in greater security, as levels of violence remain extremely high in Central America. The U.S. government often praises these programs for their results while human rights activists strongly disagree, pointing to the detrimental effects the policies have had on the poor and vulnerable in society. Plan Colombia and the Mérida Initiative, both of which also included a huge financial injection to the armed forces, arguably led to more violence and insecurity.

In addition to the $30 million that has gone to military financing, education, and training, the APP also includes $222 million for international narcotics control and law enforcement. The most worrying aspects of the APP are precisely the similarities it shares with its predecessors, namely the emphasis on attracting foreign direct investment and focus on bolstering security capabilities of the region’s armed forces in countries with high levels of corruption, limited accountability, and recent histories of militarization.

Attracting investment usually means easing the regulations for transnational companies to enter the country, often leading to the exploitation of natural resources and environmental and indigenous rights violations. Though its advocates argue that such foreign investment potentially creates employment, these are usually unstable and very poorly paid maquiladora-type jobs that do not generate the supposed economic incentives for potential migrants to stay.

Similarly, the APP intends to increase jobs in the agricultural and tourism sector, but how such jobs are supposed to curb migration is unclear. Those who migrate are predominantly from the lower-middle income group, living off approximately $3,000 a year. With salaries in the agricultural and tourism sector averaging around $250 per month, these can hardly solve the problem. Economic migrants are more likely leaving due to low salaries, not because of lack of work. In fact, the neoliberal reforms proposed by the APP often lead to lower wages and rising inequality which would cause an increase, not a decrease, in migration. 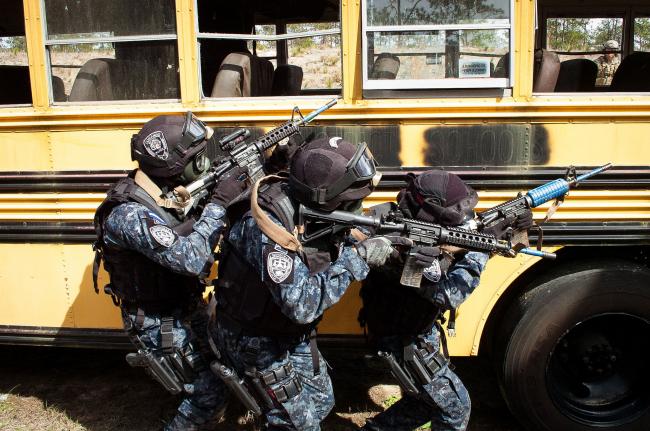 The focus on security is also a reason for concern. Violence and insecurity have in recent years been the most important factor driving Central American migration. According to a study by the American Immigration Council, victims of crimes have a much stronger desire to migrate. Levels of insecurity, violence, and crime have remained extremely high in El Salvador, Guatemala, and Honduras. The countries experience rampant gang violence and high homicide rates—El Salvador even has the unenviable distinction of being the most violent country in the Western Hemisphere, according to recent statistics. A 2015 study conducted by the UN High Commissioner for Refugees (UNHCR) found that gang-related violence is the main reason women flee their home countries. Furthermore, many Central Americans are driven to migrate due to domestic violence and extortion. High levels of domestic violence could account for recent increases in the number of women and child migrants, while the magnitude of extortion— Salvadorans, Guatemalans, and Hondurans pay an estimated $400 million, $61 million, and $200 million in extortions per year, respectively— illustrates the difficulties of running a small business. Those who do not pay their extorters so-called “gang taxes” often end up paying with their lives. Simply providing more funds to the armed forces will do nothing to protect potential migrants from these various forms of violence.

In fact, besides not having any clear positive effect, funding the armed forces runs the risk of actually exacerbating violence. In all three countries that fall under the APP, the police and military have appalling human rights records. Earlier this year the ex-head of forensics in El Salvador stated he thought it very likely the police engaged in extrajudicial executions of suspected gang members. In March, environmental activist Berta Cáceres was murdered in Honduras after receiving 33 death threats. A former soldier of the Honduran military said Cáceres’ name was on a military hit list and that he is convinced the military carried out the assassination. Similarly, Human Rights Watch stated in its World Report 2016 that human rights defenders, journalists, and trade unionists are regular targets of violent attacks in Guatemala, as Parker Asmann recently wrote for NACLA.

All of this said, significant efforts to fight against corruption should be acknowledged. The resignation of Guatemalan president Otto Pérez Molina in 2015, swiftly followed by his indictment for corruption, illicit association, and bribery, was a major victory for the International Commission Against Impunity in Guatemala (CICIG). Similar commissions have been established in El Salvador, in cooperation with the United Nations Office on Drugs and Crime (UNODC), and in Honduras, with involvement of the OAS. However, neither the Salvadoran nor Honduran anti-corruption efforts have the same prosecutorial power as CICIG, limiting their potential effectiveness in combating impunity.

At the same time, such initiatives demonstrate the massive task ahead. Skeptics have pointed out that the anti-corruption commissions have at times catered their efforts to U.S. policymakers in an attempt to meet U.S. human rights standards that condition the disbursement of aid packages, without actually addressing the root issues. In the meantime, impunity remains at record levels of 95 percent or more, according to a 2015 Wilson Center report. Also this year, reports of rising crime levels, high impunity, and extra-judicial killings of gang members by police have emerged.

Before the implementation of the APP, the presidents of the U.S., El Salvador, Guatemala, Honduras, and Mexico received a warning, in the form of an open letter signed by over fifty civil society organizations from numerous countries in the Americas and Europe, that the plan would fail if the plan’s social and economic aspects were ignored. The letter identified the “militarization of citizen security” and “harmful, private- and foreign-investor-led development policies“ as two major causes of forced migration, and concluded that the APP would only deepen the conditions of poverty and violence that lead people to flee their native countries.

One year later, those warnings ring truer than ever. If U.S. funding for Central America is to continue, an approach that does more than address the symptoms of migration by focusing on neoliberal economic policies is needed. Instead of attracting foreign investment as its main goal, the APP should focus more heavily on education and creating alternatives to the cycle of gang recruitment and violence.

Ironically, even if the APP, in its current form, were to be successful in addressing the push factors of migration, it would not have lasting impacts on pull factors, because the Northern Triangle depends economically on remittances from the United States. But the APP does not take into account the positive effect of migration on a sending nation’s development, a well-established phenomenon in migration studies. Huge inflows of remittances, diaspora tourism, and other economic consequences of migration account for approximately 20 percent of GDP in El Salvador, Guatemala, and Honduras. Less migration could lower GDP, result in even less economic opportunity and more crime, with renewed migration as a consequence.

These circumstances obviously need to be addressed in order to give potential migrants a “right to stay home.” They also demonstrate why the 2014 “Know the Facts” campaign that tried to deter migrants from traveling to the U.S. by raising awareness about the dangers of the trip completely missed the point. The value of life is simply higher than the costs of the trip, and that is why migrants keep coming.

If the APP is to tackle the migration flows to the U.S .by improving living conditions in El Salvador, Guatemala, and Honduras, the plan should shift its focus from the militarization of security and neoliberal economic reforms to a much more social approach. If not, the APP’s chances of success are minimal and the plan is likely to end up like many of its predecessors: as a U.S.-financed project for Latin America that benefitted corrupt and established elites and large corporations while further exacerbating the harsh living conditions of the poor. With no other option, these communities will keep searching for a better life, and that search will continue to lead north to the U.S.-Mexico border.

Quintijn Kat is a PhD student at the Institute of the Americas, University College London, researching the causes of decline of U.S. hegemony in Latin America since the end of the Cold War. Particularly he looks at the interaction between failure of U.S. foreign policy in the region and Latin American cooperation initiatives that exclude the U.S. He is also a member of the UCL Americas Research Network.