Democracy in Crisis: A Brazil Syllabus

Ahead of Brazil's election Sunday, a look at the context and recent history of Brazil's beleaguered politics 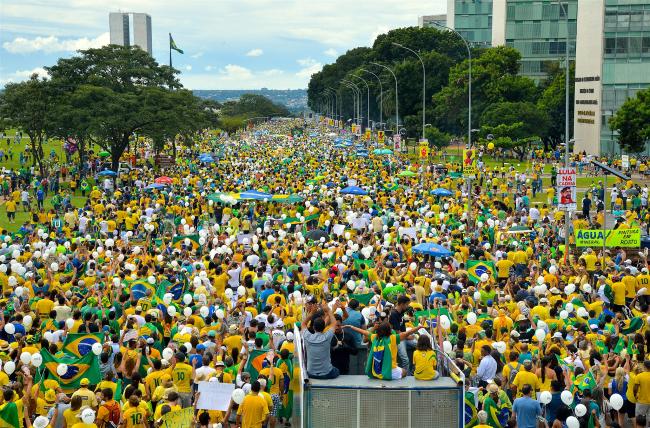 Brazil's upcoming second-round elections on Sunday point to the likely win for neo-fascist candidate Jair Bolsonaro over Workers' Party (PT) candidate Fernando Haddad. Brazil has fallen into a deep political and economic crisis since 2014, which has called the tenuous roots of Brazilian democracy into question. Since the impeachment of Dilma Rousseff in 2016, which resulted in a coup, Brazil has spiraled more deeply. Its deeply unpopular unelected president, Michel Temer of the rightwing Brazilian Democratic Movement (PMDB) party, has driven the country into austerity, as a political offensive veiled in the guise of anti-corruption has all but destroyed the Workers' Party, this year managing to convict, imprison, and bar Luiz Inácio Lula da Silva, Brazil's most popular president, from running again for president.

There's no denying corruption is a menace in Brazilian politics, but it infects politicians across the political spectrum, from former speaker of the house Eduardo Cunha, who led the impeachment charges against Rousseff to 2014 presidential candidate and senator Aécio Neves, to Temer himself. Yet with the help of the right-wing controlled media and politicized judiciary, "anti-PTismo" has convinced millions of voters that the PT is the most corrupt party in the country's history and that anyone else is a better option. At the same time, voters have shunned traditional right-wing parties like Temer’s, whose candidate didn’t even make it into the second round. As the pieces below attest, Bolsonaro stands in open admiration of the country's military dictatorship, and his presidency will put the entire basis of democracy at risk.

The following pieces bring together NACLA's recent analysis of the Brazilian elections and politics, which lend a critical progressive analysis of what forces have aligned to propel Bolsonaro’s popularity, what is at stake, and what could be to come.

The Workers’ Party’s presidential candidate stands between Brazil and fascism. Fernando Haddad’s time as both Education Minister and mayor of São Paulo attests to the kinds of progressive policies he would promote as president.

The fascistic Jair Bolsonaro nearly scraped a first-round victory in Brazil, an ominous sign for both the Left and for the country’s democracy. But the values he espouses go far beyond Brazil, and it is up to the Left to devise new alternatives.

The strength of far-right demagogue Jair Bolsonaro in the first round of the Brazilian elections puts the country well on its way to being the next victim of a reactionary-populist international groundswell.

Over the past half-century, NACLA’s coverage of Brazil, from the magazine’s founding in the heat of the Brazilian dictatorship to the rise and fall of the Workers’ Party, has encouraged solidarity and critical analysis of the country’s Left.

To understand Brazil’s deterioration over the past four years, we must look not only to its economic crisis but also to the ongoing conservative backlash against the poor and vulnerable.

Latin America's largest economy is in disarray; its historic Workers Party faces destruction, and its radical left searches for a response.

The second installment of our coverage on Lula’s conviction.

Why Rio de Janeiro's Pacifying Police Units and efforts to reform Brazil's Military Police have failed to bring peace and security to the favelas.

As corruption charges plague both sides of the political spectrum, a slew of controversial austerity proposals from the Temer government exacerbate polarization in Brazil.

For over a decade, antiracist movements in Brazil have sought justice for the killing of Black Brazilians by state forces.

A conversation with NACLA contributor Ben Cowan about the recent right turn in Brazilian politics.

Facing extreme budget cuts by the illegitimate government of President Michel Temer, student activists are occupying schools in the name of public education.