A collection of NACLA's coverage spanning more than a decade of Evo Morales's time in power to help contextualize turmoil in Bolivia. 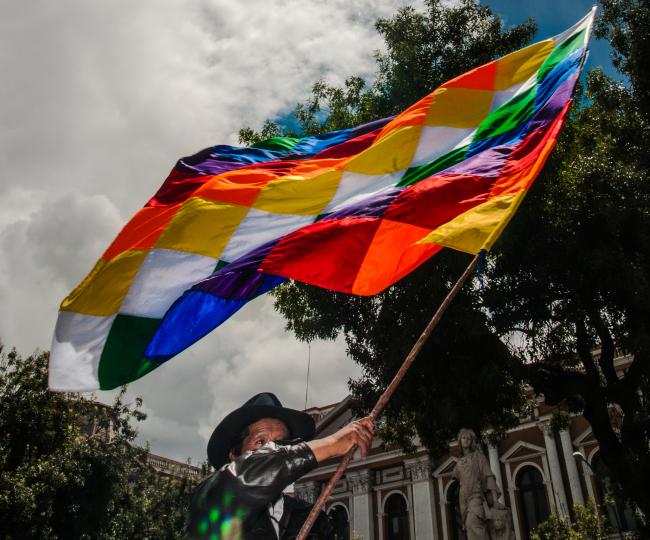 Bolivia witnessed a coup on November 10 amid cries of fraud in the October general election and simmering discontent over Evo Morales’s bid for another presidential term despite a 2016 referendum ruling out his reelection. The conservative Right has grabbed power, unleashed harsh repression, and demonstrated overtly colonialist and anti-Indigenous sentiments. Since the October 20 election, 32 people have been killed—29 since Morales stepped down—and hundreds have been injured, according to Bolivia’s human rights ombuds office, including victims shot when security forces opened fire on protesters. Last week, police tear gassed a funeral procession in La Paz mourning eight victims killed in a military operation.

The de facto government headed by Jeanine Añez has given the green light to a new election, though a date has not yet been set. Morales and his vice president will not be allowed to stand for reelection.

To understand recent events, it is crucial to signal the tension between the Movement Towards Socialism (MAS) government’s redistributive policies and reliance on extractive industries. The MAS government changed the rules of foreign investment, pushing back against foreign capital and asserting a larger role for the state, but sparked controversy for pursuing gas fracking, favoring the agribusiness industry, and furthering extractivism. Although Bolivia under Morales has seen substantial economic growth and poverty reduction, the policies bringing this change about have alienated some former supporters. The TIPNIS conflict, for example, showcases how extractivist projects provided the ground for tensions within his supporter base.

Meanwhile, the government’s neglect of environmental and Indigenous-centered policies coupled with growing clientelism, nepotism, corruption, and lack of space for criticism, stoked opposition. Morales’s government also failed to capture the support of a young and newly constituted middle class that has not known an alternative to the MAS. While protests against alleged vote tampering in the three weeks leading up to Morales’s ouster included a range of demonstrators—disillusioned leftists and former supporters Morales’s MAS, the new middle class, and traditional conservative elites—the reactionary, revanchist Right has violently seized the country.

The following collection of NACLA’s coverage spanning much of Morales's time in office helps to contextualize recent events and Bolivia’s long history of popular struggles against neoliberalism, racism, and U.S. interventionism.