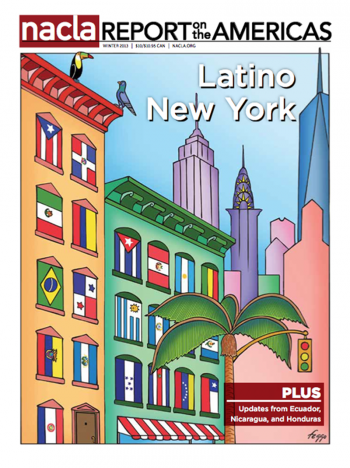 In the mid-1970s the New York media alerted the public to a “Latin Boom” in the big city. Back then it was the salsa craze, the emergence of a new wave of politicians and activists, and the surpassing of the one million threshold in the Latino population. Since then, each passing decade has brought on new assertions of a breakthrough moment. Four decades and over a million Latinos later, we seem to be on the verge of another boom.

A Tribute to Saul Landau
Timothy Harding
Saul Landau died at the age of 77. He was the Renaissance man of Latin American studies: a filmmaker, essayist, professor, novelist, and poet. I was honored to be Saul’s friend since we were graduate students at Stanford. Saul was a protégé of sociologist C. Wright Mills, under whom he studied at the University of Wisconsin. He helped Mills with his famous defense of the Cuban Revolution, Listen Yankee: The Revolution in Cuba.

Who Likes “Democracy”?
Fred Rosen
The Chile-based, private polling agency Latinobarómetro recently released its annual opinion poll measuring, among other things, Latin American attitudes toward “democracy.” While “democracy” is a politically loaded term, and therefore left in quotation marks throughout this brief essay, the responses of some 20,000 citizens from 18 Latin American countries (all save Cuba) suggest a great deal about the 2013 state of politics in the region—with some particularly interesting results about Venezuela and Mexico.

Ecuador: Extractivism for the Twenty-First Century?
Adam Chimienti and Sebastian Matthes
Throughout Ecuador, billboards and state newspapers promote the idea that a “citizen’s revolution” is underway. Indeed, many international observers look to Ecuador as a radical and exciting model, with the hope that the country will create a new development strategy making environmentalism a core concern.

A Chance to Move Leftward
Ed Morales
Building Power from the Ground Up: Mexican Civil Society in New York
Alfonso Gonzales
Mexicans in NewYork are engaged in a daily struggle for power and dignity at the level of civil society—the private associations and organizations that are outside the formal apparatus of government or economy.
Latino New York: An Introduction
Andrés Torres
NewYork's growing Hispanic presence reflects a long-term steady rise. The population may eventually reach a plateau, but there is no going back as new arrivals keep coming, and as successive generations of native Latinos make the city their home.
Latinos in the World of Work: An Interview with Hector Figueroa
Fred Rosen
Hector Figueroa is the president of Local 32BJ of the Service Employees International Union (SEIU), which principally organizes immigrant workers. Figueroa spoke with Fred Rosen at the union’s Manhattan headquarters.
Paqueteros: Connecting the Old Life with the New
Cynthia Santos-Briones
The ties between migrants and their families have also been reaffirmed and sustained by exchanging cultural products sent through an informal messenger system that has arisen within the community itself.
Stop-and-Frisk: The Policing of Latinos in New York
Andrés García
The NewYork Police Department (NYPD) practice of “stop-and-frisk” has become a major source of controversy in NewYork politics, representing either effective policing or racial harassment.
Strivers into Patients: How Public Prenatal Care May Disempower Future Citizens
Alyshia Gálvez
NewYork is among the most generous states nationwide in its inclusion of undocumented immigrants in public prenatal care. Public prenatal care settings are not immune however to larger discourses in the United States about immigrants and their consumption of public resources.
The Changing Face of Latino Politics in New York
Ed Morales
The Latino political presence in NewYork City politics is marked by a central contradiction: a fast-growing electorate is being represented by an increasing number of elected officials, but it does not yet have the political clout that it deserves.

A Convoluted March to Modernity
Naomi Glassman
It is all too easy to find yourself on one extreme or the other regarding the inexorable march of modernity and the associated disappearance of indigenous cultures. The benefits of electricity, running water, and sewage systems are obvious, followed by literacy and education, in enabling economic development and trade in our increasingly globalized world.
De Cesare's Grim Photos
Esther Portillo-Gonzales
Before I ever heard marero, a word commonly used in El Salvador and the United States to describe a gang member, I vividly remember walking home from school in the late 1980s with my older brother and cousins and witnessing the rounding up of youth in our Los Angeles neighborhood. Yellow police tape often blocked off sidewalks, and police sirens kept us up at night.
Ghosts of Oscar Lewis
Michael J. Bustamonte
In early 1969, ten years after the triumph of the Cuban Revolution, eminent U.S. anthropologist Oscar Lewis arrived in Havana to undertake an unprecedented oral history project. Focusing on former slum dwellers transferred to government-built housing, Lewis and a bi-national team of collaborators sought to test whether targeted beneficiaries of socialist state building had escaped what the University of Illinois professor called, controversially, the “culture of poverty.”
The United States and Cuba: A Half Century of Aggression
Hobart A. Spalding
These two books treat relations between the United States and Cuba. They show in detail the formulation and impact of U.S. policy on the island over time and discuss Cuban initiatives and responses. They also look at international events. Both include brief historical summaries starting from the war of 1898.
Trotsky, His Assassin, and the Cuban Who Tells Their Story
Susan Metz
Leonardo Padura Fuentes was born in Havana and grew up in the dusty popular neighborhood of Mantilla, in the south of the city where his grandfather was born. He studied at the local pre-university and then at the University of Havana—philology and Latin American literature, though he wanted journalism.

The Hypocrisy of Human Rights Watch
Keane Bhatt
Over more than a decade, the rise of the left in Latin American governance has led to remarkable advances in poverty alleviation, regional integration, and a reassertion of sovereignty and independence. The United States has been antagonistic toward the new left governments, and has concurrently pursued a bellicose foreign policy, in many cases blithely dismissive of international law.

Garbage, Health, and Well-Being in Managua
Christopher D. Hartmann
Long described as a city “drowning in garbage,” Managua is ground zero in the fight against unsightly municipal solid waste in Nicaragua. The completion of a large-scale international development project involving the capital city’s only waste site in February 2013, together with the announcement of the “Vivir Bonito” (Live Pretty) national health and well-being campaign a month earlier, may be changing the ways Nicaraguans think about garbage.
Prying Native People from Native Lands: Narco Business in Honduras
K. McSweeney, Z. Pearson
At last, there is good news from Honduras. Well, maybe. In September, the government of President Porfirio Lobo granted Miskitu people formal ownership over almost 3,000 square miles of their ancestral territory in the northeastern region known as La Mosquitia. This appears to be a vital victory in indigenous Hondurans’ struggle for territorial autonomy. But it can also be read as a deeply cynical gesture by a government that, facing an upcoming election, was keen to distract attention from its otherwise appalling record on native rights and its avaricious approach to indigenous lands and resources.
Washington and São Paulo: Spying and a Fading Friendship
Mark Weisbrot
The only thing missing from Brazilian President Dilma Rousseff’s speech at the UN General Assembly last month was “it still smells like sulfur.” For those who don’t remember, these were the immortal words of Venezuela’s President Hugo Chávez in 2006, describing the podium where “the Devil”—his name for President George W. Bush—had spoken the day before. Chávez’s speech received hearty applause and prompted some New Yorkers to hang a banner from a highway overpass that said “Wake Up and Smell the Sulfur.”

The Disappeared
Mario Benedetti
The terrifying revelations made by a navy captain of the “death flights” carried out during Argentina’s dirty war show that memory will always fight to come to the surface. Consigning it to oblivion is pointless, hypocritical and perverse. A scandal was unleashed in Argentina in March in the wake of the terrifying revelations made by corvette-ship captain Adolfo Scilingo of the practice of throwing men and women to their death from airplanes during the military dictatorship (1976-83). That scandal gives rise to more than one interpretation. Of course, the  first of these has to do with horror.