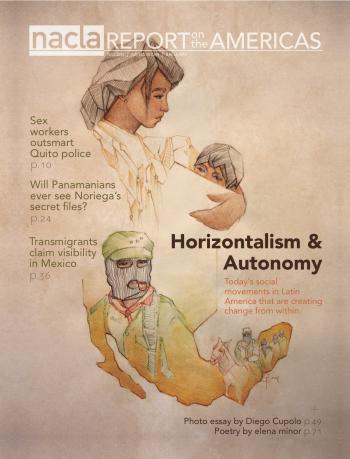 Today's social movements in Latin America that are creating change from within.

Editor’s Note
Marina Sitrin and Colette Perold
Over the past three years, the use of horizontalism to describe new social relationships under construction has proliferated.

From Around the Region

Conceiving While Poor, Imprisoned for Murder
Jocelyn Viterna
Although a rallying cry for the global abortion rights movement, these 17 Salvadoran women did not purposefully end their own pregnancies. Instead, they suffered a combination of obstetrical complications and poverty.

Latin America’s Risky China Boom
Rebecca Ray
With raw material exports at the center of a fast-growing trade relationship with China, Latin American countries face disproportionate economic, social, and environmental risks, and should be bracing for them now.

Panama’s Stolen Archive
Ezer Vierba
Panamanians may be able to see Noriega’s secret files—and to reclaim their troubled past.

The Struggle to Democratize Education in Mexico
María de la Luz Arriaga Lemus
For the past two years, teachers unions have battled the Peña Nieto administration’s creeping authoritarianism, democratizing the movement in the process.

Venezuela Before and After the Protests (An Interview with María Pilar García-Guadilla)
Alejandro Velasco
María Pilar García Guadilla discusses the violent protests that shook Venezuela this year, and their impact on the legacy and policy goals of Chavismo today.

(r)evolutionary Horizontal and Autonomous Organizing in Cuba
Marina Sitrin
The past 15 years in Cuba have witnessed a resurgence of groups who focus on self-organization, use the assembly form as a way of making decisions, and are dedicated to non-hierarchical forms of organization.

ALBA-TCP: Building Solidarity and Autonomy Among Nations
Dario Azzellini
The ALBA-TCP aims at consolidating a regional space of social, cultural, and economic integration based on the prioritization of social rights and welfare, barter, and mutual support.

Community Resistance Against Extraction
Raúl Zibechi
In Peru and Argentina, local communities are mobilizing to halt mega extraction projects, creating new models for movement building based in the defense of the environment.

Definitions of Horizontalism and Autonomy
Marina Sitrin
More than merely a tool for assemblies, horizontalism is a new way of relating, based in affective politics and mutual empowerment.

Lessons of Autonomy From Brazil’s Bus Fare Struggle
Vanessa Zettler
Brazil's bus fare increase was the spark that unleashed a larger political process that had been simmering for years.

The Death and Resurrection of the Zapatista “Galeano” in Three Acts
Gisela Martínez and Aldabi Olvera
At the end of his speech, one thing is clear: Galeano is and will continue to be the unforgettable companion.

The New “What To Do?”
Gustavo Esteva
How civil society is re-encountering itself in Mexico, from the 1985 earthquake reconstruction to the Zapatistas.

Water Beyond the State
Marcela Olivera
Cochabamba’s water committees continue to reinvent Bolivian autonomous traditions in the face of a newly redefined, but highly centralist state.

Making New Sense of Pro-Migrant Tensions
David M. Hernández
The pro-migrant bloc is split between those with mainstream institutional support and those without it. Their opposing visions of justice start here.

Disposable Children
Like the tip of an iceberg, the appearance of millions of street children in Latin American cities represents a tragedy of great proportions.